The Riemann sphere can be visualized as the complex number plane wrapped around a sphere (by some form of stereographic projection – details are given below).

In mathematics, the Riemann sphere, named after the 19th century mathematician Bernhard Riemann, is a model of the extended complex plane, the complex plane plus a point at infinity. This extended plane represents the extended complex numbers, that is, the complex numbers plus a value ∞ for infinity. With the Riemann model, the point "∞" is near to very large numbers, just as the point "0" is near to very small numbers.

The extended complex numbers are useful in complex analysis because they allow for division by zero in some circumstances, in a way that makes expressions such as 1/0 = ∞ well-behaved. For example, any rational function on the complex plane can be extended to a continuous function on the Riemann sphere, with the poles of the rational function mapping to infinity. More generally, any meromorphic function can be thought of as a continuous function whose codomain is the Riemann sphere.

In geometry, the Riemann sphere is the prototypical example of a Riemann surface, and is one of the simplest complex manifolds. In projective geometry, the sphere can be thought of as the complex projective line P1(C), the projective space of all complex lines in C2. As with any compact Riemann surface, the sphere may also be viewed as a projective algebraic curve, making it a fundamental example in algebraic geometry. It also finds utility in other disciplines that depend on analysis and geometry, such as quantum mechanics and other branches of physics.

Addition of complex numbers may be extended by defining, for z ∈ C,

for any complex number z, and multiplication may be defined by

for all nonzero complex numbers z, with ∞ ⋅ ∞ = ∞. Note that ∞ + ∞, ∞ – ∞ and 0 ⋅ ∞ are left undefined. Unlike the complex numbers, the extended complex numbers do not form a field, since ∞ does not have a multiplicative inverse. Nonetheless, it is customary to define division on C ∪ {∞} by

Any rational function f(z) = g(z)/h(z) (in other words, f(z) is the ratio of polynomial functions g(z) and h(z) of z with complex coefficients, such that g(z) and h(z) have no common factor) can be extended to a continuous function on the Riemann sphere. Specifically, if

is a complex number such that the denominator

is zero but the numerator

For example, given the function

As a complex manifold

Intuitively, the transition maps indicate how to glue two planes together to form the Riemann sphere. The planes are glued in an "inside-out" manner, so that they overlap almost everywhere, with each plane contributing just one point (its origin) missing from the other plane. In other words, (almost) every point in the Riemann sphere has both a ζ value and a ξ value, and the two values are related by ζ = 1/ξ. The point where ξ = 0 should then have ζ-value "1/0"; in this sense, the origin of the ξ-chart plays the role of "∞" in the ζ-chart. Symmetrically, the origin of the ζ-chart plays the role of ∞ in the ξ-chart.

Topologically, the resulting space is the one-point compactification of a plane into the sphere. However, the Riemann sphere is not merely a topological sphere. It is a sphere with a well-defined complex structure, so that around every point on the sphere there is a neighborhood that can be biholomorphically identified with C.

On the other hand, the uniformization theorem, a central result in the classification of Riemann surfaces, states that the only simply-connected one-dimensional complex manifolds are the complex plane, the hyperbolic plane, and the Riemann sphere. Of these, the Riemann sphere is the only one that is a closed surface (a compact surface without boundary). Hence the two-dimensional sphere admits a unique complex structure turning it into a one-dimensional complex manifold.

As the complex projective line

The Riemann sphere can also be defined as the complex projective line. This is the subset of C2 consisting of all pairs (α, β) of complex numbers, not both zero, modulo the equivalence relation

for all nonzero complex numbers λ. The complex plane C, with coordinate ζ, can be mapped into the complex projective line by

These two complex charts cover the projective line. For nonzero ξ and ζ the following identifications

The Riemann sphere can be visualized as the unit sphere x2 + y2 + z2 = 1 in the three-dimensional real space R3. To this end, consider the stereographic projection from the unit sphere minus the point (0, 0, 1) onto the plane z = 0, which we identify with the complex plane by ζ = x + iy. In Cartesian coordinates (x, y, z) and spherical coordinates (φ, θ) on the sphere (with φ the zenith and θ the azimuth), the projection is

Similarly, stereographic projection from (0, 0, −1) onto the plane z = 0, identified with another copy of the complex plane by ξ = x − i y, is written

In order to cover the unit sphere, one needs the two stereographic projections: the first will cover the whole sphere except the point (0, 0, 1) and the second except the point (0, 0, −1). Hence, one needs two complex planes, one for each projection, which can be intuitively seen as glued back-to-back at z = 0. Note that the two complex planes are identified differently with the plane z = 0. An orientation-reversal is necessary to maintain consistent orientation on the sphere, and in particular complex conjugation causes the transition maps to be holomorphic.

The transition maps between ζ-coordinates and ξ-coordinates are obtained by composing one projection with the inverse of the other. They turn out to be ζ = 1/ξ and ξ = 1/ζ, as described above. Thus the unit sphere is diffeomorphic to the Riemann sphere.

In the case of the Riemann sphere, the Gauss–Bonnet theorem implies that a constant-curvature metric must have positive curvature K. It follows that the metric must be isometric to the sphere of radius

in R3 via stereographic projection. In the ζ-chart on the Riemann sphere, the metric with K = 1 is given by

In real coordinates ζ = u + iv, the formula is

Up to a constant factor, this metric agrees with the standard Fubini–Study metric on complex projective space (of which the Riemann sphere is an example).

Conversely, let S denote the sphere (as an abstract smooth or topological manifold). By the uniformization theorem there exists a unique complex structure on S, up to conformal equivalence. It follows that any metric on S is conformally equivalent to the round metric. All such metrics determine the same conformal geometry. The round metric is therefore not intrinsic to the Riemann sphere, since "roundness" is not an invariant of conformal geometry. The Riemann sphere is only a conformal manifold, not a Riemannian manifold. However, if one needs to do Riemannian geometry on the Riemann sphere, the round metric is a natural choice (with any fixed radius, though radius = 1 is the simplest and most common choice). That is because only a round metric on the Riemann sphere has its isometry group be a 3-dimensional group. (Namely, the group known as SO(3), a continuous ("Lie") group that is topologically the 3-dimensional projective space P3.) 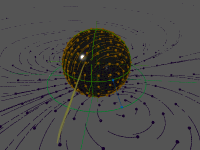 A Möbius transformation acting on the sphere, and on the plane by stereographic projection

The study of any mathematical object is aided by an understanding of its group of automorphisms, meaning the maps from the object to itself that preserve the essential structure of the object. In the case of the Riemann sphere, an automorphism is an invertible biholomorphic map from the Riemann sphere to itself. It turns out that the only such maps are the Möbius transformations. These are functions of the form

where a, b, c, and d are complex numbers such that

If one endows the Riemann sphere with the Fubini–Study metric, then not all Möbius transformations are isometries; for example, the dilations and translations are not. The isometries form a proper subgroup of PGL(2, C), namely PSU(2). This subgroup is isomorphic to the rotation group SO(3), which is the group of symmetries of the unit sphere in R3 (which, when restricted to the sphere, become the isometries of the sphere).