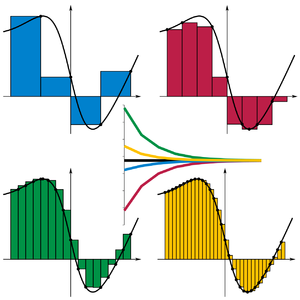 In mathematics, a Riemann sum is an approximation of the area of a region, often the region underneath a curve. It is named after German mathematician Bernhard Riemann.

The sum is calculated by dividing the region up into shapes (rectangles or trapezoids) that together form a region that is similar to the region being measured, then calculating the area for each of these shapes, and finally adding all of these small areas together. This approach can be used to find a numerical approximation for a definite integral even if the fundamental theorem of calculus does not make it easy to find a closed-form solution.

be a partition of I, where

Notice the use of "a" instead of "the" in the previous sentence. This is due to the fact that the choice of

is arbitrary, so for any given function f defined on an interval I and a fixed partition P, one might produce different Riemann sums depending on which

is chosen, as long as

give us different types of Riemann sums:

is the supremum of f over

, then S is defined to be an upper Riemann sum.

{{#invoke:Multiple image|render}} Any Riemann sum on a given partition (that is, for any choice of

The four methods of Riemann summation are usually best approached with partitions of equal size. The interval [a, b] is therefore divided into n subintervals, each of length

The points in the partition will then be

For the left Riemann sum, approximating the function by its value at the left-end point gives multiple rectangles with base Δx and height f(a + iΔx). Doing this for i = 0, 1, ..., n − 1, and adding up the resulting areas gives

f is here approximated by the value at the right endpoint. This gives multiple rectangles with base Δx and height f(a + iΔx). Doing this for i = 1, ..., n, and adding up the resulting areas produces

The error of this formula will be

In this case, the values of the function f on an interval are approximated by the average of the values at the left and right endpoints. In the same manner as above, a simple calculation using the area formula

for a trapezium with parallel sides b1, b2 and height h produces

The error of this formula will be

The approximation obtained with the trapezoid rule for a function is the same as the average of the left hand and right hand sums of that function.

The value of the Riemann sum under the curve y = x2 from 0 to 2. As the number of rectangles increases, it approaches the exact area of 8/3.

Taking an example, the area under the curve of y = x2 between 0 and 2 can be procedurally computed using Riemann's method.

The interval [0, 2] is firstly divided into n subintervals, each of which is given a width of

; these are the widths of the Riemann rectangles (hereafter "boxes"). Because the right Riemann sum is to be used, the sequence of x coordinates for the boxes will be

. Therefore, the sequence of the heights of the boxes will be

. It is an important fact that

The area of each box will be

and therefore the nth right Riemann sum will be:

If the limit is viewed as n → ∞, it can be concluded that the approximation approaches the actual value of the area under the curve as the number of boxes increases. Hence:

This method agrees with the definite integral as calculated in more mechanical ways: