In mathematics, a root system is a configuration of vectors in a Euclidean space satisfying certain geometrical properties. The concept is fundamental in the theory of Lie groups and Lie algebras. Since Lie groups (and some analogues such as algebraic groups) and Lie algebras have become important in many parts of mathematics during the twentieth century, the apparently special nature of root systems belies the number of areas in which they are applied. Further, the classification scheme for root systems, by Dynkin diagrams, occurs in parts of mathematics with no overt connection to Lie theory (such as singularity theory). Finally, root systems are important for their own sake, as in graph theory in the study of eigenvalues. 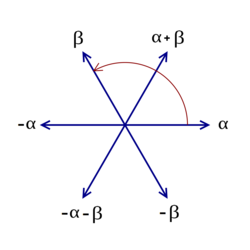 The six vectors of the root system A2.

As a first example, consider the six vectors in 2-dimensional Euclidean space, R2, as shown in the image at the right; call them roots. These vectors span the whole space. If you consider the line perpendicular to any root, say β, then the reflection of R2 in that line sends any other root, say α, to another root. Moreover, the root to which it is sent equals α+ n β , where n is an integer (in this case, n equals 1). These six vectors satisfy the following definition, and therefore they form a root system; this one is known as A2.

Let V be a finite-dimensional Euclidean vector space, with the standard Euclidean inner product denoted by

. A root system in V is a finite set Φ of non-zero vectors (called roots) that satisfy the following conditions:[1][2] Template:Ordered list An equivalent way of writing conditions 3 and 4 is as follows:

In view of property 3, the integrality condition is equivalent to stating that β and its reflection σα(β) differ by an integer multiple of α. Note that the operator

defined by property 4 is not an inner product. It is not necessarily symmetric and is linear only in the first argument.

The rank of a root system Φ is the dimension of V. Two root systems may be combined by regarding the Euclidean spaces they span as mutually orthogonal subspaces of a common Euclidean space. A root system which does not arise from such a combination, such as the systems A2, B2, and G2 pictured to the right, is said to be irreducible.

Two root systems (E1, Φ1) and (E2, Φ2) are called isomorphic if there is an invertible linear transformation E1 → E2 which sends Φ1 to Φ2 such that for each pair of roots, the number

The group of isometries of V generated by reflections through hyperplanes associated to the roots of Φ is called the Weyl group of Φ. As it acts faithfully on the finite set Φ, the Weyl group is always finite.

The Template:Visible anchor of a root system Φ is the Z-submodule of V generated by Φ. It is a lattice in V.

There is only one root system of rank 1, consisting of two nonzero vectors

. This root system is called

In rank 2 there are four possibilities, corresponding to

. Note that a root system that generates a lattice is not unique:

generate a square lattice while

generate a hexagonal lattice, only two of the five possible types of lattices in two dimensions.

The concept of a root system was originally introduced by Wilhelm Killing around 1889 (in German, Wurzelsystem[7]).[8] He used them in his attempt to classify all simple Lie algebras over the field of complex numbers. Killing originally made a mistake in the classification, listing two exceptional rank 4 root systems, when in fact there is only one, now known as F4. Cartan later corrected this mistake, by showing Killing's two root systems were isomorphic.[9]

Killing investigated the structure of a Lie algebra

, by considering (what is now called) a Cartan subalgebra

. Then he studied the roots of the characteristic polynomial

. Here a root is considered as a function of

, or indeed as an element of the dual vector space

. This set of roots form a root system inside

, as defined above, where the inner product is the Killing form.[10] 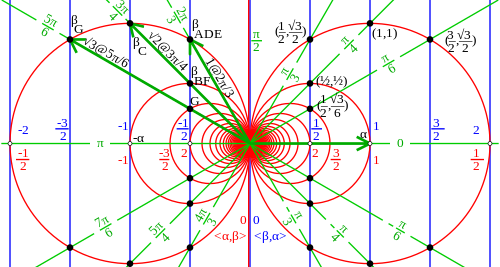 The integrality condition for <β, α> is fulfilled only for β on one of the vertical lines, while the integrality condition for <α, β> is fulfilled only for β on one of the red circles. Any β perpendicular to α (on the Y axis) trivially fulfills both with 0, but does not define an irreducible root system.
Modulo reflection, for a given α there are only 5 nontrivial possibilities for β, and 3 possible angles between α and β in a set of simple roots. Subscript letters correspond to the series of root systems for which the given β can serve as the first root and α as the second root. (or in F4 as the middle 2 roots)

The cosine of the angle between two roots is constrained to be a half-integral multiple of a square root of an integer. This is because

are both integers, by assumption, and

, the only possible values for

Given a root system Φ we can always choose (in many ways) a set of positive roots. This is a subset

of Φ such that

If a set of positive roots

is chosen, elements of

of simple roots is a basis of

with the property that every vector in

is a linear combination of elements of 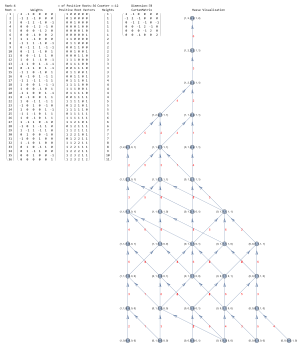 The set of positive roots is naturally ordered by saying that

is a nonnegative linear combination of simple roots. This poset is graded by

, and has many remarkable combinatorial properties, one of them being that one can determine the degrees of the fundamental invariants of the corresponding Weyl group from this poset.[11] The Hasse graph is a visualization of the ordering of the root poset.

{{#invoke:see also|seealso}} If Φ is a root system in V, the coroot αV of a root α is defined by

Pictures of all the irreducible Dynkin diagrams

Given a root system, select a set Δ of simple roots as in the preceding section. The vertices of the associated Dynkin diagram correspond to vectors in Δ. An edge is drawn between each non-orthogonal pair of vectors; it is an undirected single edge if they make an angle of

radians, a directed double edge if they make an angle of

radians, and a directed triple edge if they make an angle of

radians. The term "directed edge" means that double and triple edges are marked with an angle sign pointing toward the shorter vector.

Although a given root system has more than one possible set of simple roots, the Weyl group acts transitively on such choices. Consequently, the Dynkin diagram is independent of the choice of simple roots; it is determined by the root system itself. Conversely, given two root systems with the same Dynkin diagram, one can match up roots, starting with the roots in the base, and show that the systems are in fact the same.

The actual connected diagrams are as follows. The subscripts indicate the number of vertices in the diagram (and hence the rank of the corresponding irreducible root system).

Properties of the irreducible root systems

In an irreducible root system there can be at most two values for the length (α, α)1/2, corresponding to short and long roots. If all roots have the same length they are taken to be long by definition and the root system is said to be simply laced; this occurs in the cases A, D and E. Any two roots of the same length lie in the same orbit of the Weyl group. In the non-simply laced cases B, C, G and F, the root lattice is spanned by the short roots and the long roots span a sublattice, invariant under the Weyl group, equal to r2/2 times the coroot lattice, where r is the length of a long root.

In the table to the right, |Φ < | denotes the number of short roots, I denotes the index in the root lattice of the sublattice generated by long roots, D denotes the determinant of the Cartan matrix, and |W| denotes the order of the Weyl group.

Let V be the subspace of Rn+1 for which the coordinates sum to 0, and let Φ be the set of vectors in V of length √2 and which are integer vectors, i.e. have integer coordinates in Rn+1. Such a vector must have all but two coordinates equal to 0, one coordinate equal to 1, and one equal to –1, so there are n2 + n roots in all. One choice of simple roots expressed in the standard basis is: αi = ei – ei+1, for 1 ≤ i ≤ n.

The An root lattice - that is, the lattice generated by the An roots - is most easily described as the set of integer vectors in Rn+1 whose components sum to zero.

The A3 root lattice is known to crystallographers as the face-centered cubic (fcc) (or cubic close packed) lattice.[13]

The Bn root lattice - that is, the lattice generated by the Bn roots - consists of all integer vectors.

B1 is isomorphic to A1 via scaling by √2, and is therefore not a distinct root system.

The Cn root lattice - that is, the lattice generated by the Cn roots - consists of all integer vectors whose components sum to an even integer.

C2 is isomorphic to B2 via scaling by √2 and a 45 degree rotation, and is therefore not a distinct root system.

Root system B3, C3, and A3=D3 as points within a cube and octahedron

Reflection through the hyperplane perpendicular to αn is the same as transposing and negating the adjacent n-th and (n – 1)-th coordinates. Any simple root and its reflection perpendicular to another simple root differ by a multiple of 0 or 1 of the second root, not by any greater multiple.

The Dn root lattice - that is, the lattice generated by the Dn roots - consists of all integer vectors whose components sum to an even integer. This is the same as the Cn root lattice.

D3 reduces to A3, and is therefore not a distinct root system.

The root system has 240 roots. The set just listed is the set of vectors of length √2 in the E8 root lattice, also known simply as the E8 lattice or Γ8. This is the set of points in R8 such that:

One choice of simple roots for E8 in the even coordinate system with rows ordered by node order in the alternate (non-canonical) Dynkin diagrams (above) is:

(the above choice of simple roots for D7) along with

One choice of simple roots for E8 in the odd coordinate system with rows ordered by node order in alternate (non-canonical) Dynkin diagrams (above) is:

(the above choice of simple roots for A7) along with

48-root vectors of F4, defined by vertices of the 24-cell and its dual, viewed in the Coxeter plane

The root system G2 has 12 roots, which form the vertices of a hexagram. See the picture above.

In each case, the roots are non-zero weights of the adjoint representation.

In the case of a simply connected simple compact Lie group G with maximal torus T, the root lattice can naturally be identified with Hom(T, T) and the coroot lattice with Hom(T, T), where T is the circle group; see Template:Harvtxt.

For connections between the exceptional root systems and their Lie groups and Lie algebras see E8, E7, E6, F4, and G2.