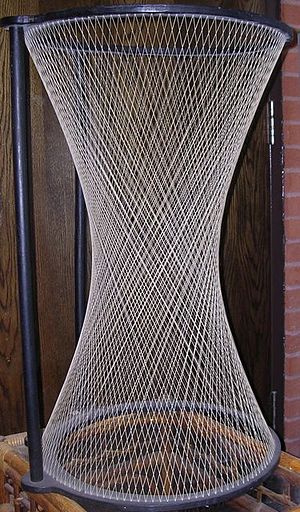 A hyperboloid of one sheet is a doubly ruled surface: it can be generated by either of two families of straight lines.

In geometry, a surface S is ruled (also called a scroll) if through every point of S there is a straight line that lies on S. The most familiar examples (illustrated here in three-dimensional Euclidean space) are the plane and the curved surface of a cylinder or cone. Other examples are a conical surface with elliptical directrix, the right conoid, the helicoid, and the tangent developable of a smooth curve in space.

A ruled surface can always be described (at least locally) as the set of points swept by a moving straight line. For example, a cone is formed by keeping one point of a line fixed whilst moving another point along a circle.

is the generic point on the surface,

is a point that traces a curve lying on the surface, and

is a unit-length vector that traces a curve on the unit sphere. Thus, for example, if one uses

one obtains a ruled surface that contains the Möbius strip.

Alternatively, a ruled surface can be parametrized as

are two non-intersecting curves lying on the surface. In particular, when

move with constant speed along two skew lines, the surface is a hyperbolic paraboloid, or a piece of an hyperboloid of one sheet.

Doubly ruled surfaces are the inspiration for curved hyperboloid structures that can be built with a latticework of straight elements, namely:

The RM-81 Agena rocket engine employed straight cooling channels that were laid out in a ruled surface to form the throat of the nozzle section.