. If the symmetry of this function spans the totally symmetric representation of the point group to which the atom or molecule belongs then its value is not zero and the transition is allowed. Otherwise, the transition is forbidden. The idea of symmetry is important when considering the integral of odd functions (which equal zero when integrated over the whole of space).

The wave function of a single electron is the product of a space-dependent wave function and a spin wave function. Spin is directional and can be said to have odd parity. It follows that transitions in which the spin "direction" changes are forbidden. In formal terms, only states with the same total spin quantum number are "spin-allowed".[5] In crystal field theory, d-d transitions that are spin-forbidden are much weaker than spin-allowed transitions. Both can be observed, in spite of the Laporte rule, because the actual transitions are coupled to vibrations that are anti-symmetric and have the same symmetry as the dipole moment operator.[6]

The molecule methane, CH4, may be used as an example to illustrate the application of these principles. The molecule is tetrahedral and has Td symmetry. The vibrations of methane span the representations A1 + E + 2T2.[8] Examination of the character table shows that all four vibrations are Raman-active, but only the T2 vibrations can be seen in the infrared spectrum.[9]

In the harmonic approximation, it can be shown that overtones are forbidden in both infrared and Raman spectra. However, when anharmonicity is taken into account, the transitions are weakly allowed.[10]

{{#invoke:main|main}} The selection rule for rotational transitions, derived from the symmetries of the rotational wave functions in a rigid rotor, is ΔJ = ±1, where J is a rotational quantum number.[11] 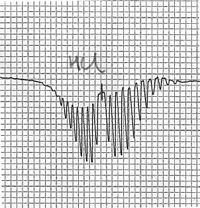 The infrared spectrum of HCl gas

The infrared spectrum of hydrogen chloride gas shows rotational fine structure superimposed on the vibrational spectrum. This is typical of the infrared spectra of heteronuclear diatomic molecules. It shows the so-called P and R branches. The Q branch, located at the vibration frequency, is absent. Symmetric top molecules display the Q branch. This follows from the application of selection rules.[13]

Resonance Raman spectroscopy involves a kind of vibronic coupling. It results in much-increased intensity of fundamental and overtone transitions as the vibrations "steal" intensity from an allowed electronic transition.[14] In spite of appearances, the selection rules are the same as in Raman spectroscopy.[15]

In general, electric (charge) radiation or magnetic (current, magnetic moment) radiation can be classified into multipoles Eλ (electric) or Mλ (magnetic) of order 2λ, e.g., E1 for electric dipole, E2 for quadrupole, or E3 for octupole. In transitions where the change in angular momentum between the initial and final states makes several multipole radiations possible, usually the lowest-order multipoles are overwhelmingly more likely, and dominate the transition.[16]

The emitted particle carries away an angular momentum λ, which for the photon must be at least 1, since it is a vector particle (i.e., it has JP = 1-). Thus, there is no E0 (electric monopoles) or M0 (magnetic monopoles, which do not seem to exist) radiation.

Since the total angular momentum has to be conserved during the transition, we have that

, and its z-projection is given by

are, respectively, the initial and final angular momenta of the atom. The corresponding quantum numbers λ and μ (z-axis angular momentum) must satisfy

while for magnetic multipoles

Semi-forbidden transitions (resulting in so-called intercombination lines) are electric dipole (E1) transitions for which the selection rule that the spin does not change is violated. This is a result of the failure of LS coupling.

is the total angular momentum,

is the Azimuthal quantum number,

is the Spin quantum number, and

is the secondary total angular momentum quantum number. Which transitions are allowed is based on the Hydrogen-like atom.

|CitationClass=book }} Chapter 4: The interaction of radiation with a crystal.