{{ safesubst:#invoke:Unsubst||$N=Refimprove |date=__DATE__ |$B= {{#invoke:Message box|ambox}} }} In mathematics, a separatrix refers to the boundary separating two modes of behaviour in a differential equation.

Consider the differential equation describing the motion of a simple pendulum:

denotes the length of the pendulum,

the gravitational acceleration and

the angle between the pendulum and vertically downwards. In this system there is a conserved quantity H (the Hamiltonian), which is given by

along the horizontal axis and

on the vertical axis - see the thumbnail to the right. The type of resulting curve depends upon the value of H. 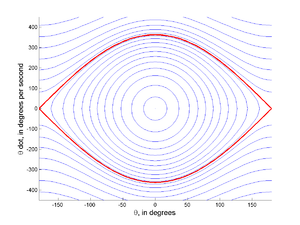 The phase space for the simple pendulum

then no curve exist (

then the curve will be a simple closed curve (see curve) which is nearly circular for small H and becomes "eye" shape when H approaches the upper bound. These curves correspond to the pendulum swinging periodically from side to side.

then the curve is open, and this corresponds to the pendulum forever swinging through complete circles.

In this system the separatix is the curve that corresponds to

. It separates (hence the name) the phase space into two distinct areas. The region inside the separatrix has all those phase space curves which correspond to oscillating motion back and forth of the pendulum (whose equation of motion is given above), whereas the region outside the separatrix has all the phase space curves which correspond to the motion with the pendulum continuously turning through vertical planar circles.