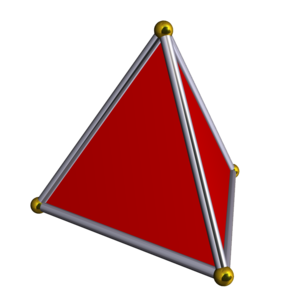 A regular 3-simplex or tetrahedron

In geometry, a simplex (plural simplexes or simplices) is a generalization of the notion of a triangle or tetrahedron to arbitrary dimensions. Specifically, a k-simplex is a k-dimensional polytope which is the convex hull of its k + 1 vertices. More formally, suppose the k + 1 points

are affinely independent, which means

are linearly independent. Then, the simplex determined by them is the set of points

A regular simplex[1] is a simplex that is also a regular polytope. A regular n-simplex may be constructed from a regular (n − 1)-simplex by connecting a new vertex to all original vertices by the common edge length.

The convex hull of any nonempty subset of the n+1 points that define an n-simplex is called a face of the simplex. Faces are simplices themselves. In particular, the convex hull of a subset of size m+1 (of the n+1 defining points) is an m-simplex, called an m-face of the n-simplex. The 0-faces (i.e., the defining points themselves as sets of size 1) are called the vertices (singular: vertex), the 1-faces are called the edges, the (n − 1)-faces are called the facets, and the sole n-face is the whole n-simplex itself. In general, the number of m-faces is equal to the binomial coefficient

. Consequently, the number of m-faces of an n-simplex may be found in column (m + 1) of row (n + 1) of Pascal's triangle. A simplex A is a coface of a simplex B if B is a face of A. Face and facet can have different meanings when describing types of simplices in a simplicial complex. See Simplicial complex#Definitions 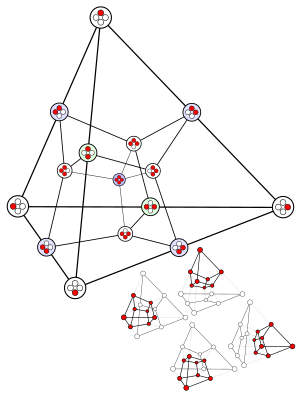 The total number of faces is always a power of two minus one. This figure (a projection of the tesseract) shows the centroids of the 15 faces of the tetrahedron.

In some conventions,[3] the empty set is defined to be a (−1)-simplex. The definition of the simplex above still makes sense if n = −1. This convention is more common in applications to algebraic topology (such as simplicial homology) than to the study of polytopes.

These Petrie polygon (skew orthogonal projections) show all the vertices of the regular simplex on a circle, and all vertex pairs connected by edges. 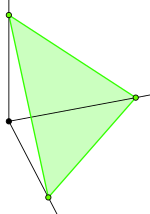 The standard 2-simplex in R3

The simplex Δn lies in the affine hyperplane obtained by removing the restriction ti ≥ 0 in the above definition.

The n+1 vertices of the standard n-simplex are the points ei ∈ Rn+1, where

There is a canonical map from the standard n-simplex to an arbitrary n-simplex with vertices (v0, …, vn) given by

More generally, there is a canonical map from the standard

These are known as generalized barycentric coordinates, and express every polytope as the image of a simplex:

An alternative coordinate system is given by taking the indefinite sum:

This yields the alternative presentation by order, namely as nondecreasing n-tuples between 0 and 1:

Geometrically, this is an n-dimensional subset of

(maximal dimension, codimension 0) rather than of

(codimension 1). The facets, which on the standard simplex correspond to one coordinate vanishing,

while the interior corresponds to the inequalities becoming strict (increasing sequences).

mostly disjoint simplices (disjoint except for boundaries), showing that this simplex has volume

Alternatively, the volume can be computed by an iterated integral, whose successive integrands are

A further property of this presentation is that it uses the order but not addition, and thus can be defined in any dimension over any ordered set, and for example can be used to define an infinite-dimensional simplex without issues of convergence of sums.

Projection onto the standard simplex

Especially in numerical applications of probability theory a projection onto the standard simplex is of interest. Given

on the simplex has coordinates

is chosen such that

can be easily calculated from sorting

complexity, which can be improved to

Finally, a simple variant is to replace "summing to 1" with "summing to at most 1"; this raises the dimension by 1, so to simplify notation, the indexing changes:

This yields an n-simplex as a corner of the n-cube, and is a standard orthogonal simplex. This is the simplex used in the simplex method, which is based at the origin, and locally models a vertex on a polytope with n facets.

The coordinates of the vertices of a regular n-dimensional simplex can be obtained from these two properties,

These can be used as follows. Let vectors (v0, v1, ..., vn) represent the vertices of an n-simplex center the origin, all unit vectors so a distance 1 from the origin, satisfying the first property. The second property means the dot product between any pair of the vectors is

. This can be used to calculate positions for them.

For example in three dimensions the vectors (v0, v1, v2, v3) are the vertices of a 3-simplex or tetrahedron. Write these as

Choose the first vector v0 to have all but the first component zero, so by the first property it must be (1, 0, 0) and the vectors become

By the second property the dot product of v0 with all other vectors is -Template:Frac, so each of their x components must equal this, and the vectors become

Next choose v1 to have all but the first two elements zero. The second element is the only unknown. It can be calculated from the first property using the Pythagorean theorem (choose any of the two square roots), and so the second vector can be completed:

The second property can be used to calculate the remaining y components, by taking the dot product of v1 with each and solving to give

From which the z components can be calculated, using the Pythagorean theorem again to satisfy the first property, the two possible square roots giving the two results

This process can be carried out in any dimension, using n + 1 vectors, applying the first and second properties alternately to determine all the values.

The oriented volume of an n-simplex in n-dimensional space with vertices (v0, ..., vn) is

where each column of the n × n determinant is the difference between the vectors representing two vertices. A derivation of a very similar formula can be found in.[6] Without the 1/n! it is the formula for the volume of an n-parallelepiped. One way to understand the 1/n! factor is as follows. If the coordinates of a point in a unit n-box are sorted, together with 0 and 1, and successive differences are taken, then since the results add to one, the result is a point in an n simplex spanned by the origin and the closest n vertices of the box. The taking of differences was a unimodular (volume-preserving) transformation, but sorting compressed the space by a factor of n!.

The volume under a standard n-simplex (i.e. between the origin and the simplex in Rn+1) is

as can be seen by multiplying the previous formula by xn+1, to get the volume under the n-simplex as a function of its vertex distance x from the origin, differentiating with respect to x, at

(where the n-simplex side length is 1), and normalizing by the length

, along the normal vector.

Simplexes with an "orthogonal corner"

Orthogonal corner means here, that there is a vertex at which all adjacent facets are pairwise orthogonal. Such simplexes are generalizations of right angle triangles and for them there exists an n-dimensional version of the Pythagorean theorem:

, which is the facet opposite the orthogonal corner.

For a 2-simplex the theorem is the Pythagorean theorem for triangles with a right angle and for a 3-simplex it is de Gua's theorem for a tetrahedron with a cube corner.

The Hasse diagram of the face lattice of an n-simplex is isomorphic to the graph of the (n+1)-hypercube's edges, with the hypercube's vertices mapping to each of the n-simplex's elements, including the entire simplex and the null polytope as the extreme points of the lattice (mapped to two opposite vertices on the hypercube). This fact may be used to efficiently enumerate the simplex's face lattice, since more general face lattice enumeration algorithms are more computationally expensive.

Topologically, an n-simplex is equivalent to an n-ball. Every n-simplex is an n-dimensional manifold with corners.

In probability theory, the points of the standard n-simplex in

-space are the space of possible parameters (probabilities) of the categorical distribution on n+1 possible outcomes.

A finite set of k-simplexes embedded in an open subset of Rn is called an affine k-chain. The simplexes in a chain need not be unique; they may occur with multiplicity. Rather than using standard set notation to denote an affine chain, it is instead the standard practice to use plus signs to separate each member in the set. If some of the simplexes have the opposite orientation, these are prefixed by a minus sign. If some of the simplexes occur in the set more than once, these are prefixed with an integer count. Thus, an affine chain takes the symbolic form of a sum with integer coefficients.

denoting the vertices, then the boundary

of σ is the chain

More generally, a simplex (and a chain) can be embedded into a manifold by means of smooth, differentiable map

. In this case, both the summation convention for denoting the set, and the boundary operation commute with the embedding. That is,

are the integers denoting orientation and multiplicity. For the boundary operator

to a topological space X is frequently referred to as a singular n-simplex.

Since classical algebraic geometry allows to talk about polynomial equations, but not inequalities, the algebraic standard n-simplex is commonly defined as the subset of affine n+1-dimensional space, where all coordinates sum up to 1 (thus leaving out the inequality part). The algebraic description of this set is

which equals the scheme-theoretic description

By using the same definitions as for the classical n-simplex, the n-simplices for different dimensions n assemble into one simplicial object, while the rings

assemble into one cosimplicial object

(in the category of schemes resp. rings, since the face and degeneracy maps are all polynomial).

The algebraic n-simplices are used in higher K-Theory and in the definition of higher Chow groups.

Template:Expand section Simplices are used in plotting quantities that sum to 1, such as proportions of subpopulations, as in a ternary plot.

In industrial statistics, simplices arise in problem formulation and in algorithmic solution. In the design of bread, the producer must combine yeast, flour, water, sugar, etc. In such mixtures, only the relative proportions of ingredients matters: For an optimal bread mixture, if the flour is doubled then the yeast should be doubled. Such mixture problem are often formulated with normalized constraints, so that the nonnegative components sum to one, in which case the feasible region forms a simplex. The quality of the bread mixtures can be estimated using response surface methodology, and then a local maximum can be computed using a nonlinear programming method, such as sequential quadratic programming.[10]

In operations research, linear programming problems can be solved by the simplex algorithm of George Dantzig.

In geometric design and computer graphics, many methods first perform simplicial triangulations of the domain and then fit interpolating polynomials to each simplex.[11]