In mathematics, the slope or gradient of a line is a number that describes both the direction and the steepness of the line.[1] Slope is often denoted by the letter m.[2]

Slope is calculated by finding the ratio of the "vertical change" to the "horizontal change" between (any) two distinct points on a line. Sometimes the ratio is expressed as a quotient ("rise over run"), giving the same number for every two distinct points on the same line. A line that is decreasing has a negative "rise". The line may be practical - as set by a road surveyor, or in a diagram that models a road or a roof either as a description or as a plan.

The rise of a road between two points is the difference between the altitude of the road at those two points, say y1 and y2, or in other words, the rise is (y2 − y1) = Δy. For relatively short distances - where the earth's curvature may be neglected, the run is the difference in distance from a fixed point measured along a level, horizontal line, or in other words, the run is (x2 − x1) = Δx. Here the slope of the road between the two points is simply described as the ratio of the altitude change to the horizontal distance between any two points on the line.

In mathematical language, the slope m of the line is

The concept of slope applies directly to grades or gradients in geography and civil engineering. Through trigonometry, the grade m of a road is related to its angle of incline θ by the tangent function

As a generalization of this practical description, the mathematics of differential calculus defines the slope of a curve at a point as the slope of the tangent line at that point. When the curve given by a series of points in a diagram or in a list of the coordinates of points, the slope may be calculated not at a point but between any two given points. When the curve is given as a continuous function, perhaps as an algebraic formula, then the differential calculus provides rules giving a formula for the slope of the curve at any point in the middle of the curve.

This generalization of the concept of slope allows very complex constructions to be planned and built that go well beyond static structures that are either horizontals or verticals, but can change in time, move in curves, and change depending on the rate of change of other factors. Thereby, the simple idea of slope becomes one of the main basis of the modern world in terms of both technology and the built environment. 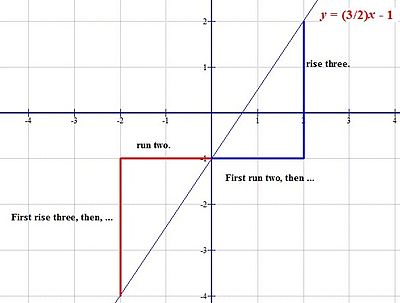 The slope of a line in the plane containing the x and y axes is generally represented by the letter m, and is defined as the change in the y coordinate divided by the corresponding change in the x coordinate, between two distinct points on the line. This is described by the following equation:

(The Greek letter delta, Δ, is commonly used in mathematics to mean "difference" or "change".)

Given two points (x1,y1) and (x2,y2), the change in x from one to the other is x2 − x1 (run), while the change in y is y2 − y1 (rise). Substituting both quantities into the above equation generates the formula:

.
Since the slope is positive, the direction of the line is increasing. Since |m|<1, the incline is not very steep (incline <45°).

Since the slope is negative, the direction of the line is decreasing. Since |m|>1, this decline is fairly steep (decline >45°).

then m is the slope. This form of a line's equation is called the slope-intercept form, because b can be interpreted as the y-intercept of the line, that is, the y-coordinate where the line intersects the y-axis.

(this is the inverse function of tangent; see trigonometry).

One can then write the line's equation, in point-slope form:

Slope of a road or railway

There are two common ways to describe the steepness of a road or railroad. One is by the angle between 0° and 90° (in degrees), and the other is by the slope in a percentage. See also steep grade railway and rack railway.

The formulae for converting a slope given as a percentage into an angle in degrees and vice versa are:

, (this is the inverse function of tangent; see trigonometry)

where angle is in degrees and the trigonometric functions operate in degrees. For example, a slope of 100% or 1000‰ is an angle of 45°.

At each point, the derivative is the slope of a line that is tangent to the curve at that point. Note: the derivative at the point A is positive where green and dash-dot, negative where red and dashed, and zero where black and solid.

If we let Δx and Δy be the distances (along the x and y axes, respectively) between two points on a curve, then the slope given by the above definition,

is the slope of a secant line to the curve. For a line, the secant between any two points is the line itself, but this is not the case for any other type of curve.

The concept of slope can be generalized to functions of more than one variable and is more often referred to as gradient.