An illustration of a solenoid

A solenoid (from the French solénoïde, derived in turn from the Greek solen "pipe, channel" + combining form of Greek eidos "form, shape"[1]) is a coil wound into a tightly packed helix. The term was invented by French physicist André-Marie Ampère to designate a helical coil.[2]

In physics, the term refers specifically to a long, thin loop of wire, often wrapped around a metallic core, which produces a uniform magnetic field in a volume of space (where some experiment might be carried out) when an electric current is passed through it. A solenoid is a type of electromagnet when the purpose is to generate a controlled magnetic field. If the purpose of the solenoid is instead to impede changes in the electric current, a solenoid can be more specifically classified as an inductor rather than an electromagnet. Not all electromagnets and inductors are solenoids; for example, the first electromagnet, invented in 1824, had a horseshoe rather than a cylindrical solenoid shape.

An infinite solenoid is a solenoid with infinite length but finite diameter. Continuous means that the solenoid is not formed by discrete coils but by a sheet of conductive material. 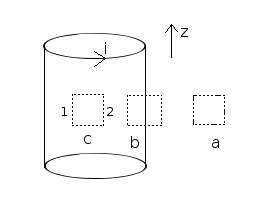 Figure 1: An infinite solenoid with 3 arbitrary Ampèrian loops labeled a, b and c. Integrating over path c demonstrates that the magnetic field inside the solenoid must be radially uniform.

In short: the magnetic field inside an infinitely long solenoid is homogeneous and its strength does not depend on the distance from the axis, nor on the solenoid cross-sectional area.

This is a derivation of the magnetic flux density around a solenoid that is long enough so that fringe effects can be ignored. In Figure 1, we immediately know that the flux density vector points in the positive z direction inside the solenoid, and in the negative z direction outside the solenoid. We see this by applying the right hand grip rule for the field around a wire. If we wrap our right hand around a wire with the thumb pointing in the direction of the current, the curl of the fingers shows how the field behaves. Since we are dealing with a long solenoid, all of the components of the magnetic field not pointing upwards cancel out by symmetry. Outside, a similar cancellation occurs, and the field is only pointing downwards.

Now consider the imaginary loop c that is located inside the solenoid. By Ampère's law, we know that the line integral of B (the magnetic flux density vector) around this loop is zero, since it encloses no electrical currents (it can be also assumed that the circuital electric field passing through the loop is constant under such conditions: a constant or constantly changing current through the solenoid). We have shown above that the field is pointing upwards inside the solenoid, so the horizontal portions of loop c do not contribute anything to the integral. Thus the integral of the up side 1 is equal to the integral of the down side 2. Since we can arbitrarily change the dimensions of the loop and get the same result, the only physical explanation is that the integrands are actually equal, that is, the magnetic field inside the solenoid is radially uniform. Note, though, that nothing prohibits it from varying longitudinally, which in fact it does.

Of course, if the solenoid is constructed as a wire spiral (as often done in practice), then it emanates an outside field the same way as a single wire, due to the current flowing overall down the length of the solenoid.

Now we can consider the imaginary loop b. Take the line integral of B (the magnetic flux density vector) around the loop of height l. The horizontal components vanish, and the field outside is practically zero, so Ampère's Law gives us

is the magnetic constant,

the number of turns, and

the current. From this we get

If the solenoid is immersed in a material with relative permeability μr, then the field is increased by that amount:

The inclusion of a ferromagnetic core, such as iron, increases the magnitude of the magnetic flux density in the solenoid and raises the effective permeability of the magnetic path. This is expressed by the formula

A finite solenoid is a solenoid with finite length. Continuous means that the solenoid is not formed by discrete coils but by a sheet of conductive material. We assume the current is uniformly distributed on the surface of the solenoid, with a surface current density K; in cylindrical coordinates:

The magnetic field can be found using the vector potential, which for a finite solenoid with radius a and length L in cylindrical coordinates

are complete elliptic integrals of the first, second, and third kind.

the magnetic flux density is obtained as

As shown above, the magnetic flux density

within the coil is practically constant and given by

where μ0 is the magnetic constant,

the number of turns,

the length of the coil. Ignoring end effects, the total magnetic flux through the coil is obtained by multiplying the flux density

by the cross-section area

Combining this with the definition of inductance

the inductance of a solenoid follows as

A table of inductance for short solenoids of various diameter to length ratios has been calculated by Dellinger, Whittmore, and Ould.[4]

This, and the inductance of more complicated shapes, can be derived from Maxwell's equations. For rigid air-core coils, inductance is a function of coil geometry and number of turns, and is independent of current. 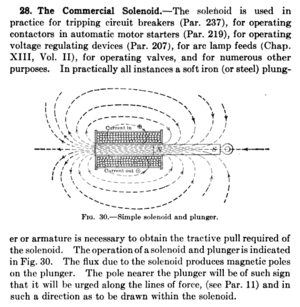 Electromechanical solenoids consist of an electromagnetically inductive coil, wound around a movable steel or iron slug (termed the armature). The coil is shaped such that the armature can be moved in and out of the center, altering the coil's inductance and thereby becoming an electromagnet. The armature is used to provide a mechanical force to some mechanism (such as controlling a pneumatic valve). Although typically weak over anything but very short distances, solenoids may be controlled directly by a controller circuit, and thus have very quick reaction times.

Proportional Solenoids - Incuded in this category of solenoids are the uniquely designed magnetic circuits that effect analog positioning of the solenoid plunger or armature as a function of coil current. These solenoids, whether axial or rotary, employ a flux carrying geometry that both produces a high starting force (torque), and has a section that quickly begins to saturate magnetically. The resulting force (torque) profile as the solenoid progresses thru its operational stroke is nearly flat or descends from a high to a lower value. The solenoid can be useful for positioning, stopping mid-stroke, or for low velocity actuation; especially in a closed loop control system. A uni-directional solenoid would actuate against an opposing force or a dual solenoid system would be self cycling. The proportional concept is more fully described in SAE publication 860759 (1986).

The rotary solenoid has a similar appearance to a linear solenoid, except that the core is mounted in the center of a large flat disk, with two or three inclined grooves cut into the underside of the disk. These grooves align with slots on the solenoid body, with ball bearings in the grooves.

When the solenoid is activated, the core is drawn into the coil, and the disk rotates on the ball bearings in the grooves as it moves towards the coil body. When power is removed, a spring on the disk rotates it back to its starting position, also pulling the core out of the coil.

The rotary solenoid was invented in 1944 by George H. Leland, of Dayton, Ohio, to provide a more reliable and shock/vibration tolerant release mechanism for air-dropped bombs. Previously used linear (axial) solenoids were prone to inadvertent releases. U.S. Patent number 2,496,880 describes the electromagnet and inclined raceways that are the basis of the invention. Leland's engineer, Earl W. Kerman, was instrumental in developing a compatible bomb release shackle that incorporated the rotary solenoid. Bomb shackles of this type are found in a B-29 aircraft fuselage on display at the National Museum of the USAF in Dayton, Ohio. Solenoids of this variety continue to be used in countless modern applications, and are still manufactured under Leland's original brand "Ledex", now owned by Johnson Electric.

A rotary voice coil is a rotational version of a solenoid. Typically the fixed magnet is on the outside, and the coil part moves in an arc controlled by the current flow through the coils. Rotary voice coils are widely employed in devices such as disk drives.{{ safesubst:#invoke:Unsubst||date=__DATE__ |$B= {{#invoke:Category handler|main}}{{#invoke:Category handler|main}}[citation needed] }}

Hydraulic solenoid valves are in general similar to pneumatic solenoid valves except that they control the flow of hydraulic fluid (oil), often at around 3000 psi (210 bar, 21 MPa, 21 MN/m²). Hydraulic machinery uses solenoids to control the flow of oil to rams or actuators. Solenoid-controlled valves are often used in irrigation systems, where a relatively weak solenoid opens and closes a small pilot valve, which in turn activates the main valve by applying fluid pressure to a piston or diaphragm that is mechanically coupled to the main valve. Solenoids are also in everyday household items such as washing machines to control the flow and amount of water into the drum.

Starter solenoids can also be built into the starter itself, often visible on the outside of the starter. If a starter solenoid receives insufficient power from the battery, it will fail to start the motor, and may produce a rapid 'clicking' or 'clacking' sound. This can be caused by a low or dead battery, by corroded or loose connections in the cable, or by a broken or damaged positive (red) cable from the battery. Any of these will result in some power to the solenoid, but not enough to hold the heavy contacts closed, so the starter motor itself never spins, and the engine doesn't start.