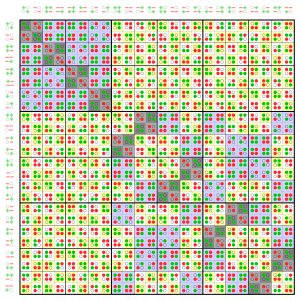 In mathematics, the special linear group of degree n over a field F is the set of n × n matrices with determinant 1, with the group operations of ordinary matrix multiplication and matrix inversion. This is the normal subgroup of the general linear group given by the kernel of the determinant

where we write F× for the multiplicative group of F (that is, F excluding 0).

These elements are "special" in that they fall on a subvariety of the general linear group – they satisfy a polynomial equation (since the determinant is polynomial in the entries).

of SL(n, F) consists of all n × n matrices over F with vanishing trace. The Lie bracket is given by the commutator.

Relations to other subgroups of GL(n,A)

Two related subgroups, which in some cases coincide with SL, and in other cases are accidentally conflated with SL, are the commutator subgroup of GL, and the group generated by transvections. These are both subgroups of SL (transvections have determinant 1, and det is a map to an abelian group, so [GL, GL] ≤ SL), but in general do not coincide with it.

For n = 2, transvections need not be commutators (of 2 × 2 matrices), as seen for example when A is F2, the field of two elements, then

where Alt(3) and Sym(3) denote the alternating resp. symmetric group on 3 letters.

If working over a ring where SL is generated by transvections (such as a field or Euclidean domain), one can give a presentation of SL using transvections with some relations. Transvections satisfy the Steinberg relations, but these are not sufficient: the resulting group is the Steinberg group, which is not the special linear group, but rather the universal central extension of the commutator subgroup of GL.

A sufficient set of relations for SL(n, Z) for n ≥ 3 is given by two of the Steinberg relations, plus a third relation Template:Harv. Let Tij := eij(1) be the elementary matrix with 1's on the diagonal and in the ij position, and 0's elsewhere (and i ≠ j). Then