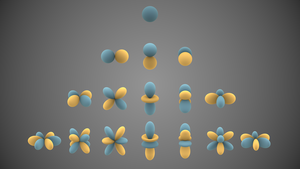 are a specific set of spherical harmonics that forms an orthogonal system, first introduced by Pierre Simon de Laplace in 1782.[1] Spherical harmonics are important in many theoretical and practical applications, particularly in the computation of atomic orbital electron configurations, representation of gravitational fields, geoids, and the magnetic fields of planetary bodies and stars, and characterization of the cosmic microwave background radiation. In 3D computer graphics, spherical harmonics play a special role in a wide variety of topics including indirect lighting (ambient occlusion, global illumination, precomputed radiance transfer, etc.) and modelling of 3D shapes.

Spherical harmonics were first investigated in connection with the Newtonian potential of Newton's law of universal gravitation in three dimensions. In 1782, Pierre-Simon de Laplace had, in his Mécanique Céleste, determined that the gravitational potential at a point x associated to a set of point masses mi located at points xi was given by

Each term in the above summation is an individual Newtonian potential for a point mass. Just prior to that time, Adrien-Marie Legendre had investigated the expansion of the Newtonian potential in powers of r = |x| and r1 = |x1|. He discovered that if r ≤ r1 then

where γ is the angle between the vectors x and x1. The functions Pi are the Legendre polynomials, and they are a special case of spherical harmonics. Subsequently, in his 1782 memoire, Laplace investigated these coefficients using spherical coordinates to represent the angle γ between x1 and x. (See Applications of Legendre polynomials in physics for a more detailed analysis.)

By examining Laplace's equation in spherical coordinates, Thomson and Tait recovered Laplace's spherical harmonics. The term "Laplace's coefficients" was employed by William Whewell to describe the particular system of solutions introduced along these lines, whereas others reserved this designation for the zonal spherical harmonics that had properly been introduced by Laplace and Legendre.

The 19th century development of Fourier series made possible the solution of a wide variety of physical problems in rectangular domains, such as the solution of the heat equation and wave equation. This could be achieved by expansion of functions in series of trigonometric functions. Whereas the trigonometric functions in a Fourier series represent the fundamental modes of vibration in a string, the spherical harmonics represent the fundamental modes of vibration of a sphere in much the same way. Many aspects of the theory of Fourier series could be generalized by taking expansions in spherical harmonics rather than trigonometric functions. This was a boon for problems possessing spherical symmetry, such as those of celestial mechanics originally studied by Laplace and Legendre.

and therefore they represent the different quantized configurations of atomic orbitals.

are rotated about the z axis by

with respect to the positive order ones.

Laplace's equation imposes that the divergence of the gradient of a scalar field f is zero. In spherical coordinates this is:[2]

Consider the problem of finding solutions of the form f(r,θ,φ) = R(r)Y(θ,φ). By separation of variables, two differential equations result by imposing Laplace's equation:

for some number m. A priori, m is a complex constant, but because Φ must be a periodic function whose period evenly divides 2π, m is necessarily an integer and Φ is a linear combination of the complex exponentials e±imφ. The solution function Y(θ,φ) is regular at the poles of the sphere, where θ=0,π. Imposing this regularity in the solution Θ of the second equation at the boundary points of the domain is a Sturm–Liouville problem that forces the parameter λ to be of the form λ = ℓ(ℓ+1) for some non-negative integer with ℓ ≥ |m|; this is also explained below in terms of the orbital angular momentum. Furthermore, a change of variables t = cosθ transforms this equation into the Legendre equation, whose solution is a multiple of the associated Legendre polynomial

Here the solution was assumed to have the special form Y(θ,φ) = Θ(θ)Φ(φ). For a given value of ℓ, there are 2ℓ+1 independent solutions of this form, one for each integer m with −ℓ ≤ m ≤ ℓ. These angular solutions are a product of trigonometric functions, here represented as a complex exponential, and associated Legendre polynomials:

is called a spherical harmonic function of degree ℓ and order m,

is an associated Legendre polynomial, N is a normalization constant, and θ and φ represent colatitude and longitude, respectively. In particular, the colatitude θ, or polar angle, ranges from 0 at the North Pole to π at the South Pole, assuming the value of π/2 at the Equator, and the longitude φ, or azimuth, may assume all values with 0 ≤ φ < 2π. For a fixed integer ℓ, every solution Y(θ,φ) of the eigenvalue problem

is a linear combination of

. In fact, for any such solution, rℓY(θ,φ) is the expression in spherical coordinates of a homogeneous polynomial that is harmonic (see below), and so counting dimensions shows that there are 2ℓ+1 linearly independent such polynomials.

The general solution to Laplace's equation in a ball centered at the origin is a linear combination of the spherical harmonic functions multiplied by the appropriate scale factor rℓ,

are constants and the factors

are known as solid harmonics. Such an expansion is valid in the ball

In quantum mechanics, Laplace's spherical harmonics are understood in terms of the orbital angular momentum[4]

is conventional in quantum mechanics; it is convenient to work in units in which

. The spherical harmonics are eigenfunctions of the square of the orbital angular momentum

Laplace's spherical harmonics are the joint eigenfunctions of the square of the orbital angular momentum and the generator of rotations about the azimuthal axis:

These operators commute, and are densely defined self-adjoint operators on the Hilbert space of functions f square-integrable with respect to the normal distribution on R3:

Furthermore, L2 is a positive operator.

If Y is a joint eigenfunction of L2 and Lz, then by definition

for some real numbers m and λ. Here m must in fact be an integer, for Y must be periodic in the coordinate φ with period a number that evenly divides 2π. Furthermore, since

Denote this joint eigenspace by Eλ,m, and define the raising and lowering operators by

Then L+ and L− commute with L2, and the Lie algebra generated by L+, L−, Lz is the special linear Lie algebra, with commutation relations

Several different normalizations are in common use for the Laplace spherical harmonic functions. Throughout the section, we use the standard convention that (see associated Legendre polynomials)

which is the natural normalization given by Rodrigues' formula.

In seismology, the Laplace spherical harmonics are generally defined as (this is the convention used in this article)

where δij is the Kronecker delta and dΩ = sinθ dφ dθ. This normalization is used in quantum mechanics because it ensures that probability is normalized, i.e.

The disciplines of geodesy and spectral analysis use

which have the normalization

where the superscript * denotes complex conjugation. Alternatively, this equation follows from the relation of the spherical harmonic functions with the Wigner D-matrix.

The Condon-Shortley phase convention is used here for consistency. The corresponding inverse equations are

The same sine and cosine factors can be also seen in the following subsection that deals with the cartesian representation.

, which can be seen to be consistent with the output of the equations above.

Use in quantum chemistry

As is known from the analytic solutions for the hydrogen atom, the eigenfunctions of the angular part of the wave function are spherical harmonics. However, the solutions of the non-relativistic Schrödinger equation without magnetic terms can be made real. This is why the real forms are extensively used in basis functions for quantum chemistry, as the programs don't then need to use complex algebra. Here, it is important to note that the real functions span the same space as the complex ones would.

For example, as can be seen from the table of spherical harmonics, the usual p functions (

) are complex and mix axis directions, but the real versions are essentially just x, y and z.

Using the expressions for

listed explicitly above we obtain:

It may be verified that this agrees with the function listed here and here.

Using the equations above to form the real spherical harmonics, it is seen that for

The expansion coefficients are the analogs of Fourier coefficients, and can be obtained by multiplying the above equation by the complex conjugate of a spherical harmonic, integrating over the solid angle Ω, and utilizing the above orthogonality relationships. This is justified rigorously by basic Hilbert space theory. For the case of orthonormalized harmonics, this gives:

If the coefficients decay in ℓ sufficiently rapidly — for instance, exponentially — then the series also converges uniformly to f.

The convergence of the series holds again in the same sense, but the benefit of the real expansion is that for real functions f the expansion coefficients become real.

The total power of a function f is defined in the signal processing literature as the integral of the function squared, divided by the area of its domain. Using the orthonormality properties of the real unit-power spherical harmonic functions, it is straightforward to verify that the total power of a function defined on the unit sphere is related to its spectral coefficients by a generalization of Parseval's theorem:

is defined as the angular power spectrum. In a similar manner, one can define the cross-power of two functions as

is defined as the cross-power spectrum. If the functions f and g have a zero mean (i.e., the spectral coefficients f00 and g00 are zero), then Sff(ℓ) and Sfg(ℓ) represent the contributions to the function's variance and covariance for degree ℓ, respectively. It is common that the (cross-)power spectrum is well approximated by a power law of the form

The general technique is to use the theory of Sobolev spaces. Statements relating the growth of the Sff(ℓ) to differentiability are then similar to analogous results on the growth of the coefficients of Fourier series. Specifically, if

then f is in the Sobolev space Hs(S2). In particular, the Sobolev embedding theorem implies that f is infinitely differentiable provided that

A mathematical result of considerable interest and use is called the addition theorem for spherical harmonics. This is a generalization of the trigonometric identity

where Pℓ is the Legendre polynomial of degree ℓ. This expression is valid for both real and complex harmonics.[9] The result can be proven analytically, using the properties of the Poisson kernel in the unit ball, or geometrically by applying a rotation to the vector y so that it points along the z-axis, and then directly calculating the right-hand side.[10]

In particular, when x = y, this gives Unsöld's theorem[11]

In the expansion (Template:EquationNote), the left-hand side Pℓ(x·y) is a constant multiple of the degree ℓ zonal spherical harmonic. From this perspective, one has the following generalization to higher dimensions. Let Yj be an arbitrary orthonormal basis of the space Hℓ of degree ℓ spherical harmonics on the n-sphere. Then

, the degree ℓ zonal harmonic corresponding to the unit vector x, decomposes as[12]

. For the spherical angles,

this corresponds to the replacement

. The associated Legendre polynomials gives (−1)ℓ+m and from the exponential function we have (−1)m, giving together for the spherical harmonics a parity of (−1)ℓ:

Visualization of the spherical harmonics 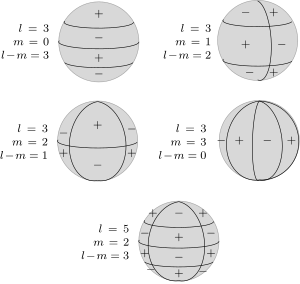 on the unit sphere and its nodal lines.

is equal to 0 along m great circles passing through the poles, and along ℓ−m circles of equal latitude. The function changes sign each time it crosses one of these lines.

can be visualized by considering their "nodal lines", that is, the set of points on the sphere where

are composed of circles: some are latitudes and others are longitudes. One can determine the number of nodal lines of each type by counting the number of zeros of

, and their nodal sets can be of a fairly general kind.[13]

Analytic expressions for the first few orthonormalized Laplace spherical harmonics that use the Condon-Shortley phase convention: