The set {1, i, j, k} forms a basis. The products of these elements are

and hence ijk = 1. It follows from the defining relations that the set {1, i, j, k, −1, −i, −j, −k} is a group under coquaternion multiplication; it is isomorphic to the dihedral group of a square.

This quadratic form is split into positive and negative parts, in contrast to the positive definite form on the algebra of quaternions.

When the modulus is non-zero, then q has a multiplicative inverse, namely q*/qq*. The set

represents q in the ring of matrices, i.e. the multiplication of split-quaternions behaves the same way as the matrix multiplication. For example, the determinant of this matrix is

The appearance of the minus sign, where there is a plus in H, distinguishes coquaternions from quaternions. The use of the split-quaternions of modulus one (qq* = 1) for hyperbolic motions of the Poincaré disk model of hyperbolic geometry is one of the great utilities of the algebra.

Besides the complex matrix representation, another linear representation associates coquaternions with 2 × 2 real matrices. This isomorphism can be made explicit as follows: Note first the product

which is in fact a ring isomorphism. Furthermore, computing squares of components and gathering terms shows that qq* = ad − bc, which is the determinant of the matrix. Consequently there is a group isomorphism between the unit quasi-sphere of coquaternions and SL(2, R) = {g ∈ M(2, R) : det g = 1}, and hence also with SU(1, 1): the latter can be seen in the complex representation above.

For instance, see Karzel and Kist[1] for the hyperbolic motion group representation with 2 × 2 real matrices.

In both of these linear representations the modulus is given by the determinant function. Since the determinant is a multiplicative mapping, the modulus of the product of two coquaternions is equal to the product of the two separate moduli. Thus coquaternions form a composition algebra. As an algebra over the field of real numbers, it is one of only seven such algebras. 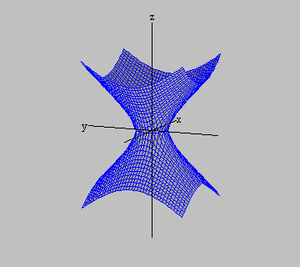 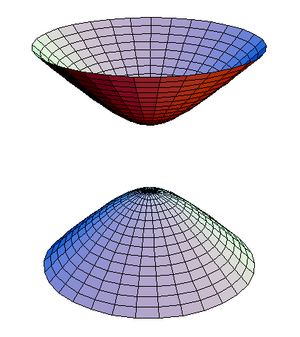 Elements of I are square roots of −1

The parameters z and r(θ) are the basis of a cylindrical coordinate system in the subspace. Parameter θ denotes azimuth. Next let a denote any real number and consider the coquaternions

These are the equilateral-hyperboloidal coordinates described by Alexander Macfarlane and Carmondy.[2]

Next, form three foundational sets in the vector-subspace of the ring:

Now it is easy to verify that

These set equalities mean that when p ∈ J then the plane

is a planar subring of P that is isomorphic to the ordinary complex plane C.

consists of the "unit circles" in the constituent planes of P: In Dp it is a unit hyperbola, in N the "unit circle" is a pair of parallel lines, while in Cv it is indeed a circle (though it appears elliptical due to v-stretching).These ellipse/circles found in each Cv are like the illusion of the Rubin vase which "presents the viewer with a mental choice of two interpretations, each of which is valid".

Definition. For non-zero coquaternions q and t we write q ⊥ t when the scalar part of the product q(t*) is zero.

Proof: (qu)(tu)* = (uu*)q(t*) follows from (tu)* = u*t*, which can be established using the anticommutativity property of vector cross products.

The quadratic form qq* is positive definite on the planes Cv and N. Consider the counter-sphere {q: qq* = −1}.

Since points on the counter-sphere must line on the conjugate of the unit hyperbola in some plane Dp ⊂ P, m can be written, for some p ∈ J

Let φ be the angle between the hyperbolas from r to p and m. This angle can be viewed, in the plane tangent to the counter-sphere at r, by projection:

as in the expression of angle of parallelism in the hyperbolic plane H2 . The parameter θ determining the meridian varies over the S1. Thus the counter-sphere appears as the manifold S1 × H2.

By using the foundations given above, one can show that the mapping

is an ordinary or hyperbolic rotation according as

The collection of these mappings bears some relation to the Lorentz group since it is also composed of ordinary and hyperbolic rotations. Among the peculiarities of this approach to relativistic kinematic is the anisotropic profile, say as compared to hyperbolic quaternions.

Reluctance to use coquaternions for kinematic models may stem from the (2, 2) signature when spacetime is presumed to have signature (1, 3) or (3, 1). Nevertheless, a transparently relativistic kinematics appears when a point of the counter-sphere is used to represent an inertial frame of reference. Indeed, if tt* = −1, then there is a p = i sinh(a) + r cosh(a) ∈ J such that t ∈ Dp, and an b ∈ R such that t = p exp(bp). Then if u = exp(bp), v = i cosh(a) + r sinh(a), and s = ir, the set {t, u, v, s} is a pan-orthogonal basis stemming from t, and the orthogonalities persist through applications of the ordinary or hyperbolic rotations.

The coquaternions were initially introduced (under that name)[3] in 1849 by James Cockle in the London–Edinburgh–Dublin Philosophical Magazine. The introductory papers by Cockle were recalled in the 1904 Bibliography[4] of the Quaternion Society. Alexander Macfarlane called the structure of coquaternion vectors an exspherical system when he was speaking at the International Congress of Mathematicians in Paris in 1900.[5]

The unit sphere was considered in 1910 by Hans Beck.[6] For example, the dihedral group appears on page 419. The coquaternion structure has also been mentioned briefly in the Annals of Mathematics.[7][8]