{{#invoke:Hatnote|hatnote}} {{ safesubst:#invoke:Unsubst||$N=Refimprove |date=__DATE__ |$B= {{#invoke:Message box|ambox}} }} Template:Even polygon stat table In geometry, a square is a regular quadrilateral, which means that it has four equal sides and four equal angles (90-degree angles, or right angles).[1] It can also be defined as a rectangle in which two adjacent sides have equal length. A square with vertices ABCD would be denoted

The square is the n=2 case of the families of n-hypercubes and n-orthoplexes. 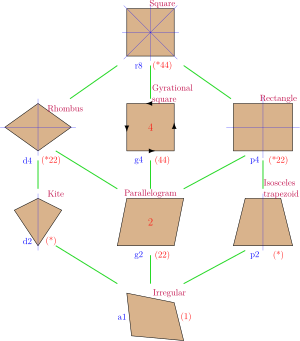 The square has dihedral point symmetry, Dih4, or orbifold (*44), with reflective subsymmetries: *22, *, and rotational subsymmetries: 44, 22, 1. These subsymmetries can be seen in 7 lower symmetry quadrilaterals, depending on whether the mirror lines are on the vertices or edges. The gyration square has the full geometry of the square, but has edge markings that define a rotating orientation of edges.[2]

A convex quadrilateral is a square if and only if it is any one of the following:[3][4] 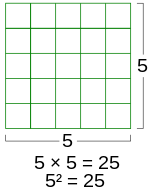 The area of a square is the product of the length of its sides.

The perimeter of a square whose four sides have length

and the area A is

In classical times, the second power was described in terms of the area of a square, as in the above formula. This led to the use of the term square to mean raising to the second power.

In terms of the circumradius R, the area of a square is

and in terms of the inradius r, its area is

A convex quadrilateral with successive sides a, b, c, d is a square if and only if [5]:Corollary 15 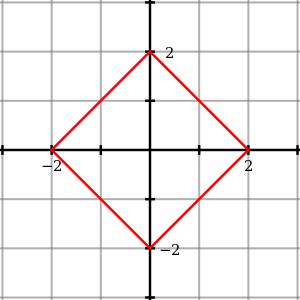 describes the boundary of a square of side 2, centered at the origin. This equation means "x2 or y2, whichever is larger, equals 1." The circumradius of this square (the radius of a circle drawn through the square's vertices) is half the square's diagonal, and equals

. Then the circumcircle has the equation

can also be used to describe the boundary of a square with center coordinates (a, b) and a horizontal or vertical radius of r.

Construction of a square using a compass and straightedge.

The animation at the right shows how to construct a square using a compass and straightedge.

A square is a special case of a rhombus (equal sides, opposite equal angles), a kite (two pairs of adjacent equal sides), a parallelogram (opposite sides parallel), a quadrilateral or tetragon (four-sided polygon), and a rectangle (opposite sides equal, right-angles) and therefore has all the properties of all these shapes, namely:[6]

The fraction of the triangle's area that is filled by the square is no more than 1/2.

Squaring the circle is the problem, proposed by ancient geometers, of constructing a square with the same area as a given circle by using only a finite number of steps with compass and straightedge.

In 1882, the task was proven to be impossible, as a consequence of the Lindemann–Weierstrass theorem which proves that pi (π) is a transcendental number, rather than an algebraic irrational number; that is, it is not the root of any polynomial with rational coefficients.

In spherical geometry, a square is a polygon whose edges are great circle arcs of equal distance, which meet at equal angles. Unlike the square of plane geometry, the angles of such a square are larger than a right angle. Larger spherical squares have larger angles. 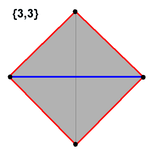 The K4 complete graph is often drawn as a square with all 6 edges connected. This graph also represents an orthographic projection of the 4 vertices and 6 edges of the regular 3-simplex (tetrahedron).