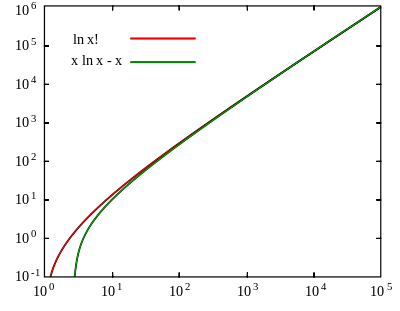 The formula as typically used in applications is

Being an asymptotic formula, Stirling's approximation has the property that

rather than asymptotics are required: one has, for all

The formula, together with precise estimates of its error, can be derived as follows. Instead of approximating n!, one considers its natural logarithm as this is a slowly varying function:

The right-hand side of this equation minus

is the approximation by the trapezoid rule of the integral

and the error in this approximation is given by the Euler–Maclaurin formula:

where Bk is a Bernoulli number and Rm,n is the remainder term in the Euler–Maclaurin formula. Take limits to find that

Denote this limit by y. Because the remainder Rm,n in the Euler–Maclaurin formula satisfies

where we use Big-O notation, combining the equations above yields the approximation formula in its logarithmic form:

Taking the exponential of both sides, and choosing any positive integer m, we get a formula involving an unknown quantity ey. For m = 1, the formula is

The quantity ey can be found by taking the limit on both sides as n tends to infinity and using Wallis' product, which shows that

. Therefore, we get Stirling's formula:

The formula may also be obtained by repeated integration by parts, and the leading term can be found through Laplace's method. Stirling's formula, without the factor

that is often irrelevant in applications, can be quickly obtained by approximating the sum

An alternative formula for

using the Gamma function is

(as can be seen by repeated integration by parts). Rewriting and changing variables

Applying Laplace's method we have:

which recovers the Stirling's formula,

Speed of convergence and error estimates 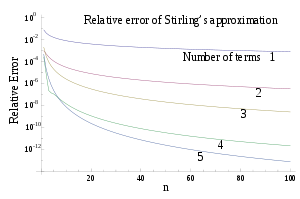 The relative error in a truncated Stirling series vs. n, for 1 to 5 terms

Stirling's formula is in fact the first approximation to the following series (now called the Stirling series):

An explicit formula for the coefficients in this series was given by G. Nemes.[1] The first graph in this section shows the relative error vs. n, for 1 through all 5 terms listed above.

The relative error in a truncated Stirling series vs. the number of terms used

As n → ∞, the error in the truncated series is asymptotically equal to the first omitted term. This is an example of an asymptotic expansion. It is not a convergent series; for any particular value of n there are only so many terms of the series that improve accuracy, after which point accuracy actually gets worse. This is shown in the next graph, which shows the relative error versus the number of terms in the series, for larger numbers of terms. More precisely, let S(n, t) be the Stirling series to t terms evaluated at n. The graphs show

which, when small, is essentially the relative error.

Writing Stirling's series in the form:

it is known that the error in truncating the series is always of the same sign and at most the same magnitude as the first omitted term.

Stirling's formula for the gamma function

For all positive integers,

where Γ denotes the gamma function.

However, the Pi function, unlike the factorial, is more broadly defined for all complex numbers other than non-positive integers; nevertheless, Stirling's formula may still be applied. If Re(z) > 0 then

where Bn is the n-th Bernoulli number (note that the infinite sum is not convergent, so this formula is just an asymptotic expansion). The formula is valid for z large enough in absolute value when |arg(z)| < π−ε, where ε is positive, with an error term of

when the first m terms are used. The corresponding approximation may now be written:

A further application of this asymptotic expansion is for complex argument z with constant Re(z). See for example the Stirling formula applied in Im(z) = t of the Riemann-Siegel theta function on the straight line 1/4 + it.

A convergent version of Stirling's formula

Thomas Bayes showed, in a letter to John Canton published by the Royal Society in 1763, that Stirling's formula did not give a convergent series.[2]

One way to do this is by means of a convergent series of inverted rising exponentials. If

where s(n, k) denotes the Stirling numbers of the first kind. From this we obtain a version of Stirling's series

can be obtained by rearranging Stirling's extended formula and observing a coincidence between the resultant power series and the Taylor series expansion of the hyperbolic sine function. This approximation is good to more than 8 decimal digits for z with a real part greater than 8. Robert H. Windschitl suggested it in 2002 for computing the Gamma function with fair accuracy on calculators with limited program or register memory.[3]

Gergő Nemes proposed in 2007 an approximation which gives the same number of exact digits as the Windschitl approximation but is much simpler:[4]

An alternative approximation for ln n! was also given by Srinivasa Ramanujan (Ramanujan 1988)

De Moivre gave an expression for the constant in terms of its natural logarithm. Stirling's contribution consisted of showing that the constant is

. The more precise versions are due to Jacques Binet.