For a matrix whose elements are stochastic, see Random matrix

In mathematics, a stochastic matrix (also termed probability matrix, transition matrix,[1] substitution matrix, or Markov matrix) is a matrix used to describe the transitions of a Markov chain. Each of its entries is a nonnegative real number representing a probability. It has found use in probability theory, statistics and linear algebra, as well as computer science and population genetics. There are several different definitions and types of stochastic matrices:

A right stochastic matrix is a real square matrix, with each row summing to 1.

A left stochastic matrix is a real square matrix, with each column summing to 1.

A doubly stochastic matrix is a square matrix of nonnegative real numbers with each row and column summing to 1.

over a finite state space S.

If the probability of moving from

in one time step is

, the stochastic matrix P is given by using

Since the probability of transitioning from state

to some state must be 1, this matrix is a right stochastic matrix, so that

The probability of transitioning from

in two steps is then given by the

element of the square of

in k steps is given by

An initial distribution is given as a row vector.

is defined as a vector that does not change under application of the transition matrix; that is, it is defined as a left eigenvector of the probability matrix, associated with eigenvalue 1:

The Perron–Frobenius theorem ensures that every stochastic matrix has such a vector, and that the largest absolute value of an eigenvalue is always 1. In general, there may be several such vectors. However, for a matrix with strictly positive entries, this vector is unique and can be computed by observing that for any

we have the following limit,

element of the row vector

. This implies that the long-term probability of being in a state

is independent of the initial state

. That either of these two computations give one and the same stationary vector is a form of an ergodic theorem, which is generally true in a wide variety of dissipative dynamical systems: the system evolves, over time, to a stationary state. Intuitively, a stochastic matrix represents a Markov chain with no sink states, this implies that the application of the stochastic matrix to a probability distribution would redistribute the probability mass of the original distribution while preserving its total mass. If this process is applied repeatedly the distribution converges to a stationary distribution for the Markov chain.

Example: the cat and mouse

The Markov chain that represents this game contains the following five states specified by the combination of positions (cat,mouse):

We use a stochastic matrix to represent the transition probabilities of this system (rows and columns in this matrix are indexed by the possible states listed above),

No matter what the initial state the cat will eventually catch the mouse and a stationary state π = (0,0,0,0,1) is approached as a limit. To compute the long term average or expected value of a stochastic variable Y, for each state Sj and time tk there is a contribution of Yj,k·P(S=Sj,t=tk). Survival can be treated as a binary variable with Y=1 for a surviving state and Y=0 for the terminated state. The states with Y=0 do not contribute to the long term average. 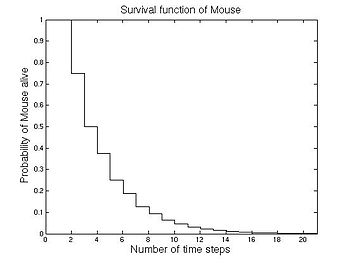 The survival function of the mouse. The mouse will survive at least the first time step.

As State 5 is an absorbing state, the distribution of time to absorption is discrete phase-type distributed. Suppose the system starts in state 2, represented by the vector

. The states where the mouse has perished don't contribute to the survival average so state five can be ignored. The initial state and transition matrix can be reduced to,

is the identity matrix, and

represents a column matrix of all ones that acts as a sum over states.

Since each state is occupied for one step of time the expected time of the mouse's survival is just the sum of the probability of occupation over all surviving states and steps in time,

Higher order moments are given by