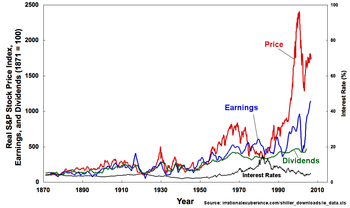 Stock market fluctuations have been modeled by stochastic processes.

In probability theory, a stochastic (Template:IPAc-en) process, or sometimes random process (widely used) is a collection of random variables, representing the evolution of some system of random values over time. This is the probabilistic counterpart to a deterministic process (or deterministic system). Instead of describing a process which can only evolve in one way (as in the case, for example, of solutions of an ordinary differential equation), in a stochastic or random process there is some indeterminacy: even if the initial condition (or starting point) is known, there are several (often infinitely many) directions in which the process may evolve.

In the simple case of discrete time, as opposed to continuous time, a stochastic process involves a sequence of random variables and the time series associated with these random variables (for example, see Markov chain, also known as discrete-time Markov chain). One approach to stochastic processes treats them as functions of one or several deterministic arguments (inputs, in most cases regarded as time) whose values (outputs) are random variables: non-deterministic (single) quantities which have certain probability distributions. Random variables corresponding to various times (or points, in the case of random fields) may be completely different. The main requirement is that these different random quantities all have the same type. Type refers to the codomain of the function. Although the random values of a stochastic process at different times may be independent random variables, in most commonly considered situations they exhibit complicated statistical correlations.

Familiar examples of processes modeled as stochastic time series include stock market and exchange rate fluctuations, signals such as speech, audio and video, medical data such as a patient's EKG, EEG, blood pressure or temperature, and random movement such as Brownian motion or random walks. Examples of random fields include static images, random terrain (landscapes), wind waves or composition variations of a heterogeneous material.

A generalization, the random field, is defined by letting the variables' parameters be members of a topological space instead of limited to real values representing time.

Given a probability space

and a measurable space

, an S-valued stochastic process is a collection of S-valued random variables on

, indexed by a totally ordered set T ("time"). That is, a stochastic process X is a collection

is an S-valued random variable on

. The space S is then called the state space of the process.

Let X be an S-valued stochastic process. For every finite sequence

is a random variable taking values in

of this random variable is a probability measure on

. This is called a finite-dimensional distribution of X.

Under suitable topological restrictions, a suitably "consistent" collection of finite-dimensional distributions can be used to define a stochastic process (see Kolmogorov extension in the "Construction" section).

Stochastic processes were first studied rigorously in the late 19th century to aid in understanding financial markets and Brownian motion. The first person to describe the mathematics behind Brownian motion was Thorvald N. Thiele in a paper on the method of least squares published in 1880. This was followed independently by Louis Bachelier in 1900 in his PhD thesis "The theory of speculation", in which he presented a stochastic analysis of the stock and option markets. Albert Einstein (in one of his 1905 papers) and Marian Smoluchowski (1906) brought the solution of the problem to the attention of physicists, and presented it as a way to indirectly confirm the existence of atoms and molecules. Their equations describing Brownian motion were subsequently verified by the experimental work of Jean Baptiste Perrin in 1908.

An excerpt from Einstein's paper describes the fundamentals of a stochastic model:

We introduce a time interval

, the motions executed by the particle can be thought of as events which are independent of each other".

In the ordinary axiomatization of probability theory by means of measure theory, the problem is to construct a sigma-algebra of measurable subsets of the space of all functions, and then put a finite measure on it. For this purpose one traditionally uses a method called Kolmogorov extension.[1]

There is at least one alternative axiomatization of probability theory by means of expectations on C-star algebras of random variables. In this case the method goes by the name of Gelfand–Naimark–Segal construction.

The Kolmogorov extension proceeds along the following lines: assuming that a probability measure on the space of all functions

exists, then it can be used to specify the joint probability distribution of finite-dimensional random variables

. Note that the obvious compatibility condition, namely, that this marginal probability distribution be in the same class as the one derived from the full-blown stochastic process, is not a requirement. Such a condition only holds, for example, if the stochastic process is a Wiener process (in which case the marginals are all gaussian distributions of the exponential class) but not in general for all stochastic processes. When this condition is expressed in terms of probability densities, the result is called the Chapman–Kolmogorov equation.

The Kolmogorov extension theorem guarantees the existence of a stochastic process with a given family of finite-dimensional probability distributions satisfying the Chapman–Kolmogorov compatibility condition.

Separability, or what the Kolmogorov extension does not provide

Recall that in the Kolmogorov axiomatization, measurable sets are the sets which have a probability or, in other words, the sets corresponding to yes/no questions that have a probabilistic answer.

are restricted to lie in measurable subsets of

. In other words, if a yes/no question about f can be answered by looking at the values of at most finitely many coordinates, then it has a probabilistic answer.

In measure theory, if we have a countably infinite collection of measurable sets, then the union and intersection of all of them is a measurable set. For our purposes, this means that yes/no questions that depend on countably many coordinates have a probabilistic answer.

The good news is that the Kolmogorov extension makes it possible to construct stochastic processes with fairly arbitrary finite-dimensional distributions. Also, every question that one could ask about a sequence has a probabilistic answer when asked of a random sequence. The bad news is that certain questions about functions on a continuous domain don't have a probabilistic answer. One might hope that the questions that depend on uncountably many values of a function be of little interest, but the really bad news is that virtually all concepts of calculus are of this sort. For example:

all require knowledge of uncountably many values of the function.

One solution to this problem is to require that the stochastic process be separable. In other words, that there be some countable set of coordinates

The Kolmogorov continuity theorem guarantees that processes that satisfy certain constraints on the moments of their increments have continuous modifications and are therefore separable.

Given a probability space

, a filtration is a weakly increasing collection of sigma-algebras on

, indexed by some totally ordered set

, and bounded above by

on the same time set

is said to be adapted to the filtration if, for every t

Given a stochastic process

, the natural filtration for (or induced by) this process is the filtration where

is generated by all values of

A stochastic process is always adapted to its natural filtration.

Stochastic processes can be classified according to the cardinality of its index set (usually interpreted as time) and state space.

, the set of natural numbers, then we have models, which lead to Markov chains. For example:

of a sequence of transmitted bits, then

can be modelled as a Markov chain with two states. This leads to the error correcting viterbi algorithm in data transmission.

means the combined genotype of a breeding couple in the

th generation in an inbreeding model, it can be shown that the proportion of heterozygous individuals in the population approaches zero as

The paradigm of continuous stochastic process is that of the Wiener process. In its original form the problem was concerned with a particle floating on a liquid surface, receiving "kicks" from the molecules of the liquid. The particle is then viewed as being subject to a random force which, since the molecules are very small and very close together, is treated as being continuous and since the particle is constrained to the surface of the liquid by surface tension, is at each point in time a vector parallel to the surface. Thus, the random force is described by a two-component stochastic process; two real-valued random variables are associated to each point in the index set, time, (note that since the liquid is viewed as being homogeneous the force is independent of the spatial coordinates) with the domain of the two random variables being R, giving the x and y components of the force. A treatment of Brownian motion generally also includes the effect of viscosity, resulting in an equation of motion known as the Langevin equation.[4]

Similarly, if the index space I is a finite or infinite interval, we can ask about the sample paths {Xt(ω)}t ∈ I