The same definitions apply more generally when G is an arbitrary semigroup, but this article will only deal with subgroups of groups. The group G is sometimes denoted by the ordered pair (G, ∗), usually to emphasize the operation ∗ when G carries multiple algebraic or other structures.

This article will write ab for a ∗ b, as is usual. 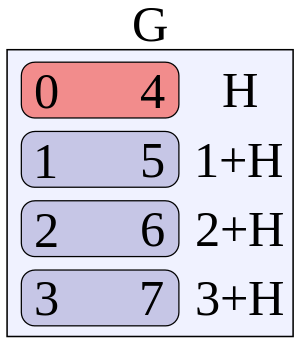 G is the group

, the integers mod 8 under addition. The subgroup H contains only 0 and 4, and is isomorphic to

. There are four left cosets of H: H itself, 1+H, 2+H, and 3+H (written using additive notation since this is an additive group). Together they partition the entire group G into equal-size, non-overlapping sets. The index [G : H] is 4.

Given a subgroup H and some a in G, we define the left coset aH = {ah : h in H}. Because a is invertible, the map φ : H → aH given by φ(h) = ah is a bijection. Furthermore, every element of G is contained in precisely one left coset of H; the left cosets are the equivalence classes corresponding to the equivalence relation a1 ~ a2 if and only if a1−1a2 is in H. The number of left cosets of H is called the index of H in G and is denoted by [G : H].

Lagrange's theorem states that for a finite group G and a subgroup H,

Right cosets are defined analogously: Ha = {ha : h in H}. They are also the equivalence classes for a suitable equivalence relation and their number is equal to [G : H].

If aH = Ha for every a in G, then H is said to be a normal subgroup. Every subgroup of index 2 is normal: the left cosets, and also the right cosets, are simply the subgroup and its complement. More generally, if p is the lowest prime dividing the order of a finite group G, then any subgroup of index p (if such exists) is normal.

Let G be the cyclic group Z8 whose elements are

and whose group operation is addition modulo eight. Its Cayley table is

This group has two nontrivial subgroups: J={0,4} and H={0,2,4,6}, where J is also a subgroup of H. The Cayley table for H is the top-left quadrant of the Cayley table for G. The group G is cyclic, and so are its subgroups. In general, subgroups of cyclic groups are also cyclic.

Example: Subgroups of S4 (the symmetric group on 4 elements)

Every group has as many small subgroups as neutral elements on the main diagonal:

The trivial group and two-element groups Z2. These small subgroups are not counted in the following list. 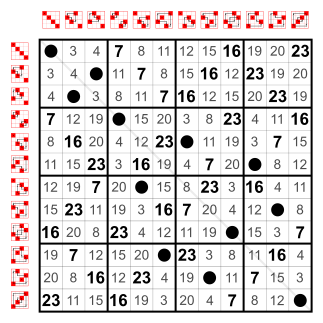 The alternating group A4 showing only the even permutations