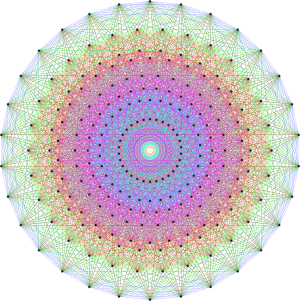 The root system of the exceptional Lie group E8. Lie groups have many symmetries.

Symmetry occurs not only in geometry, but also in other branches of mathematics. Symmetry is a type of invariance: the property that something does not change under a set of transformations.

In general, every kind of structure in mathematics will have its own kind of symmetry, many of which are listed in this article.

{{#invoke:main|main}} The types of symmetry considered in basic geometry (like reflection and rotation symmetry) are described more fully in the main article on symmetry.

Even and odd functions 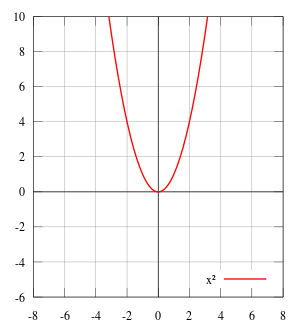 Let f(x) be a real-valued function of a real variable. Then f is even if the following equation holds for all x and -x in the domain of f:

Geometrically speaking, the graph face of an even function is symmetric with respect to the y-axis, meaning that its graph remains unchanged after reflection about the y-axis. 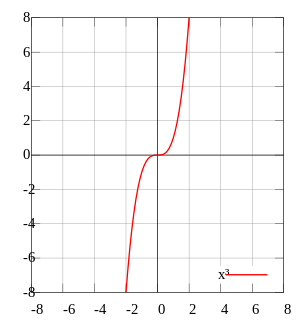 Again, let f(x) be a real-valued function of a real variable. Then f is odd if the following equation holds for all x and -x in the domain of f:

Geometrically, the graph of an odd function has rotational symmetry with respect to the origin, meaning that its graph remains unchanged after rotation of 180 degrees about the origin.

The integral of an odd function from −A to +A is zero (where A is finite, and the function has no vertical asymptotes between −A and A).

The integral of an even function from −A to +A is twice the integral from 0 to +A (where A is finite, and the function has no vertical asymptotes between −A and A. This also holds true when A is infinite, but only if the integral converges).

In linear algebra, a symmetric matrix is a square matrix that is equal to its transpose. Formally, matrix A is symmetric if

and, because the definition of matrix equality demands equality of their dimensions, only square matrices can be symmetric.

The entries of a symmetric matrix are symmetric with respect to the main diagonal. So if the entries are written as A = (aij), then aij = aji, for all indices i and j.

The following 3×3 matrix is symmetric:

Every square diagonal matrix is symmetric, since all off-diagonal entries are zero. Similarly, each diagonal element of a skew-symmetric matrix must be zero, since each is its own negative.

In two variables X1, X2 one has symmetric polynomials like

and in three variables X1, X2, X3 one has for instance

{{#invoke:main|main}} In mathematics, a symmetric tensor is tensor that is invariant under a permutation of its vector arguments:

for every permutation σ of the symbols {1,2,...,r}. Alternatively, an rth order symmetric tensor represented in coordinates as a quantity with r indices satisfies

and the other in state

and antisymmetry under exchange means that A(x,y) = −A(y,x). This implies that A(x,x) = 0, which is Pauli exclusion. It is true in any basis, since unitary changes of basis keep antisymmetric matrices antisymmetric, although strictly speaking, the quantity A(x,y) is not a matrix but an antisymmetric rank-two tensor.

Conversely, if the diagonal quantities A(x,x) are zero in every basis, then the wavefunction component:

is necessarily antisymmetric. To prove it, consider the matrix element:

This is zero, because the two particles have zero probability to both be in the superposition state

. But this is equal to

The first and last terms on the right hand side are diagonal elements and are zero, and the whole sum is equal to zero. So the wavefunction matrix elements obey:

We call a relation symmetric if every time the relation stands from A to B, it stands too from B to A. Note that symmetry is not the exact opposite of antisymmetry.

Isometries of a space

For ordinary differential equations, knowledge of an appropriate set of Lie symmetries allows one to explicitly calculate a set of first integrals, yielding a complete solution without integration.

In the case of a finite number of possible outcomes, symmetry with respect to permutations (relabelings) implies a discrete uniform distribution.

In the case of a real interval of possible outcomes, symmetry with respect to interchanging sub-intervals of equal length corresponds to a continuous uniform distribution.

There is one type of isometry in one dimension that may leave the probability distribution unchanged, that is reflection in a point, for example zero.

A possible symmetry for randomness with positive outcomes is that the former applies for the logarithm, i.e., the outcome and its reciprocal have the same distribution. However this symmetry does not single out any particular distribution uniquely.

For a "random point" in a plane or in space, one can choose an origin, and consider a probability distribution with circular or spherical symmetry, respectively.