Play (help·info). The perfect fifth above D (A+) is a syntonic comma higher than the just major sixth (ATemplate:Music).[1]

In music theory, the syntonic comma, also known as the chromatic diesis, the comma of Didymus, the Ptolemaic comma, or the diatonic comma[2] is a small comma type interval between two musical notes, equal to the frequency ratio 81:80, or around 21.51 cents. Two notes that differ by this interval would sound different from each other even to untrained ears,[3] but would be close enough that they would be more likely interpreted as out-of-tune versions of the same note than as different notes. The comma is referred to as a "comma of Didymus" because it is the amount by which Didymus corrected the Pythagorean major third (81:64 or 407.82 cents)[4] to a just major third (386.31 cents or 5:4).

The syntonic comma can be defined as:

On a piano keyboard (typically tuned with 12-tone equal temperament) a stack of four fifths (700 * 4 = 2800 cents) is exactly equal to two octaves (1200 * 2 = 2400 cents) plus a major third (400 cents). In other words, starting from a C, both combinations of intervals will end up at E. Using justly tuned octaves (2:1), fifths (3:2), and thirds (5:4), however, yields two slightly different notes. The ratio between their frequencies, as explained above, is a syntonic comma (81:80). Pythagorean tuning uses justly tuned fifths (3:2) as well, but uses the relatively complex ratio of 81:64 for major thirds. Quarter-comma meantone uses justly tuned major thirds (5:4), but flattens each of the fifths by a quarter of a syntonic comma, relative to their just size (3:2). Other systems use different compromises. This is one of the reasons why 12-tone equal temperament is currently the preferred system for tuning most musical instruments.

Another frequently encountered comma is the Pythagorean comma.

Syntonic comma in the history of music

The syntonic comma has a crucial role in the history of music. It is the amount by which some of the notes produced in Pythagorean tuning were flattened or sharpened to produce just minor and major thirds. In Pythagorean tuning, the only highly consonant intervals were the perfect fifth and its inversion, the perfect fourth. The Pythagorean major third (81:64) and minor third (32:27) were dissonant, and this prevented musicians from using triads and chords, forcing them for centuries to write music with relatively simple texture. In late Middle Ages, musicians realized that by slightly tempering the pitch of some notes, the Pythagorean thirds could be made consonant. For instance, if you decrease by a syntonic comma (81:80) the frequency of E, C-E (a major third), and E-G (a minor third) become just. Namely, C-E is flattened to a justly intonated ratio of

The drawback is that the fifths A-E and E-B, by flattening E, become almost as dissonant as the Pythagorean wolf fifth. But the fifth C-G stays consonant, since only E has been flattened (C-E * E-G = 5/4 * 6/5 = 3/2), and can be used together with C-E to produce a C-major triad (C-E-G). These experiments eventually brought to the creation of a new tuning system, known as quarter-comma meantone, in which the number of major thirds was maximized, and most minor thirds were tuned to a ratio which was very close to the just 6:5. This result was obtained by flattening each fifth by a quarter of a syntonic comma, an amount which was considered negligible, and permitted the full development of music with complex texture, such as polyphonic music, or melody with instrumental accompaniment. Since then, other tuning systems were developed, and the syntonic comma was used as a reference value to temper the perfect fifths in an entire family of them. Namely, in the family belonging to the syntonic temperament continuum, including meantone temperaments. 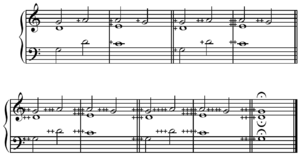 Giovanni Benedetti's 1563 example of a comma "pump" or drift by a comma during a progression.[5]

Play (help·info) Common tones between chords are the same pitch, with the other notes tuned in pure intervals to the common tones.

The syntonic comma arises in "comma pump" (comma drift) sequences such as C G D A E C, when each interval from one note to the next is played with just intonation tuning. If you use the frequency ratio 3/2 for the perfect fifths (C-G and D-A), 3/4 for the descending perfect fourths (G-D and A-E), and 4/5 for the descending major third (E-C), then the sequence of intervals from one note to the next in that sequence goes 3/2, 3/4, 3/2, 3/4, 4/5. These multiply together to give

which is the syntonic comma (you multiply ratios when you stack musical intervals like that).

So in that sequence, the second C is sharper than the first C by a syntonic comma

Play (help·info). That sequence, or any transposition of it, is known as the comma pump. If a line of music follows that sequence, and if each of the intervals between adjacent notes is justly tuned, then every time you go around the sequence the pitch of the piece rises by a syntonic comma (about a fifth of a semitone).

Study of the comma pump dates back at least to the sixteenth century when the Italian scientist Giovanni Benedetti composed a piece of music to illustrate syntonic comma drift.[5]

or, by grouping together similar intervals,

This means that, if all intervals are justly tuned, a syntonic comma can be obtained with a stack of four perfect fifths plus one minor sixth, followed by three descending octaves (in other words, four P5 plus one m6 minus three P8).

In Helmholtz-Ellis notation, a syntonic comma is indicated with up and down arrows added to the traditional accidentals. Thus a Pythagorean scale is C D E F G A B, while the 5-limit Ptolemaic scale is C D E