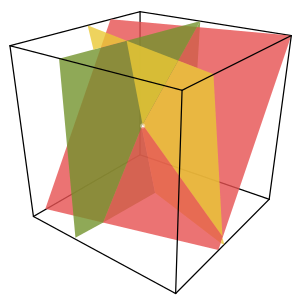 A linear system in three variables determines a collection of planes. The intersection point is the solution.

since it makes all three equations valid. The word "system" indicates that the equations are to be considered collectively, rather than individually.

In mathematics, the theory of linear systems is the basis and a fundamental part of linear algebra, a subject which is used in most parts of modern mathematics. Computational algorithms for finding the solutions are an important part of numerical linear algebra, and play a prominent role in engineering, physics, chemistry, computer science, and economics. A system of non-linear equations can often be approximated by a linear system (see linearization), a helpful technique when making a mathematical model or computer simulation of a relatively complex system.

Very often, the coefficients of the equations are real or complex numbers and the solutions are searched in the same set of numbers, but the theory and the algorithms apply for coefficients and solutions in any field. For solutions in an integral domain like the ring of the integers, or in other algebraic structures, other theories have been developed, see Linear equation over a ring. Integer linear programming is a collection of methods for finding the "best" integer solution (when there are many). Gröbner basis theory provides algorithms when coefficients and unknowns are polynomials. Also tropical geometry is an example of linear algebra in a more exotic structure.

One method for solving such a system is as follows. First, solve the top equation for

Now substitute this expression for x into the bottom equation:

This results in a single equation involving only the variable

, and substituting this back into the equation for

. This method generalizes to systems with additional variables (see "elimination of variables" below, or the article on elementary algebra.)

are the coefficients of the system, and

Often the coefficients and unknowns are real or complex numbers, but integers and rational numbers are also seen, as are polynomials and elements of an abstract algebraic structure.

One extremely helpful view is that each unknown is a weight for a column vector in a linear combination.

This allows all the language and theory of vector spaces (or more generally, modules) to be brought to bear. For example, the collection of all possible linear combinations of the vectors on the left-hand side is called their span, and the equations have a solution just when the right-hand vector is within that span. If every vector within that span has exactly one expression as a linear combination of the given left-hand vectors, then any solution is unique. In any event, the span has a basis of linearly independent vectors that do guarantee exactly one expression; and the number of vectors in that basis (its dimension) cannot be larger than m or n, but it can be smaller. This is important because if we have m independent vectors a solution is guaranteed regardless of the right-hand side, and otherwise not guaranteed.

The number of vectors in a basis for the span is now expressed as the rank of the matrix. 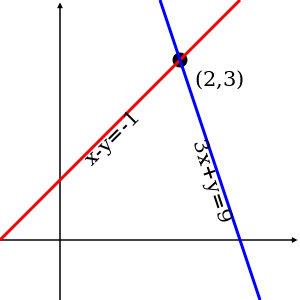 A solution of a linear system is an assignment of values to the variables x1, x2, ..., xn such that each of the equations is satisfied. The set of all possible solutions is called the solution set.

A linear system may behave in any one of three possible ways:

For a system involving two variables (x and y), each linear equation determines a line on the xy-plane. Because a solution to a linear system must satisfy all of the equations, the solution set is the intersection of these lines, and is hence either a line, a single point, or the empty set.

For n variables, each linear equation determines a hyperplane in n-dimensional space. The solution set is the intersection of these hyperplanes, which may be a flat of any dimension. 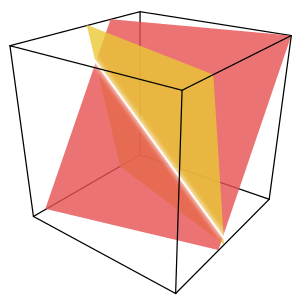 The solution set for two equations in three variables is usually a line.

In general, the behavior of a linear system is determined by the relationship between the number of equations and the number of unknowns:

The following pictures illustrate this trichotomy in the case of two variables:

The first system has infinitely many solutions, namely all of the points on the blue line. The second system has a single unique solution, namely the intersection of the two lines. The third system has no solutions, since the three lines share no common point. 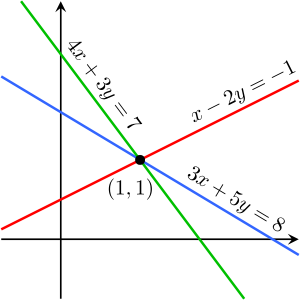 For example, the equations

are not independent — they are the same equation when scaled by a factor of two, and they would produce identical graphs. This is an example of equivalence in a system of linear equations.

For a more complicated example, the equations

For example, the equations

are inconsistent. In fact, by subtracting the first equation from the second one and multiplying both sides of the result by 1/6, we get 0 = 1. The graphs of these equations on the xy-plane are a pair of parallel lines.

It is possible for three linear equations to be inconsistent, even though any two of them are consistent together. For example, the equations

are inconsistent. Adding the first two equations together gives 3x + 2y = 2, which can be subtracted from the third equation to yield 0 = 1. Note that any two of these equations have a common solution. The same phenomenon can occur for any number of equations.

There are several algorithms for solving a system of linear equations.

. When an order on the unknowns has been fixed, for example the alphabetical order the solution may be described as a vector of values, like

for the previous example.

It can be difficult to describe a set with infinite solutions. Typically, some of the variables are designated as free (or independent, or as parameters), meaning that they are allowed to take any value, while the remaining variables are dependent on the values of the free variables.

For example, consider the following system:

The solution set to this system can be described by the following equations:

Here z is the free variable, while x and y are dependent on z. Any point in the solution set can be obtained by first choosing a value for z, and then computing the corresponding values for x and y.

Each free variable gives the solution space one degree of freedom, the number of which is equal to the dimension of the solution set. For example, the solution set for the above equation is a line, since a point in the solution set can be chosen by specifying the value of the parameter z. An infinite solution of higher order may describe a plane, or higher-dimensional set.

Different choices for the free variables may lead to different descriptions of the same solution set. For example, the solution to the above equations can alternatively be described as follows:

Here x is the free variable, and y and z are dependent.

The simplest method for solving a system of linear equations is to repeatedly eliminate variables. This method can be described as follows:

For example, consider the following system:

Solving the first equation for x gives x = 5 + 2z − 3y, and plugging this into the second and third equation yields

Solving the first of these equations for y yields y = 2 + 3z, and plugging this into the second equation yields z = 2. We now have:

{{#invoke:main|main}} In row reduction, the linear system is represented as an augmented matrix:

Type 1: Swap the positions of two rows.
Type 2: Multiply a row by a nonzero scalar.
Type 3: Add to one row a scalar multiple of another.

Because these operations are reversible, the augmented matrix produced always represents a linear system that is equivalent to the original.

The last matrix is in reduced row echelon form, and represents the system x = −15, y = 8, z = 2. A comparison with the example in the previous section on the algebraic elimination of variables shows that these two methods are in fact the same; the difference lies in how the computations are written down.

{{#invoke:main|main}} Cramer's rule is an explicit formula for the solution of a system of linear equations, with each variable given by a quotient of two determinants. For example, the solution to the system

Though Cramer's rule is important theoretically, it has little practical value for large matrices, since the computation of large determinants is somewhat cumbersome. (Indeed, large determinants are most easily computed using row reduction.) Further, Cramer's rule has very poor numerical properties, making it unsuitable for solving even small systems reliably, unless the operations are performed in rational arithmetic with unbounded precision.

If the equation system is expressed in the matrix form

, the entire solution set can also be expressed in matrix form. If the matrix A is square (has m rows and n=m columns) and has full rank (all m rows are independent), then the system has a unique solution given by

is the inverse of A. More generally, regardless of whether m=n or not and regardless of the rank of A, all solutions (if any exist) are given using the Moore-Penrose pseudoinverse of A, denoted

is a vector of free parameters that ranges over all possible n×1 vectors. A necessary and sufficient condition for any solution(s) to exist is that the potential solution obtained using

If this condition does not hold, the equation system is inconsistent and has no solution. If the condition holds, the system is consistent and at least one solution exists. For example, in the above-mentioned case in which A is square and of full rank,

and the general solution equation simplifies to

as previously stated, where

has completely dropped out of the solution, leaving only a single solution. In other cases, though,

give an infinitude of solutions of the equation.

While systems of three or four equations can be readily solved by hand, computers are often used for larger systems. The standard algorithm for solving a system of linear equations is based on Gaussian elimination with some modifications. Firstly, it is essential to avoid division by small numbers, which may lead to inaccurate results. This can be done by reordering the equations if necessary, a process known as pivoting. Secondly, the algorithm does not exactly do Gaussian elimination, but it computes the LU decomposition of the matrix A. This is mostly an organizational tool, but it is much quicker if one has to solve several systems with the same matrix A but different vectors b.

If the matrix A has some special structure, this can be exploited to obtain faster or more accurate algorithms. For instance, systems with a symmetric positive definite matrix can be solved twice as fast with the Cholesky decomposition. Levinson recursion is a fast method for Toeplitz matrices. Special methods exist also for matrices with many zero elements (so-called sparse matrices), which appear often in applications.

A completely different approach is often taken for very large systems, which would otherwise take too much time or memory. The idea is to start with an initial approximation to the solution (which does not have to be accurate at all), and to change this approximation in several steps to bring it closer to the true solution. Once the approximation is sufficiently accurate, this is taken to be the solution to the system. This leads to the class of iterative methods.

{{#invoke:see also|seealso}} A system of linear equations is homogeneous if all of the constant terms are zero:

where A is an m × n matrix, x is a column vector with n entries, and 0 is the zero vector with m entries.

Specifically, if p is any specific solution to the linear system Ax = b, then the entire solution set can be described as

This reasoning only applies if the system Ax = b has at least one solution. This occurs if and only if the vector b lies in the image of the linear transformation A.