I have rewritten the intro and added the section "Accept and Generate modes", both of which aim to be a non-technical introduction. Is this sufficient to remove the technical flag? Ounsworth (talk) 18:50, 5 August 2010 (UTC)

To what field of human endeavor does this relate? Could someone put an introductory sentance in English for the rest of us? Thanks! ;) Mark Richards 06:21, 14 May 2004 (UTC)

Thanks Jaredwf Just a stupid question though - Finite State Machine says that it is related to 'computer science', while DFST points to 'Theory of computing'. Is this as it should be? Thanks! Mark Richards 15:39, 14 May 2004 (UTC)

The symbols used to describe the 5-tuple are inconsistent with those in Automata theory. Is it better to change to

? My textbook also uses these notations.

i m a student of computer science engineering and for me automata theory and formal languages is a very new subject. i m not being able to get hold of the subject properly. i cannot understand the subject. please suggest somthing. —Preceding unsigned comment added by 115.248.12.253 (talk) 06:23, 6 March 2010 (UTC)

Regular languages in relation to FSM

Can someone please explain the following entry in the article more. Now sure what this exactly is in relation to FSM (the article on regular language is just as perplexing).

The language of M can be described by the regular language given by this regular expression: 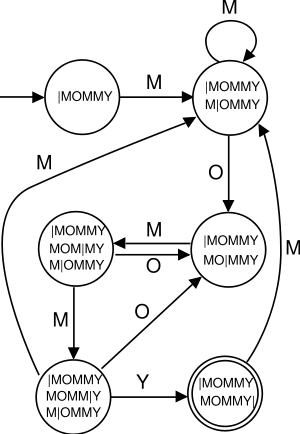 I've just fixed up the DFA image Image:DFA search mommy.svg so that it renders again. It's intended for string search algorithm but may be useful here. Dcoetzee 03:57, 2 April 2007 (UTC)

The definition for DFA states that there should be one and only one transition for each pair of states and inputs. The definition for NFA only addresses the case of a single input leading to multiple, different states. What about the case where an input leads off to a "dummy state" that just loops back to itself on every input? If we just eliminate the dummy state and any inputs leading to it, does the diagram still represent a DFA? If not, is it an NFA? Or something else? Thanks, Maghnus 15:25, 29 October 2007 (UTC)

Missing paths are no big deal; the definition of what it means to run such an automaton will most likely say that if a path is missing, the automaton immediately halts (this can be simulated by adding an extra state and a new path to this state for each missing path in the original automaton). So long as there are never two paths on the same state/input pair, the automaton is deterministic. — Carl (CBM · talk) 03:21, 23 December 2007 (UTC)

In the section "Advantages and Disadvantages", the example discribes the "bracket" language - i.e. properly paired brackets. This is not formally anbn, as stated, but "Strings whose each prefix has more or equal a's than b's" Raghunandan ma (talk) 10:18, 16 August 2011 (UTC)

Thank you. It looks better now. Also I suggest:

DFAs are equivalent in computing power to nondeterministic finite automata (NFAs). This is because, firstly any DFA is also an NFA, so an NFA can do what a DFA can do. Also, given an NFA, one can build a DFA that recognizes the same language as the NFA, although the DFA could have exponentially larger number of states than the NFA. Raghunandan ma (talk) 06:46, 17 August 2011 (UTC)

Your suggestion is good. Please add it yourself. I also suggest to cite powerset construction page for the algorithm that translates NFA into DFA. (Ashutosh Gupta (talk) 11:30, 17 August 2011 (UTC))

Have added this. Also made some small changes in the wording for union/intersection/complement at the beginning of this section. Raghunandan ma (talk) 06:53, 18 August 2011 (UTC)

– These are more popular names of the automata theory concepts. Even within the articles the objects are referred as (non)deterministic finite automaton. Ashutosh Gupta (talk) 15:04, 25 November 2011 (UTC)

The above discussion is preserved as an archive of a requested move. Please do not modify it. Subsequent comments should be made in a new section on this talk page. No further edits should be made to this section.

The article states that:

Many simple languages, including any problem that requires more than constant space to solve, cannot be recognized by a DFA. [...] Another simpler example is the language consisting of strings of the form anbn — some finite number of a's, followed by an equal number of b's.

I don't think that is correct. Consider the following state diagram:

As long as n is limited to a specific finite number, it looks like a DFA can indeed be built for the language anbn. Granted, it will take a large number of states (perhaps on the order of 2n?) to embed the counting of a's and b's, but it still seems possible. Or did I miss something in the text? — Loadmaster (talk) 17:48, 27 January 2014 (UTC)

The wording is intended to describe the language

which has infinitely many words (indeed, exactly one of length 2n for every n≥0) and I think it does so. This is not a regular language, and cannot be recognised by a DFA. Deltahedron (talk) 19:38, 27 January 2014 (UTC)