In mathematics, the tangent space of a manifold facilitates the generalization of vectors from affine spaces to general manifolds, since in the latter case one cannot simply subtract two points to obtain a vector pointing from one to the other. 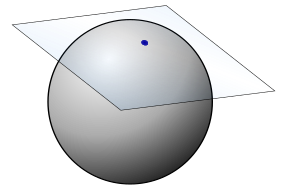 In differential geometry, one can attach to every point x of a differentiable manifold a tangent space, a real vector space that intuitively contains the possible "directions" at which one can tangentially pass through x. The elements of the tangent space are called tangent vectors at x. This is a generalization of the notion of a bound vector in a Euclidean space. All the tangent spaces of a connected manifold have the same dimension, equal to the dimension of the manifold.

For example, if the given manifold is a 2-sphere, one can picture a tangent space at a point as the plane which touches the sphere at that point and is perpendicular to the sphere's radius through the point. More generally, if a given manifold is thought of as an embedded submanifold of Euclidean space one can picture a tangent space in this literal fashion. This was the traditional approach to defining parallel transport, and used by Dirac.[1] More strictly this defines an affine tangent space, distinct from the space of tangent vectors described by modern terminology.

In algebraic geometry, in contrast, there is an intrinsic definition of tangent space at a point P of a variety V, that gives a vector space of dimension at least that of V. The points P at which the dimension is exactly that of V are called the non-singular points; the others are singular points. For example, a curve that crosses itself doesn't have a unique tangent line at that point. The singular points of V are those where the 'test to be a manifold' fails. See Zariski tangent space.

All the tangent spaces can be "glued together" to form a new differentiable manifold of twice the dimension of the original manifold, called the tangent bundle of the manifold.

There are various equivalent ways of defining the tangent spaces of a manifold. While the definition via velocities of curves is quite straightforward given the above intuition, it is also the most cumbersome to work with. More elegant and abstract approaches are described below.

Definition as velocities of curves

and a tangent vector

, along a curve traveling through

(φ ∘ γ)(0). It turns out that this map is bijective and can thus be used to transfer the vector space operations from Rn over to TxM, turning the latter into an n-dimensional real vector space. Again, one needs to check that this construction does not depend on the particular chart φ chosen, and in fact it does not.

Suppose M is a C∞ manifold. A real-valued function ƒ: M → R belongs to C∞(M) if ƒ ∘ φ−1 is infinitely differentiable for every chart φ : U → Rn. C∞(M) is a real associative algebra for the pointwise product and sum of functions and scalar multiplication.

modeled on the product rule of calculus. If we define addition and scalar multiplication for such derivations by

we get a real vector space which we define as the tangent space TxM.

The relation between the tangent vectors defined earlier and derivations is as follows: if γ is a curve with tangent vector γ'(0), then the corresponding derivation is D(ƒ) = (ƒ ∘ γ)'(0) (where the derivative is taken in the ordinary sense, since ƒ ∘ γ is a function from (-1,1) to R).

Generalizations of this definition are possible, for instance to complex manifolds and algebraic varieties. However, instead of examining derivations D from the full algebra of functions, one must instead work at the level of germs of functions. The reason is that the structure sheaf may not be fine for such structures. For instance, let X be an algebraic variety with structure sheaf OX. Then the Zariski tangent space at a point p∈X is the collection of K-derivations D:OX,p→K, where K is the ground field and OX,p is the stalk of OX at p.

Definition via the cotangent space

Again we start with a C∞ manifold, M, and a point, x, in M. Consider the ideal, I, in C∞(M) consisting of all functions, ƒ, such that ƒ(x) = 0. That is, of functions defining curves, surfaces, etc. passing through x. Then I and I 2 are real vector spaces, and TxM may be defined as the dual space of the quotient space I / I 2. This latter quotient space is also known as the cotangent space of M at x.

While this definition is the most abstract, it is also the one most easily transferred to other settings, for instance to the varieties considered in algebraic geometry.

If M is an open subset of Rn, then M is a C∞ manifold in a natural manner (take the charts to be the identity maps), and the tangent spaces are all naturally identified with Rn.

This map is naturally a derivation. Moreover, it turns out that every derivation of C∞(Rn) is of this form. So there is a one-to-one map between vectors (thought of as tangent vectors at a point) and derivations.

The derivative of a map

If instead the tangent space is defined via derivations, then

The linear map dφx is called variously the derivative, total derivative, differential, or pushforward of φ at x. It is frequently expressed using a variety of other notations:

In a sense, the derivative is the best linear approximation to φ near x. Note that when N = R, the map dφx : TxM→R coincides with the usual notion of the differential of the function φ. In local coordinates the derivative of ƒ is given by the Jacobian.

An important result regarding the derivative map is the following:

Theorem. If φ : M → N is a local diffeomorphism at x in M then dφx : TxM → Tφ(x)N is a linear isomorphism. Conversely, if dφx is an isomorphism then there is an open neighborhood U of x such that φ maps U diffeomorphically onto its image.

This is a generalization of the inverse function theorem to maps between manifolds.