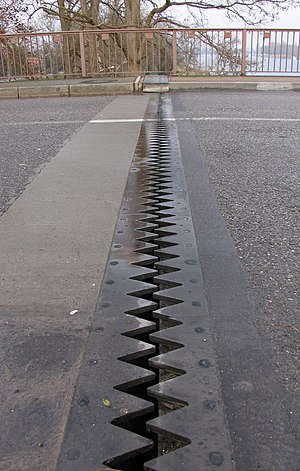 Expansion joint in a road bridge used to avoid damage from thermal expansion.

Thermal expansion is the tendency of matter to change in volume in response to a change in temperature,[1] through heat transfer.

Temperature is a monotonic function of the average molecular kinetic energy of a substance. When a substance is heated, the kinetic energy of its molecules increases. Thus, the molecules begin moving more and usually maintain a greater average separation. Materials which contract with increasing temperature are unusual; this effect is limited in size, and only occurs within limited temperature ranges (see examples below). The degree of expansion divided by the change in temperature is called the material's coefficient of thermal expansion and generally varies with temperature.

If an equation of state is available, it can be used to predict the values of the thermal expansion at all the required temperatures and pressures, along with many other state functions.

Unlike gases or liquids, solid materials tend to keep their shape when undergoing thermal expansion.

Thermal expansion generally decreases with increasing bond energy, which also has an effect on the melting point of solids, so, high melting point materials are more likely to have lower thermal expansion. In general, liquids expand slightly more than solids. The thermal expansion of glasses is higher compared to that of crystals.[3] At the glass transition temperature, rearrangements that occur in an amorphous material lead to characteristic discontinuities of coefficient of thermal expansion or specific heat. These discontinuities allow detection of the glass transition temperature where a supercooled liquid transforms to a glass.[4]

Absorption or desorption of water (or other solvents) can change the size of many common materials; many organic materials change size much more due to this effect than they do to thermal expansion. Common plastics exposed to water can, in the long term, expand by many percent.

The coefficient of thermal expansion describes how the size of an object changes with a change in temperature. Specifically, it measures the fractional change in size per degree change in temperature at a constant pressure. Several types of coefficients have been developed: volumetric, area, and linear. Which is used depending on the particular application and which dimensions are considered important. For solids, one might only be concerned with the change along a length, or over some area.

Mathematical definitions of these coefficients are defined below for solids, liquids, and gases.

In the general case of a gas, liquid, or solid, the volumetric coefficient of thermal expansion is given by

The subscript p indicates that the pressure is held constant during the expansion, and the subscript "V" stresses that it is the volumetric (not linear) expansion that enters this general definition. In the case of a gas, the fact that the pressure is held constant is important, because the volume of a gas will vary appreciably with pressure as well as temperature. For a gas of low density this can be seen from the ideal gas law.

Materials generally change their size when subjected to a temperature change while the pressure is held constant. In the special case of solid materials, the pressure does not appreciably affect the size of an object, and so, for solids, it's usually not necessary to specify that the pressure be held constant.

Common engineering solids usually have coefficients of thermal expansion that do not vary significantly over the range of temperatures where they are designed to be used, so where extremely high accuracy is not required, practical calculations can be based on a constant, average, value of the coefficient of expansion.

Change in length of a rod due to thermal expansion.

is a particular length measurement and

is the rate of change of that linear dimension per unit change in temperature.

The change in the linear dimension can be estimated to be:

. If it does, the equation must be integrated.

For solid materials with a significant length, like rods or cables, an estimate of the amount of thermal expansion can be described by the material strain, given by

is the length before the change of temperature and

is the length after the change of temperature.

For most solids, thermal expansion is proportional to the change in temperature:

Thus, the change in either the strain or temperature can be estimated by:

is the difference of the temperature between the two recorded strains, measured in degrees Celsius or Kelvin, and

is the linear coefficient of thermal expansion in "per degree Celsius" or "per Kelvin", denoted by °C−1 or K−1, respectively. In the field of continuum mechanics, the thermal expansion and its effects are treated as eigenstrain and eigenstress.

The area thermal expansion coefficient relates the change in a material's area dimensions to a change in temperature. It is the fractional change in area per degree of temperature change. Ignoring pressure, we may write:

is some area of interest on the object, and

is the rate of change of that area per unit change in temperature.

The change in the area can be estimated as:

. If it does, the equation must be integrated.

For a solid, we can ignore the effects of pressure on the material, and the volumetric thermal expansion coefficient can be written:[5]

is the volume of the material, and

is the rate of change of that volume with temperature.

If we already know the expansion coefficient, then we can calculate the change in volume

is the starting temperature and

is the volumetric expansion coefficient as a function of temperature T.

This ratio arises because volume is composed of three mutually orthogonal directions. Thus, in an isotropic material, for small differential changes, one-third of the volumetric expansion is in a single axis. As an example, take a cube of steel that has sides of length L. The original volume will be

and the new volume, after a temperature increase, will be

We can make the substitutions

and, for isotropic materials,

Since the volumetric and linear coefficients are defined only for extremely small temperature and dimensional changes (that is, when

are small), the last two terms can be ignored and we get the above relationship between the two coefficients. If we are trying to go back and forth between volumetric and linear coefficients using larger values of

then we will need to take into account the third term, and sometimes even the fourth term.

This ratio can be found in a way similar to that in the linear example above, noting that the area of a face on the cube is just

. Also, the same considerations must be made when dealing with large values of

Materials with anisotropic structures, such as crystals (with less than cubic symmetry) and many composites, will generally have different linear expansion coefficients

in different directions. As a result, the total volumetric expansion is distributed unequally among the three axes. If the crystal symmetry is monoclinic or triclinic, even the angles between these axes are subject to thermal changes. In such cases it is necessary to treat the coefficient of thermal expansion as a tensor with up to six independent elements. A good way to determine the elements of the tensor is to study the expansion by powder diffraction.

For an ideal gas, the volumetric thermal expansion (i.e., relative change in volume due to temperature change) depends on the type of process in which temperature is changed. Two simple cases are isobaric change, where pressure is held constant, and adiabatic change, where no heat is exchanged with the environment.

In an isobaric process, the volumetric thermal expansivity, which we denote

, is given by the ideal gas law:

Expansion in mixtures and alloys

The expansivity of the components of the mixture can cancel each other like in invar. 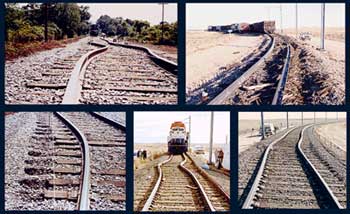 Thermal expansion of long continuous sections of rail tracks is the driving force for rail buckling. This phenomenon resulted in 190 train derailments during 1998–2002 in the US alone.[7]

The expansion and contraction of materials must be considered when designing large structures, when using tape or chain to measure distances for land surveys, when designing molds for casting hot material, and in other engineering applications when large changes in dimension due to temperature are expected.

Thermal expansion is also used in mechanical applications to fit parts over one another, e.g. a bushing can be fitted over a shaft by making its inner diameter slightly smaller than the diameter of the shaft, then heating it until it fits over the shaft, and allowing it to cool after it has been pushed over the shaft, thus achieving a 'shrink fit'. Induction shrink fitting is a common industrial method to pre-heat metal components between 150 °C and 300 °C thereby causing them to expand and allow for the insertion or removal of another component.

There exist some alloys with a very small linear expansion coefficient, used in applications that demand very small changes in physical dimension over a range of temperatures. One of these is Invar 36, with α approximately equal to 0.6Template:E K−1. These alloys are useful in aerospace applications where wide temperature swings may occur.

Pullinger's apparatus is used to determine the linear expansion of a metallic rod in the laboratory. The apparatus consists of a metal cylinder closed at both ends (called a steam jacket). It is provided with an inlet and outlet for the steam. The steam for heating the rod is supplied by a boiler which is connected by a rubber tube to the inlet. The center of the cylinder contains a hole to insert a thermometer. The rod under investigation is enclosed in a steam jacket. One of its ends is free, but the other end is pressed against a fixed screw. The position of the rod is determined by a micrometer screw gauge or spherometer. 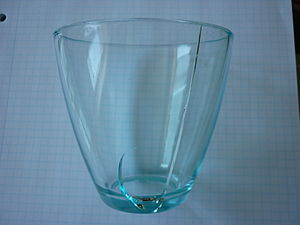 The control of thermal expansion in brittle materials is a key concern for a wide range of reasons. For example, both glass and ceramics are brittle and uneven temperature causes uneven expansion which again causes thermal stress and this might lead to fracture. Ceramics need to be joined or work in consort with a wide range of materials and therefore their expansion must be matched to the application. Because glazes need to be firmly attached to the underlying porcelain (or other body type) their thermal expansion must be tuned to 'fit' the body so that crazing or shivering do not occur. Good example of products whose thermal expansion is the key to their success are CorningWare and the spark plug. The thermal expansion of ceramic bodies can be controlled by firing to create crystalline species that will influence the overall expansion of the material in the desired direction. In addition or instead the formulation of the body can employ materials delivering particles of the desired expansion to the matrix. The thermal expansion of glazes is controlled by their chemical composition and the firing schedule to which they were subjected. In most cases there are complex issues involved in controlling body and glaze expansion, adjusting for thermal expansion must be done with an eye to other properties that will be affected, generally trade-offs are required.

Heat-induced expansion has to be taken into account in most areas of engineering. A few examples are:

Thermometers are another application of thermal expansion — most contain a liquid (usually mercury or alcohol) which is constrained to flow in only one direction (along the tube) due to changes in volume brought about by changes in temperature. A bi-metal mechanical thermometer uses a bimetallic strip and bends due to the differing thermal expansion of the two metals.

Metal pipes made of different materials are heated by passing steam through them. While each pipe is being tested, one end is securely fixed and the other rests on a rotating shaft, the motion of which is indicated with a pointer. The linear expansion of the different metals is compared qualitatively and the coefficient of linear thermal expansion is calculated. 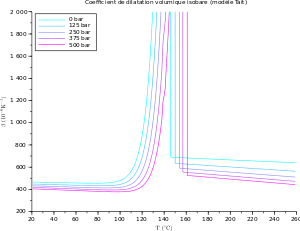 This section summarizes the coefficients for some common materials.