Unless stated otherwise, the underlying field of a topological vector space is assumed to be either the complex numbers C or the real numbers R. 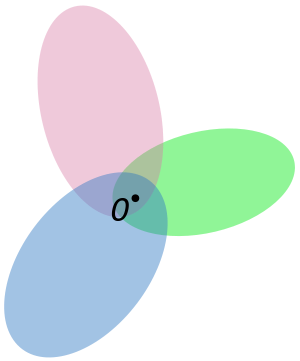 A topological vector space X is a vector space over a topological field K (most often the real or complex numbers with their standard topologies) which is endowed with a topology such that vector addition X × X → X and scalar multiplication K × X → X are continuous functions (where the domains of these functions are endowed with product topologies).

Some authors (e.g., Rudin) require the topology on X to be T1; it then follows that the space is Hausdorff, and even Tychonoff. The topological and linear algebraic structures can be tied together even more closely with additional assumptions, the most common of which are listed below.

However, there are topological vector spaces whose topology is not induced by a norm but are still of interest in analysis. Examples of such spaces are spaces of holomorphic functions on an open domain, spaces of infinitely differentiable functions, the Schwartz spaces, and spaces of test functions and the spaces of distributions on them. These are all examples of Montel spaces. On the other hand, infinite dimensional Montel spaces are never normable.

Every topological vector space has a local base of absorbing and balanced sets.

A sequence {xn} is said to be Cauchy if for every neighborhood V of 0, the difference xm − xn belongs to V when m and n are sufficiently large. Every Cauchy sequence is bounded, although Cauchy nets or Cauchy filters may not be bounded. A topological vector space where every Cauchy sequence converges is sequentially complete but may not be complete (in the sense Cauchy filters converge). Every compact set is bounded.

Depending on the application additional constraints are usually enforced on the topological structure of the space. In fact, several principal results in functional analysis fail to hold in general for topological vector spaces: the closed graph theorem, the open mapping theorem, and the fact that the dual space of the space separates points in the space.

Below are some common topological vector spaces, roughly ordered by their niceness.

Every topological vector space has a continuous dual space—the set V* of all continuous linear functionals, i.e. continuous linear maps from the space into the base field K. A topology on the dual can be defined to be the coarsest topology such that the dual pairing each point evaluation V* → K is continuous. This turns the dual into a locally convex topological vector space. This topology is called the weak-* topology. This may not be the only natural topology on the dual space; for instance, the dual of a normed space has a natural norm defined on it. However, it is very important in applications because of its compactness properties (see Banach–Alaoglu theorem). Caution: Whenever V is a not-normable locally convex space, then the pairing map V* × V → K is never continuous, no matter which vector space topology one chooses on V*.