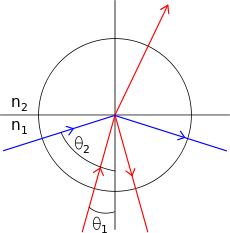 The larger the angle to the normal, the smaller is the fraction of light transmitted rather than reflected, until the angle at which total internal reflection occurs. (The color of the rays is to help distinguish the rays, and is not meant to indicate any color dependence.)

Total internal reflection in a block of acrylic

Total internal reflection is a phenomenon that happens when a propagating wave strikes a medium boundary at an angle larger than a particular critical angle with respect to the normal to the surface. If the refractive index is lower on the other side of the boundary and the incident angle is greater than the critical angle, the wave cannot pass through and is entirely reflected. The critical angle is the angle of incidence above which the total internal reflection occurs. This is particularly common as an optical phenomenon, where light waves are involved, but it occurs with many types of waves, such as electromagnetic waves in general or sound waves.

When a wave crosses a boundary between different materials with different kinds of refractive indices, the wave will be partially refracted at the boundary surface, and partially reflected. However, if the angle of incidence is greater (i.e. the direction of propagation or ray is closer to being parallel to the boundary) than the critical angle – the angle of incidence at which light is refracted such that it travels along the boundary – then the wave will not cross the boundary and instead be totally reflected back internally. This can only occur when the wave in a medium with a higher refractive index (n1) hits its surface that's in contact with a medium of lower refractive index (n2). For example, it will occur with light hitting air from glass, but not when hitting glass from air.

Total internal reflection of light can be demonstrated using a semi-circular block of glass or plastic. A "ray box" shines a narrow beam of light (a "ray") onto the glass. The semi-circular shape ensures that a ray pointing towards the centre of the flat face will hit the curved surface at a right angle; this will prevent refraction at the air/glass boundary of the curved surface. At the glass/air boundary of the flat surface, what happens will depend on the angle. Where θc is the critical angle measurement which is caused by the sun or a light source (measured normal to the surface):

This physical property makes optical fibers useful and prismatic binoculars possible. It is also what gives diamonds their distinctive sparkle, as diamond has an unusually high refractive index.

The critical angle is the angle of incidence above which total internal reflection occurs. The angle of incidence is measured with respect to the normal at the refractive boundary (see diagram illustrating Snell's law). Consider a light ray passing from glass into air. The light emanating from the interface is bent towards the glass. When the incident angle is increased sufficiently, the transmitted angle (in air) reaches 90 degrees. It is at this point no light is transmitted into air. The critical angle

is given by Snell's law,

Rearranging Snell's Law, we get incidence

To find the critical angle, we find the value for

. The resulting value of

is equal to the critical angle

Now, we can solve for

, and we get the equation for the critical angle:

If the incident ray is precisely at the critical angle, the refracted ray is tangent to the boundary at the point of incidence. If for example, visible light were traveling through acrylic glass (with an index of refraction of approximately 1.50) into air (with an index of refraction of 1.00), the calculation would give the critical angle for light from acrylic into air, which is

is greater than 1, then arcsine is not defined—meaning that total internal reflection does not occur even at very shallow or grazing incident angles.

So the critical angle is only defined when

Refraction of light at the interface between two media, including total internal reflection.

A special name is given to the angle of incidence that produces an angle of refraction of 90˚. It is called the critical angle.

An important side effect of total internal reflection is the appearance of an evanescent wave beyond the boundary surface. Essentially, even though the entire incident wave is reflected back into the originating medium, there is some penetration into the second medium at the boundary. The evanescent wave appears to travel along the boundary between the two materials, leading to the Goos-Hänchen shift.

If a plane wave, confined to the xz plane, is incident on a dielectric with an angle

then a transmitted ray will be created with a corresponding angle of transmittance as shown in the figure above. The transmitted wavevector is given by:

since in the relation

is greater than one for

As a result of this

The electric field of the transmitted plane wave is given by

and so evaluating this further one obtains:

Using the fact that

and Snell's law, one finally obtains

This wave in the optically less dense medium is known as the evanescent wave. It is characterized by its propagation in the x direction and its exponential attenuation in the z direction. Although there is a field in the second medium, it can be shown that no energy flows across the boundary. The component of Poynting vector in the direction normal to the boundary is finite, but its time average vanishes. Whereas the other two components of Poynting vector (here x-component only), and their time averaged values are in general found to be finite (i.e. nonzero). 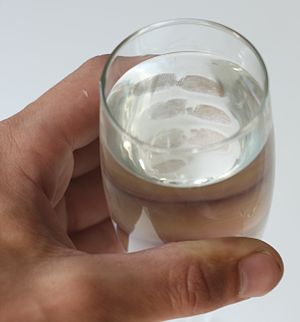 When a glass of water is held firmly, ridges making up the fingerprints are made visible by frustrated total internal reflection. Light tunnels from the glass into the ridges through the very short air gap.[1]

{{#invoke:see also|seealso}} Under ordinary conditions, the evanescent wave transmits zero net energy across the interface. However, if a third medium with a higher refractive index than the low-index second medium is placed within less than several wavelengths distance from the interface between the first medium and the second medium, the evanescent wave will be different from the usual one, and it will pass energy across the second into the third medium. (See evanescent wave coupling.) This process is called "frustrated" total internal reflection (FTIR) and is very similar to quantum tunneling. The quantum tunneling model is mathematically analogous if one thinks of the electromagnetic field as being the wave function of the photon. The low index medium can be thought of as a potential barrier through which photons can tunnel.

The transmission coefficient for FTIR is highly sensitive to the spacing between the third medium and the second medium (the function is approximately exponential until the gap is almost closed), so this effect has often been used to modulate optical transmission and reflection with a large dynamic range.

A lesser-known aspect of total internal reflection is that the reflected light has an angle dependent phase shift between the reflected and incident light. Mathematically this means that the Fresnel reflection coefficient becomes a complex rather than a real number. This phase shift is polarization dependent and grows as the incidence angle deviates further from the critical angle toward grazing incidence. 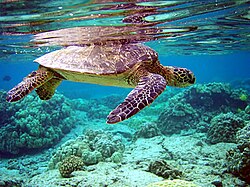 Total internal reflection can be seen at the air-water boundary.

Total internal reflection can be observed while swimming, when one opens one's eyes just under the water's surface. If the water is calm, its surface appears mirror-like.

Diamonds used for jewelry are normally shaped in such a way as to maximize the amount of light that is totally internally reflected from the back side of the diamond. The very high refractive index of diamond gives a large critical angle allowing almost all the light entering the diamond to be reflected back for optimized diamond cuts such as the brilliant.