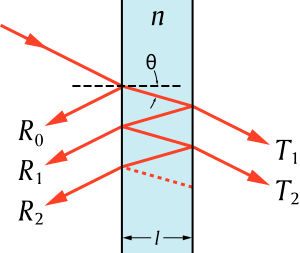 Propagation of a ray through a layer

The transfer-matrix method is a method used in optics and acoustics to analyze the propagation of electromagnetic or acoustic waves through a stratified (layered) medium.[1] This is for example relevant for the design of anti-reflective coatings and dielectric mirrors.

The reflection of light from a single interface between two media is described by the Fresnel equations. However, when there are multiple interfaces, such as in the figure, the reflections themselves are also partially transmitted and then partially reflected. Depending on the exact path length, these reflections can interfere destructively or constructively. The overall reflection of a layer structure is the sum of an infinite number of reflections, which is cumbersome to calculate.

The transfer-matrix method is based on the fact that, according to Maxwell's equations, there are simple continuity conditions for the electric field across boundaries from one medium to the next. If the field is known at the beginning of a layer, the field at the end of the layer can be derived from a simple matrix operation. A stack of layers can then be represented as a system matrix, which is the product of the individual layer matrices. The final step of the method involves converting the system matrix back into reflection and transmission coefficients.

Below is described how the transfer matrix is applied to electromagnetic waves (for example light) of a given frequency propagating through a stack of layers at normal incidence. It can be generalized to deal with incidence at an angle, absorbing media, and media with magnetic properties. We assume that the stack layers are normal to the

Because it follows from Maxwell's equation that

must be continuous across a boundary, it is convenient to represent the field as the vector

Since there are two equations relating

direction is described by the matrix

Such a matrix can represent propagation through a layer if

is the wave number in the medium and

the thickness of the layer: For a system with

has a transfer matrix

values. The system transfer matrix is then

Typically, one would like to know the reflectance and transmittance of the layer structure. If the layer stack starts at

, the field is described as

is the amplitude of the incoming wave,

the wave number in the left medium, and

is the amplitude transmittance and

is the wave number in the rightmost medium. If

, then we can solve

of the system matrix

The transmittance and reflectance (i.e., the fractions of the incident intensity

As an illustration, consider a single layer of glass with a refractive index n and thickness d suspended in air at a wave number k (in air). In glass, the wave number is

. The transfer matrix is

The amplitude reflection coefficient can be simplified to

This configuration effectively describes a Fabry–Pérot interferometer or etalon: for

It is possible to apply the transfer-matrix method to sound waves. Instead of the electric field E and its derivative F, the displacement u and the stress

is the p-wave modulus, should be used.

The Abeles matrix method is a computationally fast and easy way to calculate the specular reflectivity from a stratified interface, as a function of the perpendicular momentum transfer, Qz.

Reflection from a strafied interface

Where θ is the angle of incidence/reflection of the incident radiation and λ is the wavelength of the radiation. The measured reflectivity depends on the variation in the scattering length density (SLD) profile, (ρ(z)) perpendicular to the interface. Although the scattering length density profile is normally a continuously varying function, the interfacial structure can often be well approximated by a slab model in which layers of thickness (dn), scattering length density (ρn) and roughness (σn,n+1) are sandwiched between the super- and sub-phases. One then uses a refinement procedure to minimise the differences between the theoretical and measured reflectivity curves, by changing the parameters that describe each layer.

In this description the interface is split into n layers. Since the incident neutron beam is refracted by each of the layers the wavevector, k, in layer n, is given by:

The Fresnel reflection coefficient between layer n and n+1 is then given by:

Since the interface between each layer is unlikely to be perfectly smooth the roughness/diffuseness of each interface modifies the Fresnel coefficient and is accounted for by an error function, as described by Nevot and Croce (1980).

A phase factor, β is introduced, which accounts for the thickness of each layer.

. A characteristic matrix, cn is then calculated for each layer.

from which the reflectivity is calculated

There are a number of computer programs that implement this calculation: