File:Beer lambert1.png
Diagram of Beer-Lambert Law of transmittance of a beam of light as it travels through a cuvette of width l. 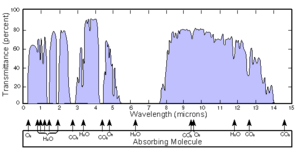 Earth's atmospheric transmittance over 1 nautical mile sea level path (infrared region[1]). Because of the natural radiation of the hot atmosphere, the intensity of radiation is different from the transmitted part.

In optics and spectroscopy, transmittance is the fraction of incident light (electromagnetic radiation) at a specified wavelength that passes through a sample.[2][3] The terms visible transmittance (VT) and visible absorptance (VA), which are the respective fractions for the spectrum of light visible radiation, are also used. The natural radiation of the cuvette corresponding to the temperature of the cuvette remains ignored - see radiative transfer equation.

A related term is absorbance,[4] or absorption factor,[5] which is the fraction of radiation absorbed by a sample at a specified wavelength.

In equation form, the transmittance

is the intensity of the incident radiation. In these equations, scattering and reflection are considered to be close to zero or otherwise accounted for. The transmittance of a sample is sometimes given as a percentage.

Note that the term "transmission" refers to the physical process of radiation passing through a sample, whereas transmittance refers to the mathematical quantity.

Transmittance is related to absorbance A as:[4]

Transmittance is related to optical depth τλ or simply τ (not to be confused with absorbance nor absorptance, also known as optical density) as

From the above equation for the inverse problem the transmittance is thus given by:

If one want to express optical depth in decibels:

where, when the plane parallel assumption is invoked,

the angle of propagation of the ray from the normal of the surface.

In case of uniform attenuation optical depth is simply:

where Σ is the attenuation coefficient, N is the medium concentration, σ the total cross sectionTemplate:Disambiguation needed and

the geometrical path length, so the transmittance is:

for example if there is a strong temperature or pressure nonuniformity in a material, the concentration is nonuniform but the cross section is uniform, so:

This is the case of atmospheric science applications and also of radiation shielding theory.

Another equation that can be useful in solving for

is a measure of absorbance. By manipulating the equation you can generate the more direct form of the equation: