In computer science, tree traversal (also known as tree search) is a form of graph traversal and refers to the process of visiting (examining and/or updating) each node in a tree data structure, exactly once, in a systematic way. Such traversals are classified by the order in which the nodes are visited. The following algorithms are described for a binary tree, but they may be generalized to other trees as well. 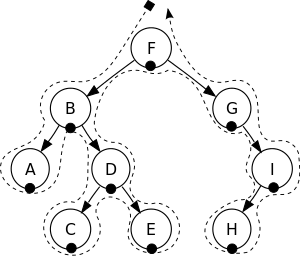 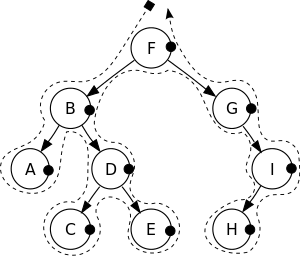 Compared to linear data structures like linked lists and one-dimensional arrays, which have a canonical method of traversal (namely in linear order), tree structures can be traversed in many different ways. Starting at the root of a binary tree, there are three main steps that can be performed and the order in which they are performed defines the traversal type. These steps (in no particular order) are: performing an action on the current node (referred to as "visiting" the node), traversing to the left child node, and traversing to the right child node.

Traversing a tree involves iterating (looping) over all nodes in some manner. Because from a given node there is more than one possible next node (it is not a linear data structure), then, assuming sequential computation (not parallel), some nodes must be deferred – stored in some way for later visiting. This is often done via a stack (LIFO) or queue (FIFO). As a tree is a self-referential (recursively defined) data structure, traversal can naturally be described by recursion or, more subtly, corecursion, in which case the deferred nodes are stored implicitly – in the case of recursion, in the call stack.

For the purpose of illustration, it is assumed that left nodes always have priority over right nodes. This ordering can be reversed as long as the same ordering is assumed for all traversal methods.

Beyond these basic traversals, various more complex or hybrid schemes are possible, such as depth-limited searches such as iterative deepening depth-first search.

{{#invoke:see also|seealso}} There are three types of depth-first traversal: pre-order,[1] in-order,[1] and post-order.[1] For a binary tree, they are defined as display operations recursively at each node, starting with the root node, whose algorithm is as follows:

The trace of a traversal is called a sequentialisation of the tree. The traversal trace is a list of each visited root node. No one sequentialisation according to pre-, in- or post-order describes the underlying tree uniquely. Given a tree with distinct elements, either pre-order or post-order paired with in-order is sufficient to describe the tree uniquely. However, pre-order with post-order leaves some ambiguity in the tree structure.[4]

To traverse any tree in depth-first order, perform the following operations recursively at each node:

{{#invoke:see also|seealso}} Trees can also be traversed in level-order, where we visit every node on a level before going to a lower level. This search is referred to as breadth-first search, as the search tree is broadened as much as possible on each depth before making going to the next depth.

There are also tree traversal algorithms that classify as neither depth-first search nor breadth-first search. One such algorithm is Monte Carlo tree search, which concentrates on analyzing the most promising moves, basing the expansion of the search tree on random sampling of the search space.

Pre-order traversal while duplicating nodes and edges can make a complete duplicate of a binary tree. It can also be used to make a prefix expression (Polish notation) from expression trees: traverse the expression tree pre-orderly.

Post-order traversal while deleting or freeing nodes and values can delete or free an entire binary tree. It can also generate a postfix representation of a binary tree.

All the above implementations require call stack space proportional to the height of the tree. In a poorly balanced tree, this can be considerable. We can remove the stack requirement by maintaining parent pointers in each node, or by threading the tree (next section).

Morris traversal is an implementation of in-order traversal that uses threading:

Also, listed below is pseudocode for a simple queue based level order traversal, and will require space proportional to the maximum number of nodes at a given depth. This can be as much as the total number of nodes / 2. A more space-efficient approach for this type of traversal can be implemented using an iterative deepening depth-first search.

While traversal is usually done for trees with a finite number of nodes (and hence finite depth and finite branching factor) it can also be done for infinite trees. This is of particular interest in functional programming (particularly with lazy evaluation), as infinite data structures can often be easily defined and worked with, though they are not (strictly) evaluated, as this would take infinite time. Some finite trees are too large to represent explicitly, such as the game tree for chess or go, and so it is useful to analyze them as if they were infinite.

A basic requirement for traversal is to visit every node. For infinite trees, simple algorithms often fail this. For example, given a binary tree of infinite depth, a depth-first traversal will go down one side (by convention the left side) of the tree, never visiting the rest, and indeed if in-order or post-order will never visit any nodes, as it has not reached a leaf (and in fact never will). By contrast, a breadth-first (level-order) traversal will traverse a binary tree of infinite depth without problem, and indeed will traverse any tree with bounded branching factor.

On the other hand, given a tree of depth 2, where the root node has infinitely many children, and each of these children has two children, a depth-first traversal will visit all nodes, as once it exhausts the grandchildren (children of children of one node), it will move on to the next (assuming it is not post-order, in which case it never reaches the root). By contrast, a breadth-first traversal will never reach the grandchildren, as it seeks to exhaust the children first.

A more sophisticated analysis of running time can be given via infinite ordinal numbers; for example, the breadth-first traversal of the depth 2 tree above will take ?·2 steps: ? for the first level, and then another ? for the second level.

Concretely, given the infinitely branching tree of infinite depth, label the root node

the children of the root node

and so on. The nodes are thus in a one-to-one correspondence with finite (possibly empty) sequences of positive numbers, which are countable and can be placed in order first by sum of entries, and then by lexicographic order within a given sum (only finitely many sequences sum to a given value, so all entries are reached – formally there are a finite number of compositions of a given natural number, specifically 2n-1compositions of n = 1;), which gives a traversal. Explicitly:

This can be interpreted as mapping the infinite depth binary tree onto this tree and then applying breadth-first traversal: replace the "down" edges connecting a parent node to its second and later children with "right" edges from the 1st child to the 2nd child, 2nd child to third child, etc. Thus at each step one can either go down (append a (,1) to the end) or go right (add 1 to the last number) (except the root, which is extra and can only go down), which shows the correspondence between the infinite binary tree and the above numbering; the sum of the entries (minus 1) corresponds to the distance from the root, which agrees with the 2n-1 nodes at depth n-1 in the infinite binary tree (2 corresponds to binary).