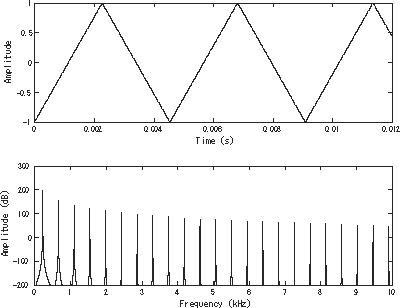 A bandlimited triangle wave pictured in the time domain (top) and frequency domain (bottom). The fundamental is at 220 Hz (A3).

A triangle wave is a non-sinusoidal waveform named for its triangular shape. It is a periodic, piecewise linear, continuous real function.

Like a square wave, the triangle wave contains only odd harmonics, due to its odd symmetry. However, the higher harmonics roll off much faster than in a square wave (proportional to the inverse square of the harmonic number as opposed to just the inverse).

Animation of the additive synthesis of a triangle wave with an increasing number of harmonics. See Fourier Analysis for a mathematical description.

It is possible to approximate a triangle wave with additive synthesis by adding odd harmonics of the fundamental, multiplying every (4n−1)th harmonic by −1 (or changing its phase by π), and rolling off the harmonics by the inverse square of their relative frequency to the fundamental.

This infinite Fourier series converges to the triangle wave:

Another definition of the triangle wave, with range from -1 to 1 and period 2a is:

represent the floor function of n.

Also, the triangle wave can be the absolute value of the sawtooth wave:

The triangle wave can also be expressed as the integral of the square wave:

A simple equation with a period of 4, with

. As this only uses the modulo operation and absolute value, this can be used to simply implement a triangle wave on hardware electronics with less CPU power:

or, a more complex and complete version of the above equation with a period of 2π and starting with

In terms of sine and arcsine with period p and amplitude a: