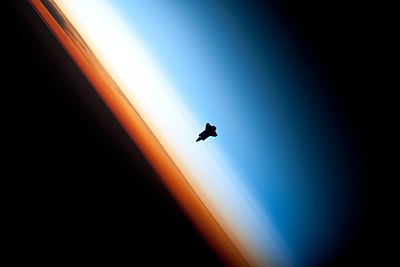 Space Shuttle Endeavour sillouetted against the atmosphere. The orange layer is the troposphere, the white layer is the stratosphere and the blue layer the mesosphere.[1] (The shuttle is actually orbiting at an altitude of more than 200 miles, far above all three layers.)

Earth atmosphere diagram showing the exosphere and other layers. The layers are to scale. From Earth's surface to the top of the stratosphere (50km) is just under 1% of Earth's radius.

The word troposphere derives from the Greek: tropos{{#invoke:Category handler|main}} for "change" reflecting the fact that turbulent mixing plays an important role in the troposphere's structure and behaviour. Most of the phenomena we associate with day-to-day weather occur in the troposphere.[3]

A view of Earth's troposphere from an airplane. 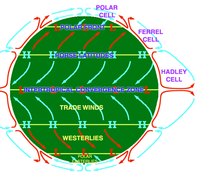 Since temperature in principle also depends on altitude, one needs a second equation to determine the pressure as a function of height, as discussed in the next section.*

File:Troposphere Temperature Trend1.jpg
This image shows the temperature trend in the Middle Troposphere as measured by a series of satellite-based instruments between January 1979 and December 2005. The middle troposphere is centered around 5 kilometers above the surface. Oranges and yellows dominate the troposphere image, indicating that the air nearest the Earth’s surface warmed during the period.Source: [1]

, is called the environmental lapse rate (ELR). The ELR is nothing more than the difference in temperature between the surface and the tropopause divided by the height. The reason for this temperature difference is that most absorption of the sun's energy occurs at the ground which then heats the lower levels of the atmosphere, and the radiation of heat occurs at the top of the atmosphere cooling the earth, this process maintaining the overall heat balance of the earth.

As parcels of air in the atmosphere rise and fall, they also undergo changes in temperature for reasons described below. The rate of change of the temperature in the parcel may be less than or more than the ELR. When a parcel of air rises, it expands, because the pressure is lower at higher altitudes. As the air parcel expands, it pushes on the air around it, doing work; but generally it does not gain heat in exchange from its environment, because its thermal conductivity is low (such a process is called adiabatic). Since the parcel does work and gains no heat, it loses energy, and so its temperature decreases. (The reverse, of course, will be true for a sinking parcel of air.) [3]

Since the heat exchanged

is related to the entropy change

, the equation governing the temperature as a function of height for a thoroughly mixed atmosphere is

where S is the entropy. The rate at which temperature decreases with height under such conditions is called the adiabatic lapse rate.

For dry air, which is approximately an ideal gas, we can proceed further. The adiabatic equation for an ideal gas is [5]

is the heat capacity ratio (

=7/5, for air). Combining with the equation for the pressure, one arrives at the dry adiabatic lapse rate,[6]

If the air contains water vapor, then cooling of the air can cause the water to condense, and the behavior is no longer that of an ideal gas. If the air is at the saturated vapor pressure, then the rate at which temperature drops with height is called the saturated adiabatic lapse rate. More generally, the actual rate at which the temperature drops with altitude is called the environmental lapse rate. In the troposphere, the average environmental lapse rate is a drop of about 6.5 °C for every 1 km (1,000 meters) in increased height.[3]

The environmental lapse rate (the actual rate at which temperature drops with height,

) is not usually equal to the adiabatic lapse rate (or correspondingly,

). If the upper air is warmer than predicted by the adiabatic lapse rate (

The tropopause is the boundary region between the troposphere and the stratosphere.

The flow of the atmosphere generally moves in a west to east direction. This, however, can often become interrupted, creating a more north to south or south to north flow. These scenarios are often described in meteorology as zonal or meridional. These terms, however, tend to be used in reference to localised areas of atmosphere (at a synoptic scale). A fuller explanation of the flow of atmosphere around the Earth as a whole can be found in the three-cell model.

Meridional Flow pattern of October 23, 2003. Note the amplified troughs and ridges in this 500 hPa height pattern.

When the zonal flow buckles, the atmosphere can flow in a more longitudinal (or meridional) direction, and thus the term "meridional flow" arises. Meridional flow patterns feature strong, amplified troughs and ridges, with more north-south flow in the general pattern than west-to-east flow.[8]

The three cells model attempts to describe the actual flow of the Earth's atmosphere as a whole. It divides the Earth into the tropical (Hadley cell), mid latitude (Ferrel cell), and polar (polar cell) regions, dealing with energy flow and global circulation. Its fundamental principle is that of balance - the energy that the Earth absorbs from the sun each year is equal to that which it loses back into space, but this however is not a balance precisely maintained in each latitude due to the varying strength of the sun in each "cell" resulting from the tilt of the Earth's axis in relation to its orbit. It demonstrates that a pattern emerges to mirror that of the ocean - the tropics do not continue to get warmer because the atmosphere transports warm air poleward and cold air equatorward, the effect of which appears to be that of heat and moisture distribution around the planet.[9]

Forcing is a term used by meteorologists to describe the situation where a change or an event in one part of the atmosphere causes a strengthening change in another part of the atmosphere. It is usually used to describe connections between upper, middle or lower levels (such as upper-level divergence causing lower level convergence in cyclone formation), but can sometimes also be used to describe such connections over distance rather than height alone. In some respects, teleconnections could be considered a type of forcing.

An area of convergence is one in which the total mass of air is increasing with time, resulting in an increase in pressure at locations below the convergence level (recall that atmospheric pressure is just the total weight of air above a given point). Divergence is the opposite of convergence - an area where the total mass of air is decreasing with time, resulting in falling pressure in regions below the area of divergence. Where divergence is occurring in the upper atmosphere, there will be air coming in to try to balance the net loss of mass (this is called the principle of mass conservation), and there is a resulting upward motion (positive vertical velocity). Another way to state this is to say that regions of upper air divergence are conducive to lower level convergence, cyclone formation, and positive vertical velocity. Therefore, identifying regions of upper air divergence is an important step in forecasting the formation of a surface low pressure area.