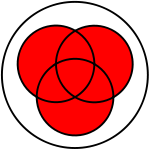 In set theory, the union (denoted by ∪) of a collection of sets is the set of all distinct elements in the collection.[1] It is one of the fundamental operations through which sets can be combined and related to each other.

The union of two sets A and B is the collection of points which are in A or in B or in both A and B. In symbols,

If we are then to refer to a single element by the variable "x", then we can say that x is a member of the union if it is an element present in set A or in set B, or both.

Binary union is an associative operation; that is,

The operations can be performed in any order, and the parentheses may be omitted without ambiguity (i.e., either of the above can be expressed equivalently as A ∪ B ∪ C). Similarly, union is commutative, so the sets can be written in any order.

The empty set is an identity element for the operation of union. That is, A ∪ ∅ = A, for any set A.

These facts follow from analogous facts about logical disjunction.

In mathematics a finite union means any union carried out on a finite number of sets: it doesn't imply that the union set is a finite set.

That this union of M is a set no matter how large a set M itself might be, is the content of the axiom of union in axiomatic set theory.

The notation for the general concept can vary considerably. For a finite union of sets

, the last of which refers to the union of the collection

where I is an index set and

is a set for every

. In the case that the index set I is the set of natural numbers, one uses a notation

analogous to that of the infinite series. When formatting is difficult, this can also be written "A1 ∪ A2 ∪ A3 ∪ ···". (This last example, a union of countably many sets, is very common in analysis; for an example see the article on σ-algebras.)

Whenever the symbol "∪" is placed before other symbols instead of between them, it is of a larger size.

Intersection distributes over union, in the sense that

Within a given universal set, union can be written in terms of the operations of intersection and complement as

where the superscript C denotes the complement with respect to the universal set.