Illustration of a unit circle. The variable t is an angle measure.

In mathematics, a unit circle is a circle with a radius of one. Frequently, especially in trigonometry, the unit circle is the circle of radius one centered at the origin (0, 0) in the Cartesian coordinate system in the Euclidean plane. The unit circle is often denoted S1; the generalization to higher dimensions is the unit sphere.

If (x, y) is a point on the unit circle's circumference, then |x| and |y| are the lengths of the legs of a right triangle whose hypotenuse has length 1. Thus, by the Pythagorean theorem, x and y satisfy the equation

One may also use other notions of "distance" to define other "unit circles", such as the Riemannian circle; see the article on mathematical norms for additional examples.

In the complex plane

for all t. This relation is Euler's formula. In quantum mechanics, this is referred to as phase factor.

Trigonometric functions on the unit circle 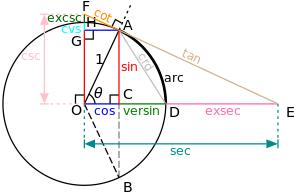 All of the trigonometric functions of the angle θ (theta) can be constructed geometrically in terms of a unit circle centered at O.

Sine function on unit circle (top) and its graph (bottom)

The trigonometric functions cosine and sine of angle t (t for θ, theta) may be defined on the unit circle as follows. If (x, y) is a point of the unit circle, and if the ray from the origin (0, 0) to (x, y) makes an angle t from the positive x-axis, (where counterclockwise turning is positive), then

The unit circle also demonstrates that sine and cosine are periodic functions, with the identities

for any integer k.

Triangles constructed on the unit circle can also be used to illustrate the periodicity of the trigonometric functions. First, construct a radius OA from the origin to a point P(x1,y1) on the unit circle such that an angle t with 0 < t < π/2 is formed with the positive arm of the x-axis. Now consider a point Q(x1,0) and line segments PQ

OQ. The result is a right triangle ΔOPQ with ∠QOP = t. Because PQ has length y1, OQ length x1, and OA length 1, sin(t) = y1 and cos(t) = x1. Having established these equivalences, take another radius OR from the origin to a point R(−x1,y1) on the circle such that the same angle t is formed with the negative arm of the x-axis. Now consider a point S(−x1,0) and line segments RS

When working with right triangles, sine, cosine, and other trigonometric functions only make sense for angle measures more than zero and less than π/2. However, when defined with the unit circle, these functions produce meaningful values for any real-valued angle measure – even those greater than 2π. In fact, all six standard trigonometric functions – sine, cosine, tangent, cotangent, secant, and cosecant, as well as archaic functions like versine and exsecant – can be defined geometrically in terms of a unit circle, as shown at right.

Using the unit circle, the values of any trigonometric function for many angles other than those labeled can be calculated without the use of a calculator by using the Sum and Difference Formulas. 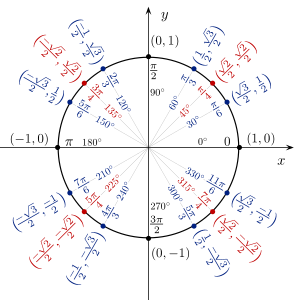 gives a counterclockwise rotation by θ. This group has important applications in mathematics and science.Template:Such as?

is a unit circle. It is a simplest case so it is widely used in study of dynamical systems.