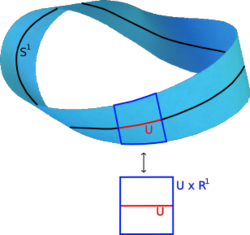 The Möbius strip is a line bundle over the 1-sphere S1. Locally around every point in S1, it looks like U × R (where U is an open arc including the point), but the total bundle is different from S1 × R (which is a cylinder instead).

The simplest example is the case that the family of vector spaces is constant, i.e., there is a fixed vector space V such that V(x) = V for all x in X: in this case there is a copy of V for each x in X and these copies fit together to form the vector bundle X × V over X. Such vector bundles are said to be trivial. A more complicated (and prototypical) class of examples are the tangent bundles of smooth (or differentiable) manifolds: to every point of such a manifold we attach the tangent space to the manifold at that point. Tangent bundles are not, in general, trivial bundles: for example, the tangent bundle of the sphere is non-trivial by the hairy ball theorem. In general, a manifold is said to be parallelizable if and only if its tangent bundle is trivial.

A real vector bundle consists of:

where the following compatibility condition is satisfied: for every point in X, there is an open neighborhood U, a natural number k, and a homeomorphism

Every fiber π−1({x}) is a finite-dimensional real vector space and hence has a dimension kx. The local trivializations show that the function x Template:Mapsto kx is locally constant, and is therefore constant on each connected component of X. If kx is equal to a constant k on all of X, then k is called the rank of the vector bundle, and E is said to be a vector bundle of rank k. Often the definition of a vector bundle includes that the rank is well defined, so that kx is constant. Vector bundles of rank 1 are called line bundles, while those of rank 2 are less commonly called plane bundles.

The Cartesian product X × Rk , equipped with the projection X × Rk → X, is called the trivial bundle of rank k over X.

Given a vector bundle E → X of rank k, and a pair of neighborhoods U and V over which the bundle trivializes via

is well-defined on the overlap, and satisfies

These are called the transition functions (or the coordinate transformations) of the vector bundle.

for all U, V, W over which the bundle trivializes. Thus the data (E, X, π, Rk) defines a fiber bundle; the additional data of the gUV specifies a GL(k) structure group in which the action on the fiber is the standard action of GL(k).

Conversely, given a fiber bundle (E, X, π, Rk) with a GL(k) cocycle acting in the standard way on the fiber Rk, there is associated a vector bundle. This is sometimes taken as the definition of a vector bundle.

Note that g is determined by f (because π1 is surjective), and f is then said to cover g.

(Note that this category is not abelian; the kernel of a morphism of vector bundles is in general not a vector bundle in any natural way.)

The map associating a normal to each point on a surface can be thought of as a section. The surface is the space X, and at each point x there is a vector in the vector space attached at x.

Given a vector bundle π : E → X and an open subset U of X, we can consider sections of π on U, i.e. continuous functions s : U → E where the composite π∘s is such that (π∘s)(u) = u for all u in U. Essentially, a section assigns to every point of U a vector from the attached vector space, in a continuous manner. As an example, sections of the tangent bundle of a differential manifold are nothing but vector fields on that manifold.

Let F(U) be the set of all sections on U. F(U) always contains at least one element, namely the zero section: the function s that maps every element x of U to the zero element of the vector space π−1({x}). With the pointwise addition and scalar multiplication of sections, F(U) becomes itself a real vector space. The collection of these vector spaces is a sheaf of vector spaces on X.

Note that a rank n vector bundle is trivial if and only if it has n linearly independent global sections.

Most operations on vector spaces can be extended to vector bundles by performing the vector space operation fiberwise.

For example, if E is a vector bundle over X, then there is a bundle E* over X, called the dual bundle, whose fiber at x∈X is the dual vector space (Ex)*. Formally E* can be defined as the set of pairs (x, φ), where x ∈ X and φ ∈ (Ex)*. The dual bundle is locally trivial because the dual space of the inverse of a local trivialization of E is a local trivialization of E*: the key point here is that the operation of taking the dual vector space is functorial.

There are many functorial operations which can be performed on pairs of vector spaces (over the same field), and these extend straightforwardly to pairs of vector bundles E, F on X (over the given field). A few examples follow.

Each of these operations is a particular example of a general feature of bundles: that many operations that can be performed on the category of vector spaces can also be performed on the category of vector bundles in a functorial manner. This is made precise in the language of smooth functors. An operation of a different nature is the pullback bundle construction. Given a vector bundle E → Y and a continuous map f : X → Y one can "pull back" E to a vector bundle f*E over X. The fiber over a point x ∈ X is essentially just the fiber over f(x) ∈ Y. Hence, Whitney summing E ⊕ F can be defined as the pullback bundle of the diagonal map from X to X x X where the bundle over X x X is E x F.

If instead of a finite-dimensional vector space, if the fiber F is taken to be a Banach space then a Banach bundle is obtained.[1] Specifically, one must require that the local trivializations are Banach space isomorphisms (rather than just linear isomorphisms) on each of the fibers and that, furthermore, the transitions

are continuous mappings of Banach manifolds. In the corresponding theory for Cp bundles, all mappings are required to be Cp.

A vector bundle (E, p, M) is smooth, if E and M are smooth manifolds, p : E → M is a smooth map, and the local trivializations are diffeomorphisms. Depending on the required degree of smoothness, there are different corresponding notions of Cp bundles, infinitely differentiable C∞-bundles and real analytic Cω-bundles. In this section we will concentrate on C∞-bundles. The most important example of a C∞-vector bundle is the tangent bundle (TM,πTM,M) of a C∞-manifold M.

The C∞-vector bundles (E, p, M) have a very important property not shared by more general C∞-fibre bundles. Namely, the tangent space Tv(Ex) at any v ∈ Ex can be naturally identified with the fibre Ex itself. This identification is obtained through the vertical lift vlv: Ex → Tv(Ex), defined as

The slit vector bundle E/0, obtained from (E, p, M) by removing the zero section 0 ⊂ E, carries a natural vector field Vv := vlvv, known as the canonical vector field. More formally, V is a smooth section of (TE, πTE, E), and it can also be defined as the infinitesimal generator of the Lie-group action

The K-theory group, K(X), of a manifold is defined as the abelian group generated by isomorphism classes [E] of complex vector bundles modulo the relation that whenever we have an exact sequence

in topological K-theory. KO-theory is a version of this construction which considers real vector bundles. K-theory with compact supports can also be defined, as well as higher K-theory groups.

The famous periodicity theorem of Raoul Bott asserts that the K-theory of any space X is isomorphic to that of the S2X, the double suspension of X.

In algebraic geometry, one considers the K-theory groups consisting of coherent sheaves on a scheme X, as well as the K-theory groups of vector bundles on the scheme with the above equivalence relation. The two constructs are the same provided that the underlying scheme is smooth.