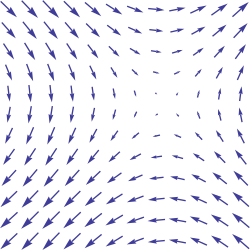 A portion of the vector field (sin y, sin x)

In coordinates, a vector field on a domain in n-dimensional Euclidean space can be represented as a vector-valued function that associates an n-tuple of real numbers to each point of the domain. This representation of a vector field depends on the coordinate system, and there is a well-defined transformation law in passing from one coordinate system to the other. Vector fields are often discussed on open subsets of Euclidean space, but also make sense on other subsets such as surfaces, where they associate an arrow tangent to the surface at each point (a tangent vector).

More generally, vector fields are defined on differentiable manifolds, which are spaces that look like Euclidean space on small scales, but may have more complicated structure on larger scales. In this setting, a vector field gives a tangent vector at each point of the manifold (that is, a section of the tangent bundle to the manifold). Vector fields are one kind of tensor field.

A vector field can be visualized as assigning a vector to individual points within an n-dimensional space.[1]

define the module of Ck-vector fields over the ring of Ck-functions.

In physics, a vector is additionally distinguished by how its coordinates change when one measures the same vector with respect to a different background coordinate system. The transformation properties of vectors distinguish a vector as a geometrically distinct entity from a simple list of scalars, or from a covector.

Thus, suppose that (x1,...,xn) is a choice of Cartesian coordinates, in terms of which the components of the vector V are

and suppose that (y1,...,yn) are n functions of the xi defining a different coordinate system. Then the components of the vector V in the new coordinates are required to satisfy the transformation law Template:NumBlk 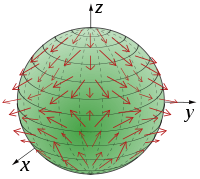 A vector field on a sphere

Given a differentiable manifold M, a vector field on M is an assignment of a tangent vector to each point in M.[2] More precisely, a vector field F is a mapping from M into the tangent bundle TM so that

is the identity mapping where p denotes the projection from TM to M. In other words, a vector field is a section of the tangent bundle.

The flow field around an airplane is a vector field in R3, here visualized by bubbles that follow the streamlines showing a wingtip vortex.

streaklines — as revealed in wind tunnels using smoke.
streamlines (or fieldlines)— as a line depicting the instantaneous field at a given time.
pathlines — showing the path that a given particle (of zero mass) would follow. 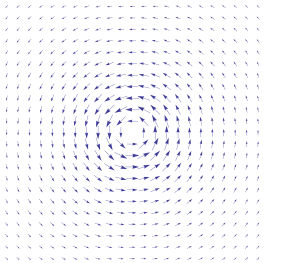 A vector field that has circulation about a point cannot be written as the gradient of a function.

Vector fields can be constructed out of scalar fields using the gradient operator (denoted by the del: ∇).[3]

The associated flow is called the gradient flow, and is used in the method of gradient descent.

where the angular brackets and comma: Template:Langle, Template:Rangle denotes the inner product of two vectors (strictly speaking - the integrand V(x) is a 1-form rather than a vector in the elementary sense).[4]

where O(n, R) is the orthogonal group. We say central fields are invariant under orthogonal transformations around 0.

The point 0 is called the center of the field.

Since orthogonal transformations are actually rotations and reflections, the invariance conditions mean that vectors of a central field are always directed towards, or away from, 0; this is an alternate (and simpler) definition. A central field is always a gradient field, since defining it on one semiaxis and integrating gives an antigradient.

The line integral is constructed analogously to the Riemann integral and it exists if the curve is rectifiable (has finite length) and the vector field is continuous.

Given a vector field V and a curve γ parametrized by [a, b] (where a and b are real) the line integral is defined as

{{#invoke:main|main}} The divergence of a vector field on Euclidean space is a function (or scalar field). In three-dimensions, the divergence is defined by

with the obvious generalization to arbitrary dimensions. The divergence at a point represents the degree to which a small volume around the point is a source or a sink for the vector flow, a result which is made precise by the divergence theorem.

The divergence can also be defined on a Riemannian manifold, that is, a manifold with a Riemannian metric that measures the length of vectors.

The curl measures the density of the angular momentum of the vector flow at a point, that is, the amount to which the flow circulates around a fixed axis. This intuitive description is made precise by Stokes' theorem.

Index of a vector field

The index of a vector field is a way of describing the behaviour of a vector field around an isolated zero (i.e. non-singular point) which can distinguish saddles from sources and sinks. Take a small sphere around the zero so that no other zeros are included. A map from this sphere to a unit sphere of dimensions

The index will be zero around any non singular point, it is +1 around sources and sinks and -1 around saddles. In two dimensions the index is equivalent to the winding number. For an ordinary sphere in three dimension space it can be shown that the index of any vector field on the sphere must be two, this leads to the hairy ball theorem which shows that every such vector field must have a zero. This theorem generalises to the Poincaré–Hopf theorem which relates the index to the Euler characteristic of the space. 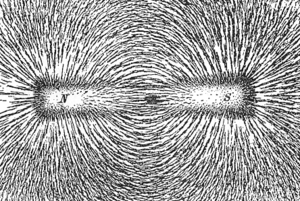 Vector fields arose originally in classical field theory in 19th century physics, specifically in magnetism. They were formalized by Michael Faraday, in his concept of lines of force, who emphasized that the field itself should be an object of study, which it has become throughout physics in the form of field theory.

In addition to the magnetic field, other phenomena that were modeled as vector fields by Faraday include the electrical field and light field.

{{#invoke:main|main}} Consider the flow of a fluid through a region of space. At any given time, any point of the fluid has a particular velocity associated with it; thus there is a vector field associated to any flow. The converse is also true: it is possible to associate a flow to a vector field having that vector field as its velocity.

Given a vector field V defined on S, one defines curves γ(t) on S such that for each t in an interval I

By the Picard–Lindelöf theorem, if V is Lipschitz continuous there is a unique C1-curve γx for each point x in S so that

The curves γx are called flow curves of the vector field V and partition S into equivalence classes. It is not always possible to extend the interval (−ε, +ε) to the whole real number line. The flow may for example reach the edge of S in a finite time. In two or three dimensions one can visualize the vector field as giving rise to a flow on S. If we drop a particle into this flow at a point p it will move along the curve γp in the flow depending on the initial point p. If p is a stationary point of V then the particle will remain at p.

Typical applications are streamline in fluid, geodesic flow, and one-parameter subgroups and the exponential map in Lie groups.

A vector field is complete if its flow curves exist for all time.[5] In particular, compactly supported vector fields on a manifold are complete. If X is a complete vector field on M, then the one-parameter group of diffeomorphisms generated by the flow along X exists for all time.

Difference between scalar and vector field

We see that while the scalar field remains the same, the vector field now looks different. The same holds even in the 1-dimensional case, as illustrated by the next example.

Consider the 1-dimensional Euclidean space R with its standard Euclidean coordinate x. Suppose we have a scalar field and a vector field which are both given in the x coordinate by the constant function 1,

Thus, we have a scalar field which has the value 1 everywhere and a vector field which attaches a vector in the x-direction with magnitude 1 unit of x to each point.

Now consider the coordinate ξ := 2x. If x changes one unit then ξ changes 2 units. Thus this vector field has a magnitude of 2 in units of ξ. Therefore, in the ξ coordinate the scalar field and the vector field are described by the functions