In physics, a wave vector (also spelled wavevector) is a vector which helps describe a wave. Like any vector, it has a magnitude and direction, both of which are important: Its magnitude is either the wavenumber or angular wavenumber of the wave (inversely proportional to the wavelength), and its direction is ordinarily the direction of wave propagation (but not always, see below).

In the context of special relativity the wave vector can also be defined as a four-vector. 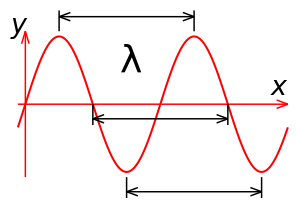 Wavelength of a sine wave, λ, can be measured between any two consecutive points with the same phase, such as between adjacent crests, or troughs, or adjacent zero crossings with the same direction of transit, as shown.

This wave travels in the +x direction with speed (more specifically, phase velocity)

In crystallography, the same waves are described using slightly different equations.[2] In one and three dimensions respectively:

The direction of k is discussed below.

Direction of the wave vector

However, when a wave travels through an anisotropic medium, such as light waves through an asymmetric crystal or sound waves through a sedimentary rock, the wave vector may not point exactly in the direction of wave propagation.[3][4]

{{#invoke:main|main}} In solid-state physics, the "wavevector" (also called k-vector) of an electron or hole in a crystal is the wavevector of its quantum-mechanical wavefunction. These electron waves are not ordinary sinusoidal waves, but they do have a kind of envelope function which is sinusoidal, and the wavevector is defined via that envelope wave, usually using the "physics definition". See Bloch wave for further details.[5]

A beam of coherent, monochromatic light can be characterized by the (null) wave 4-vector

which, when written out explicitly in its contravariant and covariant forms is

The wave 4-vector is related to the four-momentum as follows:

Taking the Lorentz transformation of the wave vector is one way to derive the relativistic Doppler effect. The Lorentz matrix is defined as

In the situation where light is being emitted by a fast moving source and one would like to know the frequency of light detected in an earth (lab) frame, we would apply the Lorentz transformation as follows. Note that the source is in a frame Ss and earth is in the observing frame, Sobs. Applying the lorentz transformation to the wave vector

and choosing just to look at the

As an example, to apply this to a situation where the source is moving directly away from the observer (