The 13 possible strict weak orderings on a set of three elements {a, b, c}. The only partially ordered sets are coloured, while totally ordered ones are in black. Two orderings are shown as connected by an edge if they differ by a single dichotomy.

There are several common ways of formalizing weak orderings, that are different from each other but cryptomorphic (interconvertable with no loss of information): they may be axiomatized as strict weak orderings (partially ordered sets in which incomparability is a transitive relation), as total preorders (transitive binary relations in which at least one of the two possible relations exists between every pair of elements), or as ordered partitions (partitions of the elements into disjoint subsets, together with a total order on the subsets). In many cases another representation called a preferential arrangement based on a utility function is also possible.

Weak orderings are counted by the ordered Bell numbers. They are used in computer science as part of partition refinement algorithms, and in the C++ Standard Library.

In horse racing, the use of photo finishes has eliminated some, but not all, ties or (as they are called in this context) dead heats, so the outcome of a horse race may be modeled by a weak ordering.[2] In an example from the Maryland Hunt Cup steeplechase in 2007, The Bruce was the clear winner, but two horses Bug River and Lear Charm tied for second place, with the remaining horses farther back; three horses did not finish.[3] In the weak ordering describing this outcome, The Bruce would be first, Bug River and Lear Charm would be ranked after The Bruce but before all the other horses that finished, and the three horses that did not finish would be placed last in the order but tied with each other.

Opinion polling in political elections provides an example of a type of ordering that resembles weak orderings, but is better modeled mathematically in other ways. In the results of a poll, one candidate may be clearly ahead of another, or the two candidates may be statistically tied, meaning not that their poll results are equal but rather that they are within the margin of error of each other. However, if candidate x is statistically tied with y, and y is statistically tied with z, it might still be possible for x to be clearly better than z, so being tied is not in this case a transitive relation. Because of this possibility, rankings of this type are better modeled as semiorders than as weak orderings.[4]

A strict weak ordering is a binary relation < on a set S that is a strict partial order (a transitive relation that is irreflexive, or equivalently,[5] that is asymmetric) in which the relation "neither a < b nor b < a" is transitive.[1]

The equivalence classes of this "incomparability relation" partition the elements of S, and are totally ordered by <. Conversely, any total order on a partition of S gives rise to a strict weak ordering in which x < y if and only if there exists sets A and B in the partition with x in A, y in B, and A < B in the total order.

As a non-example, consider the partial order in the set {a, b, c} defined by the relationship b < c. The pairs a,b and a,c are incomparable but b and c are related, so incomparability does not form an equivalence relation and this example is not a strict weak ordering.

A strict weak ordering has the following properties. For all x and y in S,

This list of properties is somewhat redundant, as asymmetry follows readily from irreflexivity and transitivity.

Transitivity of incomparability (together with transitivity) can also be stated in the following forms:

A total order is a total preorder which is antisymmetric, in other words, which is also a partial order. Total preorders are sometimes also called preference relations.

y whenever it is not the case that y < x. In the other direction, to define a strict weak ordering < from a total preorder

In a strict weak ordering, the equivalence classes of incomparability give a set partition, in which the sets inherit a total ordering from their elements, giving rise to an ordered partition. In the other direction, any ordered partition gives rise to a strict weak ordering in which two elements are incomparable when they belong to the same set in the partition, and otherwise inherit the order of the sets that contain them.

b if and only if f(a) ≤ f(b), and the associated equivalence by setting a

The relations do not change when f is replaced by g o f (composite function), where g is a strictly increasing real-valued function defined on at least the range of f. Thus e.g. a utility function defines a preference relation. In this context, weak orderings are also known as preferential arrangements.[9]

If X is finite or countable, every weak order on X can be represented by a function in this way.[10] However, there exist strict weak orders that have no corresponding real function. For example, there is no such function for the lexicographic order on Rn. Thus, while in most preference relation models the relation defines a utility function up to order-preserving transformations, there is no such function for lexicographic preferences.

f(b), and the associated equivalence by setting a

All weak orders on a finite set

{{#invoke:main|main}} The number of distinct weak orders (represented either as strict weak orders or as total preorders) on an n-element set is given by the following sequence (sequence A000670 in OEIS): Template:Number of relations

These numbers are also called the Fubini numbers or ordered Bell numbers.

For example, for a set of three labeled items, there is one weak order in which all three items are tied. There are three ways of partitioning the items into one singleton set and one group of two tied items, and each of these partitions gives two weak orders (one in which the singleton is smaller than the group of two, and one in which this ordering is reversed), giving six weak orders of this type. And there is a single way of partitioning the set into three singletons, which can be totally ordered in six different ways. Thus, altogether, there are 13 different weak orders on three items. 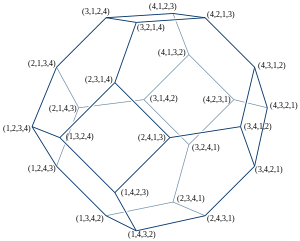 For instance, for n = 3, the permutohedron on three elements is just a regular hexagon. The face lattice of the hexagon (again, including the hexagon itself as a face, but not including the empty set) has thirteen elements: one hexagon, six edges, and six vertices, corresponding to the one completely tied weak ordering, six weak orderings with one tie, and six total orderings. The graph of moves on these 13 weak orderings is shown in the figure.

As mentioned above, weak orders have applications in utility theory.[10] In linear programming and other types of combinatorial optimization problem, the prioritization of solutions or of bases is often given by a weak order, determined by a real-valued objective function; the phenomenon of ties in these orderings is called "degeneracy", and several types of tie-breaking rule have been used to refine this weak ordering into a total ordering in order to prevent problems caused by degeneracy.[15]

Weak orders have also been used in computer science, in partition refinement based algorithms for lexicographic breadth-first search and lexicographic topological ordering. In these algorithms, a weak ordering on the vertices of a graph (represented as a family of sets that partition the vertices, together with a doubly linked list providing a total order on the sets) is gradually refined over the course of the algorithm, eventually producing a total ordering that is the output of the algorithm.[16]

In the Standard Library for the C++ programming language, the set and multiset data types sort their input by a comparison function that is specified at the time of template instantiation, and that is assumed to implement a strict weak ordering.[17]