Humpback whales are well known for their songs

Whale sounds are used by whales for different kinds of communication.[1]

The mechanisms used to produce sound vary from one family of cetaceans to another. Marine mammals, such as whales, dolphins, and porpoises, are much more dependent on sound for communication and sensation than are land mammals, because other senses are of limited effectiveness in water. Sight is less effective for marine mammals because of the way particulates in the ocean scatter light. Smell is also limited, as molecules diffuse more slowly in water than in air, which makes smelling less effective. However, the speed of sound is roughly four times greater in water than in the atmosphere at sea level. Because sea mammals are so dependent on hearing to communicate and feed, environmentalists and cetologists are concerned that they are being harmed by the increased ambient noise in the world's oceans caused by ships, sonar and marine seismic surveys.[2]

The word "song" is used to describe the pattern of regular and predictable sounds made by some species of whales, notably the humpback whale. This is included with or in comparison with music, and male humpback whales have been described as "inveterate composers" of songs that are "'strikingly similar' to human musical traditions".[3] It has been suggested that humpback songs communicate male fitness to female whales.[4] The click sounds made by sperm whales and dolphins are not strictly song, but the clicking sequences have been suggested to be individualized rhythmic sequences that communicate the identity of a single whale to other whales in its group and allows the groups to coordinate foraging activities.[5]

Humans produce sound by expelling air through the larynx. The vocal cords within the larynx open and close as necessary to separate the stream of air into discrete pockets of air.[6] These pockets are shaped by the throat, tongue, and lips into the desired sound, allowing humans to speak.

Cetacean sound production differs markedly from this mechanism. The precise mechanism differs in the two major suborders of cetaceans: the Odontoceti (toothed whales—including dolphins) and the Mysticeti (baleen whales—including the largest whales, such as the blue whale).

Process in a dolphin echolocation: in green the sounds generated by the dolphin, in red from the fish.

Idealized dolphin head showing the regions involved in sound production. This image was redrawn from Cranford (2000).

Odontocetes produce rapid bursts of high-frequency clicks that are thought to be primarily for echolocation. Specialized organs in an odontocete produce collections of clicks and buzzes at frequencies from 0.2 to 150 kHz to obtain sonic information about its environment. Lower frequencies are used for distance echolocation, due to the fact that shorter wavelengths do not travel as far as longer wavelengths underwater. Higher frequencies are more effective at shorter distances, and can reveal more detailed information about a target. Echoes from clicks convey, not only the distance to the target, but also the size, shape, speed, and vector of its movement. Additionally, echolocation allows the odontocete to easily discern the difference between objects that are different in material composition, even if visually identical, by their different densities. Individuals also appear to be able to isolate their own echoes during pod feeding activity without interference from other pod members' echolocations.[7]

Whistles are used for communication, and four- to six-month-old calves develop unique sounds that they use most frequently throughout their lives. Such "signature whistles" are distinctive to the individual and may serve as a form of identification among other odontocetes.[7] Though a large pod of dolphins will produce a wide range of different noises, very little is known about the meaning of the sound. Frankel quotes one researcher who says listening to a school of odontocetes is like listening to a group of children at a school playground.[8]

The French name for phonic lips, museau de singe, translates literally as "monkey's muzzle," which the phonic lip structure is supposed to resemble.[10] New cranial analysis using computed axial and single photon emission computed tomography scans in 2004 showed, at least in the case of bottlenose dolphins, that air might be supplied to the nasal complex from the lungs by the palatopharyngeal sphincter, enabling the sound creation process to continue for as long as the dolphin is able to hold its breath.[11]

Baleen whales (formally called mysticetes) do not have phonic lip structure. Instead, they have a larynx that appears to play a role in sound production, but it lacks vocal cords, and scientists remain uncertain as to the exact mechanism.{{ safesubst:#invoke:Unsubst||date=__DATE__ |$B= {{#invoke:Category handler|main}}{{#invoke:Category handler|main}}[citation needed] }} The process, however, cannot be completely analogous to humans, because whales do not have to exhale in order to produce sound. It is likely that they recycle air around the body for this purpose. Cranial sinuses may also be used to create the sounds, but again researchers are currently unclear how.

The frequency of baleen whale sounds ranges from 10 Hz to 31 kHz.[12] A list of typical levels is shown in the table below.

The question of whether whales sometimes sing purely for aesthetic enjoyment, personal satisfaction, or 'for art's sake', is "an untestable question in scientific terms".[14]

Song of the Humpback Whale 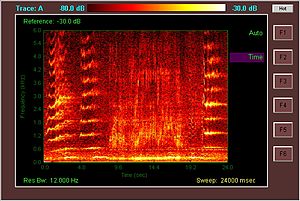 Two groups of whales, the humpback whale and the subspecies of blue whale found in the Indian Ocean, are known to produce a series of repetitious sounds at varying frequencies known as whale song. Marine biologist Philip Clapham describes the song as "probably the most complex in the animal kingdom."[15]

Interest in whale song was aroused by researchers Roger Payne and Scott McVay after the songs were brought to their attention by a Bermudian named Frank Watlington who was working for the US government at the SOFAR station listening for Russian submarines with underwater hydrophones off the coast of the island.[16]

The songs follow a distinct hierarchical structure. The base units of the song (sometimes loosely called the "notes") are single uninterrupted emissions of sound that last up to a few seconds. These sounds vary in frequency from 20 Hz to upward of 24 kHz (the typical human range of hearing is 20 Hz to 20 kHz). The units may be frequency modulated (i.e., the pitch of the sound may go up, down, or stay the same during the note) or amplitude modulated (get louder or quieter). However the adjustment of bandwidth on a spectrogram representation of the song reveals the essentially pulsed nature of the FM sounds.

A collection of four or six units is known as a sub-phrase, lasting perhaps ten seconds (see also phrase (music)).[8] A collection of two sub-phrases is a phrase. A whale will typically repeat the same phrase over and over for two to four minutes. This is known as a theme. A collection of themes is known as a song.[8] The whale will repeat the same song, which last up to 30 or so minutes, over and over again over the course of hours or even days.[8] This "Russian doll" hierarchy of sounds has captured the imagination of scientists.Template:Weasel-inline{{ safesubst:#invoke:Unsubst||date=__DATE__ |$B= {{#invoke:Category handler|main}}{{#invoke:Category handler|main}}[citation needed] }}

All the whales in an area sing virtually the same song at any point in time and the song is constantly and slowly evolving over time.{{ safesubst:#invoke:Unsubst||date=__DATE__ |$B= {{#invoke:Category handler|main}}{{#invoke:Category handler|main}}[citation needed] }} For example, over the course of a month a particular unit that started as an upsweep (increasing in frequency) might slowly flatten to become a constant note.[8] Another unit may get steadily louder. The pace of evolution of a whale's song also changes—some years the song may change quite rapidly, whereas in other years little variation may be recorded.[8] 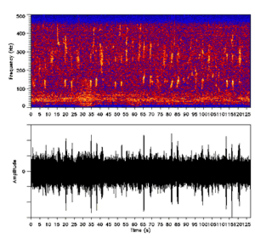 Whales occupying the same geographical areas (which can be as large as entire ocean basins) tend to sing similar songs, with only slight variations. Whales from non-overlapping regions sing entirely different songs.[8]

Some scientists have proposed that humpback whale songs may serve an echolocative purpose,[18] but this has been subject to disagreement.[19]

Humpback whales have also been found to make a range of other social sounds to communicate such as "grunts", "groans", "thwops", "snorts" and "barks".[20]

Most baleen whales make sounds at about 15–20 hertz.{{ safesubst:#invoke:Unsubst||date=__DATE__ |$B= {{#invoke:Category handler|main}}{{#invoke:Category handler|main}}[citation needed] }} However, a team of marine biologists, led by Mary Ann Daher of the Woods Hole Oceanographic Institution, reported in New Scientist in December 2004 that they had been tracking a whale in the North Pacific for 12 years that was "singing" at 52 Hz.[21] The scientists are unable to explain this dramatic difference from the norm; however, they believe the whale is baleen[22] and unlikely to be a new species,[21] suggesting that currently known species may have a wider vocal range than previously thought.

In 2009, researchers found that blue whale song has been deepening in its tonal frequency since the 1960s.[23] While noise pollution has increased ambient ocean noise by over 12 decibels since the mid-20th century, researcher Mark McDonald indicated that higher pitches would be expected if the whales were straining to be heard.[24]

Most other whales and dolphins produce sounds of varying degrees of complexity. Of particular interest is the Beluga (the "sea canary") which produces an immense variety of whistles, clicks and pulses.[25][26] 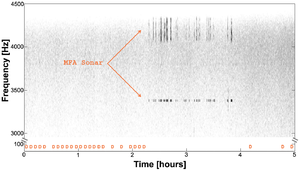 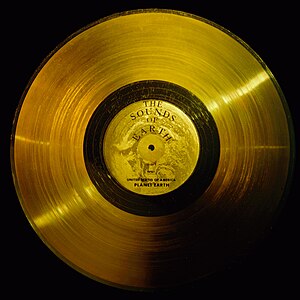 Researchers use hydrophones (often adapted from their original military use in tracking submarines) to ascertain the exact location of the origin of whale noises.{{ safesubst:#invoke:Unsubst||date=__DATE__ |$B= {{#invoke:Category handler|main}}{{#invoke:Category handler|main}}[citation needed] }} Their methods also allow them to detect how far through an ocean a sound travels.{{ safesubst:#invoke:Unsubst||date=__DATE__ |$B= {{#invoke:Category handler|main}}{{#invoke:Category handler|main}}[citation needed] }} Research by Dr. Christopher Clark of Cornell University conducted using military data showed that whale noises travel for thousands of kilometres.[27] As well as providing information about song production, the data allows researchers to follow the migratory path of whales throughout the "singing" (mating) season. An important finding is that whales, in a process called the Lombard effect, adjust their song to compensate for background noise pollution.[28] Moreover, there is evidence that blue whales stop producing foraging D calls once a mid-frequency sonar is activated, even though the sonar frequency range (1–8 kHz) far exceeds their sound production range (25–100 Hz).[2]

Prior to the introduction of human noise production, Clark says the noises may have travelled right from one side of an ocean to the other, agreeing with a thirty-year-old concept blaming large-scale shipping.[27] His research indicates that ambient noise from boats is doubling with each decade.[27] This has the effect of reducing the range at which whale noises can be heard. Environmentalists fear that such boat activity is putting undue stress on the animals as well as making it difficult to find a mate.[27]

In the past decade, many effective automated methods, such as signal processing, data mining, and machine learning techniques have been developed to detect and classify whale vocalizations.[29][30]