The term winding number may also refer to the rotation number of an iterated map. 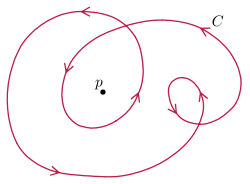 This curve has winding number two around the point p.

Winding numbers are fundamental objects of study in algebraic topology, and they play an important role in vector calculus, complex analysis, geometric topology, differential geometry, and physics, including string theory.

An object traveling along the red curve makes two counterclockwise turns around the person at the origin.

Suppose we are given a closed, oriented curve in the xy plane. We can imagine the curve as the path of motion of some object, with the orientation indicating the direction in which the object moves. Then the winding number of the curve is equal to the total number of counterclockwise turns that the object makes around the origin.

A curve in the xy plane can be defined by parametric equations:

If we think of the parameter t as time, then these equations specify the motion of an object in the plane between t = 0 and t = 1. The path of this motion is a curve as long as the functions x(t) and y(t) are continuous. This curve is closed as long as the position of the object is the same at t = 0 and t = 1.

We can define the winding number of such a curve using the polar coordinate system. Assuming the curve does not pass through the origin, we can rewrite the parametric equations in polar form:

The functions r(t) and θ(t) are required to be continuous, with r > 0. Because the initial and final positions are the same, θ(0) and θ(1) must differ by an integer multiple of 2π. This integer is the winding number:

This defines the winding number of a curve around the origin in the xy plane. By translating the coordinate system, we can extend this definition to include winding numbers around any point p.

Winding number is often defined in different ways in various parts of mathematics. All of the definitions below are equivalent to the one given above:

By the fundamental theorem of calculus, the total change in θ is equal to the integral of dθ. We can therefore express the winding number of a differentiable curve as a line integral:

In complex analysis, the winding number of a closed curve C in the complex plane can be expressed in terms of the complex coordinate z = x + iy. Specifically, if we write z = reiθ, then

More generally, the winding number of C around any complex number a is given by

This is a special case of the famous Cauchy integral formula. Winding numbers play a very important role throughout complex analysis (c.f. the statement of the residue theorem).

In topology, the winding number is an alternate term for the degree of a continuous mapping. In physics, winding numbers are frequently called topological quantum numbers. In both cases, the same concept applies.

The above example of a curve winding around a point has a simple topological interpretation. The complement of a point in the plane is homotopy equivalent to the circle, such that maps from the circle to itself are really all that need to be considered. It can be shown that each such map can be continuously deformed to (is homotopic to) one of the standard maps

Maps from the 3-sphere to itself are also classified by an integer which is also called the winding number or sometimes Pontryagin index. 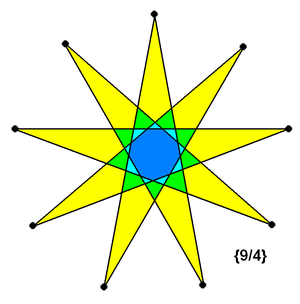 The boundary of the regular Enneagram {9/4} winds around its centre 4 times, so it has a density of 4.

In polygons, the winding number is referred to as the polygon density. For convex polygons, and more generally simple polygons (not self-intersecting), the density is 1, by the Jordan curve theorem. By contrast, for a regular star polygon {p/q}, the density is q.

This is only defined for immersed paths (i.e., for differentiable paths with nowhere vanishing derivatives), and is the degree of the tangential Gauss map.

This is called the turning number, and can be computed as the total curvature divided by 2π.