X-ray reflectivity sometimes known as X-ray specular reflectivity, X-ray reflectometry, or XRR, is a surface-sensitive analytical technique used in chemistry, physics, and materials science to characterize surfaces, thin films and multilayers.[1][2][3][4] It is related to the complementary techniques of neutron reflectometry and ellipsometry. 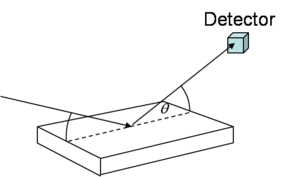 The basic idea behind the technique is to reflect a beam of x-rays from a flat surface and to then measure the intensity of x-rays reflected in the specular direction (reflected angle equal to incident angle). If the interface is not perfectly sharp and smooth then the reflected intensity will deviate from that predicted by the law of Fresnel reflectivity. The deviations can then be analyzed to obtain the density profile of the interface normal to the surface.

The technique appears to have first been applied to x-rays by Professor Lyman G. Parratt of Cornell University in an article published in Physical Review in 1954.[5] Parratt's initial work explored the surface of copper-coated glass, but since that time the technique has been extended to a wide range of both solid and liquid interfaces.

The basic mathematical relationship which describes specular reflectivity is fairly straightforward. When an interface is not perfectly sharp, but has an average electron density profile given by

, then the x-ray reflectivity can be approximated by:[6]

is the x-ray wavelength,

is the density deep within the material and

is the angle of incidence. Typically one can then use this formula to compare parameterized models of the average density profile in the z-direction with the measured x-ray reflectivity and then vary the parameters until the theoretical profile matches the measurement.

For films with multiple layers, X-ray reflectivity may show oscillations with wavelength, analogous to the Fabry-Pérot effect. These oscillations can be used to infer layer thicknesses and other properties, for example using the Abeles matrix formalism.