In mathematics and signal processing, the Z-transform converts a discrete-time signal, which is a sequence of real or complex numbers, into a complex frequency domain representation.

It can be considered as a discrete-time equivalent of the Laplace transform. This similarity is explored in the theory of time scale calculus.

The basic idea now known as the Z-transform was known to Laplace, and re-introduced in 1947 by W. Hurewicz as a tractable way to solve linear, constant-coefficient difference equations.[1] It was later dubbed "the z-transform" by Ragazzini and Zadeh in the sampled-data control group at Columbia University in 1952.[2][3]

The modified or advanced Z-transform was later developed and popularized by E. I. Jury.[4][5]

The idea contained within the Z-transform is also known in mathematical literature as the method of generating functions which can be traced back as early as 1730 when it was introduced by de Moivre in conjunction with probability theory.[6] From a mathematical view the Z-transform can also be viewed as a Laurent series where one views the sequence of numbers under consideration as the (Laurent) expansion of an analytic function.

The Z-transform, like many integral transforms, can be defined as either a one-sided or two-sided transform.

where n is an integer and z is, in general, a complex number:

where A is the magnitude of z, j is the imaginary unit, and ɸ is the complex argument (also referred to as angle or phase) in radians.

Alternatively, in cases where x[n] is defined only for n ≥ 0, the single-sided or unilateral Z-transform is defined as

In signal processing, this definition can be used to evaluate the Z-transform of the unit impulse response of a discrete-time causal system.

An important example of the unilateral Z-transform is the probability-generating function, where the component x[n] is the probability that a discrete random variable takes the value n, and the function X(z) is usually written as X(s), in terms of s = z−1. The properties of Z-transforms (below) have useful interpretations in the context of probability theory.

In geophysics, the usual definition for the Z-transform is a power series in z as opposed to z−1. This convention is used, for example, by Robinson and Treitel[7] and by Kanasewich.[8] The geophysical definition is:

The inverse Z-transform is

where C is a counterclockwise closed path encircling the origin and entirely in the region of convergence (ROC). In the case where the ROC is causal (see Example 2), this means the path C must encircle all of the poles of X(z).

A special case of this contour integral occurs when C is the unit circle (and can be used when the ROC includes the unit circle which is always guaranteed when X(z) is stable, i.e. all the poles are within the unit circle). The inverse Z-transform simplifies to the inverse discrete-time Fourier transform:

The region of convergence (ROC) is the set of points in the complex plane for which the Z-transform summation converges.

Therefore, there are no values of z that satisfy this condition. 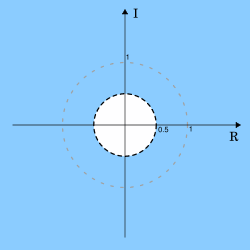 ROC shown in blue, the unit circle as a dotted grey circle (appears reddish to the eye) and the circle |z| = 0.5 is shown as a dashed black circle

(where u is the Heaviside step function). Expanding x[n] on the interval (−∞, ∞) it becomes 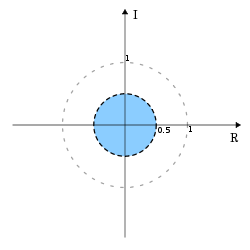 ROC shown in blue, the unit circle as a dotted grey circle and the circle |z| = 0.5 is shown as a dashed black circle

(where u is the Heaviside step function). Expanding x[n] on the interval (−∞, ∞) it becomes

What differentiates this example from the previous example is only the ROC. This is intentional to demonstrate that the transform result alone is insufficient.

Examples 2 & 3 clearly show that the Z-transform X(z) of x[n] is unique when and only when specifying the ROC. Creating the pole–zero plot for the causal and anticausal case show that the ROC for either case does not include the pole that is at 0.5. This extends to cases with multiple poles: the ROC will never contain poles. 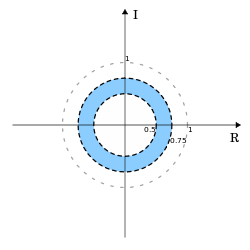 In systems with multiple poles it is possible to have an ROC that includes neither |z| = ∞ nor |z| = 0. The ROC creates a circular band. For example,

If you are provided a Z-transform of a system without an ROC (i.e., an ambiguous x[n]) you can determine a unique x[n] provided you desire the following:

The unique x[n] can then be found.

Initial value theorem: If x[n] is causal, then

Final value theorem: If the poles of (z−1)X(z) are inside the unit circle, then

is the unit (or Heaviside) step function and

is the discrete-time (or Dirac delta) unit impulse function. Both are usually not considered as true functions but as distributions due to their discontinuity (their value on n = 0 usually does not really matter, except when working in discrete time, in which case they become degenerate discrete series ; in this section they are chosen to take the value 1 on n = 0, both for the continuous and discrete time domains, otherwise the content of the ROC column below would not apply). The two "functions" are chosen together so that the unit step function is the integral of the unit impulse function (in the continuous time domain), or the summation of the unit impulse function is the unit step function (in the discrete time domain), hence the choice of making their value on n = 0 fixed here to 1.

For values of z in the region |z|=1, known as the unit circle, we can express the transform as a function of a single, real variable, ω, by defining z=ejω.  And the bi-lateral transform reduces to a Fourier series:

When T has units of seconds,

has units of hertz. Comparison of the two series reveals that

is a normalized frequency with units of radians per sample. The value ω=2π corresponds to

Hz.  And now, with the substitution

Template:EquationNote can be expressed in terms of the Fourier transform, X(•):

When sequence x(nT) represents the impulse response of an LTI system, these functions are also known as its frequency response. When the x(nT) sequence is periodic, its DTFT is divergent at one or more harmonic frequencies, and zero at all other frequencies. This is often represented by the use of amplitude-variant Dirac delta functions at the harmonic frequencies. Due to periodicity, there are only a finite number of unique amplitudes, which are readily computed by the much simpler discrete Fourier transform (DFT).  (See DTFT; periodic data.)

to convert some function

in the Laplace domain to a function

in the Z-domain (Tustin transformation), or

{{#invoke:main|main}} Given a one-sided Z-transform, X(z), of a time-sampled function, the corresponding starred transform produces a Laplace transform and restores the dependence on sampling parameter, T:

The inverse Laplace transform is a mathematical abstraction known as an impulse-sampled function.

The linear constant-coefficient difference (LCCD) equation is a representation for a linear system based on the autoregressive moving-average equation.

This form of the LCCD equation is favorable to make it more explicit that the "current" output y[n] is a function of past outputs y[n−p], current input x[n], and previous inputs x[n−q].

and rearranging results in

where qk is the k-th zero and pk is the k-th pole. The zeros and poles are commonly complex and when plotted on the complex plane (z-plane) it is called the pole–zero plot.

By factoring the denominator, partial fraction decomposition can be used, which can then be transformed back to the time domain. Doing so would result in the impulse response and the linear constant coefficient difference equation of the system.

If such a system H(z) is driven by a signal X(z) then the output is Y(z) = H(z)X(z). By performing partial fraction decomposition on Y(z) and then taking the inverse Z-transform the output y[n] can be found. In practice, it is often useful to fractionally decompose

before multiplying that quantity by z to generate a form of Y(z) which has terms with easily computable inverse Z-transforms.