When the spectral lines are absorption lines, the effect is called inverse Zeeman effect.

Historically, one distinguishes between the normal and an anomalous Zeeman effect that appears on transitions where the net spin of the electrons is not 0, the number of Zeeman sub-levels being even instead of odd if there is an uneven number of electrons involved. It was called "anomalous" because the electron spin had not yet been discovered, and so there was no good explanation for it at the time that Zeeman observed the effect.

In the modern scientific literature, these terms are rarely used, with a tendency to use just the "Zeeman effect".

The total Hamiltonian of an atom in a magnetic field is

is the unperturbed Hamiltonian of the atom, and

is perturbation due to the magnetic field:

is the Bohr magneton,

is the total electronic angular momentum, and

is the Landé g-factor. A more accurate approach is to take into account that the operator of the magnetic moment of an electron is a sum of the contributions of the orbital angular momentum

and the spin angular momentum

, with each multiplied by the appropriate gyromagnetic ratio:

(the latter is called the anomalous gyromagnetic ratio; the deviation of the value from 2 is due to Quantum Electrodynamics effects). In the case of the LS coupling, one can sum over all electrons in the atom:

are the total orbital momentum and spin of the atom, and averaging is done over a state with a given value of the total angular momentum.

If the interaction term

is small (less than the fine structure), it can be treated as a perturbation; this is the Zeeman effect proper. In the Paschen-Back effect, described below,

exceeds the LS coupling significantly (but is still small compared to

). In ultrastrong magnetic fields, the magnetic-field interaction may exceed

, in which case the atom can no longer exist in its normal meaning, and one talks about Landau levels instead. There are, of course, intermediate cases which are more complex than these limit cases.

If the spin-orbit interaction dominates over the effect of the external magnetic field,

are not separately conserved, only the total angular momentum

. The (time-)"averaged" spin vector is then the projection of the spin onto the direction of

and for the (time-)"averaged" orbital vector:

and squaring both sides, we get

and squaring both sides, we get

Combining everything and taking

, we obtain the magnetic potential energy of the atom in the applied external magnetic field,

is the z-component of the total angular momentum. For a single electron above filled shells

, the Landé g-factor can be simplified into:

In the presence of an external magnetic field, the weak-field Zeeman effect splits the 1S1/2 and 2P1/2 levels into 2 states each (

). The Landé g-factors for the three levels are:

Note in particular that the size of the energy splitting is different for the different orbitals, because the gJ values are different. On the left, fine structure splitting is depicted. This splitting occurs even in the absence of a magnetic field, as it is due to spin-orbit coupling. Depicted on the right is the additional Zeeman splitting, which occurs in the presence of magnetic fields.

The Paschen-Back effect is the splitting of atomic energy levels in the presence of a strong magnetic field. This occurs when an external magnetic field is sufficiently large to disrupt the coupling between orbital (

) angular momenta. This effect is the strong-field limit of the Zeeman effect. When

, the two effects are equivalent. The effect was named after the German physicists Friedrich Paschen and Ernst E. A. Back.[2]

When the magnetic-field perturbation significantly exceeds the spin-orbit interaction, one can safely assume

. This allows the expectation values of

to be easily evaluated for a state

. The energies are simply

The above may be read as implying that the LS-coupling is completely broken by the external field. However

are still "good" quantum numbers. Together with the selection rules for an electric dipole transition, i.e.,

this allows to ignore the spin degree of freedom altogether. As a result, only three spectral lines will be visible, corresponding to the

is independent of the unperturbed energies and electronic configurations of the levels being considered. It should be noted that in general (if

), these three components are actually groups of several transitions each, due to the residual spin-orbit coupling.

In general, one must now add spin-orbit coupling and relativistic corrections (which are of the same order, known as 'fine structure') as a perturbation to these 'unperturbed' levels. First order perturbation theory with these fine-structure corrections yields the following formula for the Hydrogen atom in the Paschen–Back limit:[3]

In the magnetic dipole approximation, the Hamiltonian which includes both the hyperfine and Zeeman interactions is

To arrive at the Breit-Rabi formula we will include the hyperfine structure (interaction between the electron's spin and the magnetic moment of the nucleus), which is governed by the quantum number

is the spin angular momentum operator of the nucleus. Alternatively, the derivation could be done with

is known as the zero field hyperfine constant and is given in units of Hertz.

is the Bohr magneton.

are the electron and nuclear angular momentum operators.

can be found via a classical vector coupling model or a more detailed quantum mechanical calculation to be:

As discussed, in the case of weak magnetic fields, the Zeeman interaction can be treated as a perturbation to the

basis. In the high field regime, the magnetic field becomes so large that the Zeeman effect will dominate, and we must use a more complete basis of

will be constant within a given level.

To get the complete picture, including intermediate field strengths, we must consider eigenstates which are superpositions of the

, the Hamiltonian can be solved analytically, resulting in the Breit-Rabi formula. Notably, the electric quadrapole interaction is zero for

), so this formula is fairly accurate.

To solve this system, we note that at all times, the total angular momentum projection

will be conserved. Furthermore, since

will change between only

. Therefore, we can define a good basis as:

We now utilize quantum mechanical ladder operators, which are defined for a general angular momentum operator

These ladder operators have the property

lies in the range

We can rewrite the Hamiltonian as

Now we can determine the matrix elements of the Hamiltonian:

Solving for the eigenvalues of this matrix, (as can be done by hand, or more easily, with a computer algebra system) we arrive at the energy shifts:

is referred to as the 'field strength parameter' (Note: for

the square root is an exact square, and should be interpreted as

). This equation is known as the Breit-Rabi formula and is useful for systems with one valence electron in an

(the only exceptions are 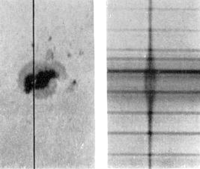 The Zeeman effect is utilized in many Laser cooling applications such as a Magneto-optical trap and the Zeeman slower.

|CitationClass=book }} (Chapter 16 provides a comprehensive treatment, as of 1935.)