In mathematics, the Peano–Jordan measure (also known as the Jordan content) is an extension of the notion of size (length, area, volume) to shapes more complicated than, for example, a triangle, disk, or parallelepiped.

It turns out that for a set to have Jordan measure it should be well-behaved in a certain restrictive sense. For this reason, it is now more common to work with the Lebesgue measure, which is an extension of the Jordan measure to a larger class of sets. Historically speaking, the Jordan measure came first, towards the end of the nineteenth century.

The Peano-Jordan measure is named after its originators, the French mathematician Camille Jordan, and the Italian mathematician Giuseppe Peano.[1]

A simple set is, by definition, a union of (possibly overlapping) rectangles. 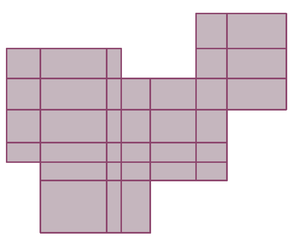 The simple set from above decomposed as a union of non-overlapping rectangles.

Consider the Euclidean space Rn. One starts by considering products of bounded intervals

which are closed at the left end and open at the right end (half-open intervals is a technical choice; as we see below, one can use closed or open intervals if preferred). Such a set will be called a n-dimensional rectangle, or simply a rectangle. One defines the Jordan measure of such a rectangle to be the product of the lengths of the intervals:

Next, one considers simple sets, sometimes called polyrectangles, which are finite unions of rectangles,

One cannot define the Jordan measure of S as simply the sum of the measures of the individual rectangles, because such a representation of S is far from unique, and there could be significant overlaps between the rectangles.

Luckily, any such simple set S can be rewritten as a union of another finite family of rectangles, rectangles which this time are mutually disjoint, and then one defines the Jordan measure m(S) as the sum of measures of the disjoint rectangles.

One can show that this definition of the Jordan measure of S is independent of the representation of S as a finite union of disjoint rectangles. It is in the "rewriting" step that the assumption of rectangles being made of half-open intervals is used.

A set (represented in the picture by the region inside the blue curve) is Jordan measurable if and only if it can be well-approximated both from the inside and outside by simple sets (their boundaries are shown in dark green and dark pink respectively).

Notice that a set which is a product of closed intervals,

Formally, for a bounded set B, define its inner Jordan measure as

and its outer measure as

where the infimum and supremum are taken over simple sets S. The set B is said to be Jordan measurable if the inner measure of B equals the outer measure. The common value of the two measures is then simply called the Jordan measure of B.