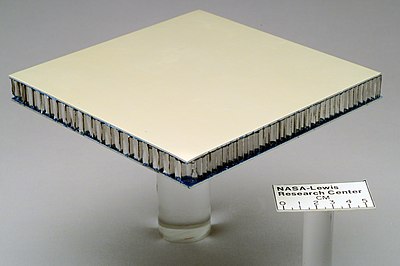 Some advantages of sandwich construction are:

The behavior of a beam with sandwich cross-section under a load differs from a beam with a constant elastic cross section as can be observed in the adjacent figure. If the radius of curvature during bending is large compared to the thickness of the sandwich beam and the strains in the component materials are small, the deformation of a sandwich composite beam can be separated into two parts

Sandwich beam, plate, and shell theories usually assume that the reference stress state is one of zero stress. However, during curing, differences of temperature between the face-sheets persist because of the thermal separation by the core material. These temperature differences, coupled with different linear expansions of the face-sheets, can lead to a bending of the sandwich beam in the direction of the warmer face-sheet. If the bending is constrained during the manufacturing process, residual stresses can develop in the components of a sandwich composite. The superposition of a reference stress state on the solutions provided by sandwich theory is possible when the problem is linear. However, when large elastic deformations and rotations are expected, the initial stress state has to be incorporated directly into the sandwich theory.

Bending of a sandwich beam without extra deformation due to core shear.

In the engineering theory of sandwich beams,[2] the axial strain is assumed to vary linearly over the cross-section of the beam as in Euler-Bernoulli theory, i.e.,

Therefore the axial stress in the sandwich beam is given by

is the Young's modulus which is a function of the location along the thickness of the beam. The bending moment in the beam is then given by

is called the flexural stiffness of the sandwich beam. The shear force

Using these relations, we can show that the stresses in a sandwich beam with a core of thickness

and two facesheets each of thickness

For a sandwich beam with identical facesheets and unit width, the value of

can be approximated as

and the stresses in the sandwich beam can be approximated as

and the approximate stresses in the beam are

If we assume that the facesheets are thin enough that the stresses may be assumed to be constant through the thickness, we have the approximation

Bending of a sandwich beam with thin facesheets

Bending of a sandwich beam after incorporating shear of the core into the deformation.

The main assumptions of linear sandwich theories of beams with thin facesheets are:

However, the xz shear-stresses in the core are not neglected.

The constitutive relations for two-dimensional orthotropic linear elastic materials are

The assumptions of sandwich theory lead to the simplified relations

The equilibrium equations in two dimensions are

Therefore, for homogeneous facesheets and core, the strains also have the form 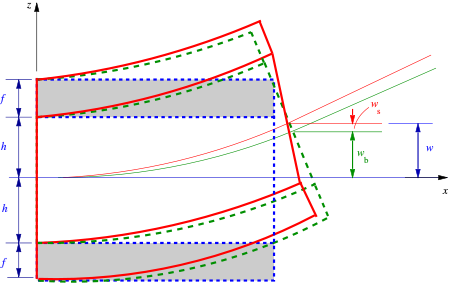 Bending of a sandwich beam. The total deflection is the sum of a bending part wb and a shear part ws

Shear strains during the bending of a sandwich beam.

Let the sandwich beam be subjected to a bending moment

and a shear force

. Let the total deflection of the beam due to these loads be

. The adjacent figure shows that, for small displacements, the total deflection of the mid-surface of the beam can be expressed as the sum of two deflections, a pure bending deflection

and a pure shear deflection

) are assumed in deriving the above relation. The effective shear strain in the beam is related to the shear displacement by the relation

-direction displacements of the facesheets due to bending are given by

and that of the bottom facesheet is

The normal strains in the two facesheets are given by

The shear stress in the core is given by

The normal stresses in the facesheets are given by

The resultant normal force in a facesheet is defined as

and the resultant moments are defined as

In the core, the resultant moment is

The total bending moment in the beam is

in the core is defined as

is a shear correction coefficient. The shear force in the facesheets can be computed from the bending moments using the relation

For thin facesheets, the shear force in the facesheets is usually ignored.[2]

The bending stiffness of the sandwich beam is given by

From the expression for the total bending moment in the beam, we have

For small shear deformations, the above expression can be written as

Therefore, the bending stiffness of the sandwich beam (with

and that of the facesheets is

The shear stiffness of the beam is given by

Relation between bending and shear deflections

A relation can be obtained between the bending and shear deflections by using the continuity of tractions between the core and the facesheets. If we equate the tractions directly we get

At both the facesheet-core interfaces

but at the top of the core

and at the bottom of the core

The above relation is rarely used because of the presence of second derivatives of the shear deflection. Instead it is assumed that

Using the above definitions, the governing balance equations for the bending moment and shear force are

is the intensity of the applied load on the beam, we have

Several techniques may be used to solve this system of two coupled ordinary differential equations given the applied load and the applied bending moment and displacement boundary conditions.

Assuming that each partial cross section fulfills Bernoulli's hypothesis, the balance of forces and moments on the deformed sandwich beam element can be used to deduce the bending equation for the sandwich beam.

The stress resultants and the corresponding deformations of the beam and of the cross section can be seen in Figure 1. The following relationships can be derived using the theory of linear elasticity:[3][4]

and the total bending moment

The bending behavior and stresses in a continuous sandwich beam can be computed by solving the two governing differential equations.

For simple geometries such as double span beams under uniformly distributed loads, the governing equations can be solved by using appropriate boundary conditions and using the superposition principle. Such results are listed in the standard DIN EN 14509:2006[5](Table E10.1). Energy methods may also be used to compute solutions directly.

The differential equation of sandwich continuous beams can be solved by the use of numerical methods such as finite differences and finite elements. For finite differences Berner[6] recommends a two-stage approach. After solving the differential equation for the normal forces in the cover sheets for a single span beam under a given load, the energy method can be used to expand the approach for the calculation of multi-span beams. Sandwich continuous beam with flexible cover sheets can also be laid on top of each other when using this technique. However, the cross-section of the beam has to be constant across the spans.

Schwarze uses the general solution for the homogeneous part of the above equation and a polynomial approximation for the particular solution for sections of a sandwich beam. Interfaces between sections are tied together by matching boundary conditions. This approach has been used in the open source code swe2.

Results predicted by linear sandwich theory correlate well with the experimentally determined results. The theory is used as a basis for the structural report which is needed for the construction of large industrial and commercial buildings which are clad with sandwich panels . Its use is explicitly demanded for approvals and in the relevant engineering standards.[5]