is the characteristic dimension of the obstacle (typically its diameter). Particles with low Stokes number follow fluid streamlines (perfect advection) whereas for large Stokes number, the particle's inertia dominates so that the particle will continue along its initial trajectory. 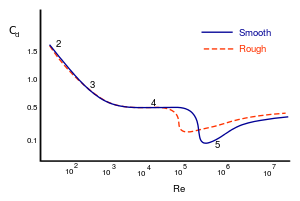 Drag coefficient Cd for a sphere as a function of Reynolds number Re, as obtained from laboratory experiments. The solid line is for a sphere with a smooth surface, while the dashed line is for the case of a rough surface. The numbers along the line indicate several flow regimes and associated changes in the drag coefficient:
•2: attached flow (Stokes flow) and steady separated flow,
•3: separated unsteady flow, having a laminar flow boundary layer upstream of the separation, and producing a vortex street,
•4: separated unsteady flow with a laminar boundary layer at the upstream side, before flow separation, with downstream of the sphere a chaotic turbulent wake,
•5: post-critical separated flow, with a turbulent boundary layer.

is the particle density,

is the particle diameter and

is the gas dynamic viscosity.[1]

In experimental fluid dynamics, the Stokes number is a measure of flow tracer fidelity in particle image velocimetry (PIV) experiments where very small particles are entrained in turbulent flows and optically observed to determine the speed and direction of fluid movement (also known as the velocity field of the fluid). For acceptable tracing accuracy, the particle response time should be faster than the smallest time scale of the flow. Smaller Stokes numbers represent better tracing accuracy; for

, particles will detach from a flow especially where the flow decelerates abruptly. For

Application to anisokinetic sampling of particles

For example, the selective capture of particles by an aligned, thin-walled circular nozzle is given by Belyaev and Levin[3] as:

is speed, and the subscript 0 indicates conditions far upstream of the nozzle. The characteristic distance is the diameter of the nozzle. Here the Stokes number is calculated,

is the particle's settling velocity,

is the sampling tubes inner diameter, and

is the acceleration of gravity.