The proof that AT is closed under addition relies on the commutativity of addition (see examples section).

For any abelian group

and any prime number p the set ATp of elements of A that have order a power of p is a subgroup called the p-power torsion subgroup or, more loosely, the p-torsion subgroup:

When A is a finite abelian group, ATp coincides with the unique Sylow p-subgroup of A. 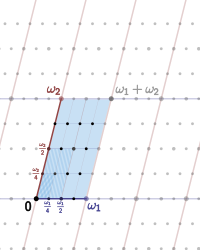 The 4-torsion subgroup of the quotient group of the complex numbers under addition by a lattice.

the element xy is a product of two torsion elements, but has infinite order.